END_OF_DOCUMENT_TOKEN_TO_BE_REPLACED

Big news on US bonds, three decades after the bull market began...

Copper prices were up 4.5% in New York yesterday...and copper is generally a leading indicator of economic growth, because of its use in new construction of housing and commercial property.

Dr.Doom might just be in agreement with Dr.Copper, as the metal is sometimes called for its ability to "diagnose" the economic outlook. Swiss-born wealth manager Marc Faber – author of the ever-excellent Gloom, Boom & Doom Report and now based in northern Thailand – writes in his latest letter that the picture is no longer unequivocally bad everywhere.

Dr.Faber has quite a bit to say about whether the large rallies in global stock markets since March (and earlier in some cases) constitute a recovery in the economy or just a "bear market rally". He says that:

"At least in nominal terms, the global printing presses being run by the world's central banks and fiscal deficits have begun to impact asset prices positively."

This is a concession that the big Quantitative Easing efforts of the Fed have found their way into bond prices and certain other sectors. Also, by trashing cash the Fed has made stocks look relatively more attractive. Dr.Faber also thinks that, "In the case of resource and mining stocks, as well as Asian equities (and, for that matter, most emerging and other stock markets around the globe), the lows that were reached between October and March of this year are likely to hold-that is, for now."

And what about Australia specifically? He did not single the country out. But he did say that, "The markets that have the highest probability of having made major longer-term lows are resource-related equities, emerging markets, and Japan."

"Conversely," he writes, "the asset market that has the highest probability of having a made a secular high (such as Japan in 1989, or the Nasdaq in March 2000) is the US long-term government bond market...

"Despite a still-weakening economy and massive quantitative easing, long-term bond yields appear to be on the verge of breaking out on the upside."

Dr.Faber appears to be right. And we have the chart to prove it (courtesy of www.bigcharts.com...)

The chart tracks the yield on 30-year US bonds over the last year. We've included two moving averages (MA), a shorter-term 50-day MA and a longer-term MA of 100 days.

So what story does this chart reveal? The really interesting point on the chart is in mid-March. But we'll get to that in a moment.

For one, you can see that in Nov. '08, when the Fed first announced its intention to buy mortgage-backed securities, it sent the 30-year yield cliff diving. And remember, because bond prices move inversely to yields, this sent 30-year bond prices up (which would have been good if you were a large holder and eager seller of those bonds like, say, China).

But at the turn of this year, when the stock market swooned once again, 30-year yields started creeping up again, because prices were falling as bond investors began doubting the Fed's resolve (or ability) to keep rates low with regular purchases (a.k.a. Quantitative Easing).

So come mid-March, that's when the Fed said it would buy up to $300 billion in Treasuries, printing money to hold down long-term yields. Yet from a technical perspective, this is exactly the point the short-term moving average (50 days) crossed over the longer-term moving average (100 days). In other words, when the Fed announced it would be coming into the market to buy bonds, 30-year yields experienced what technical analysts might call a bit of a breakout.

Now, whether people began selling bonds because they thought stocks were a better bet, or for some other reason, we can't say. What we can say is that this chart may indicate the Fed's basic inability to control interest rates even with Quantitative Easing.

If ten-year yields keep rising too, the Fed is going to have to come back to the market with something even more jaw dropping. But will the market believe it? Or is Dr. Faber right? Has the secular bull market in long-term bonds – starting way back in 1981 when the 30-year bond offered 15% interest per year – been killed at the very same moment that the Fed stepped in to support long bond prices and try to force yields down?

We think the question is important, because there is a lot of cash on the sidelines at the moment. Higher yields may suck in some cash looking for safety. But we reckon higher bond yields could just as easily trigger a bigger move into stocks. This would get a lot of people who are sitting on the fence back into the market. The rally would go even higher. And then?

That depends on the US economy. And on that score, this week's GDP figures also revealed two important numbers. Residential investment (housing) declined at a 38% annualized pace in the first quarter of the year. It's been falling for 13 consecutive months, but this latest performance was by far the worst of the lot.

If businesses are not investing now, where will GDP and wage growth come from later this year? We have a possible answer. But before we get to it, let's look at another chart.

The chart from the excellent bloggers at www.calculatedriskblog.com shows the respective contributions of residential and business investment to US GDP. So what story does this chart tell? 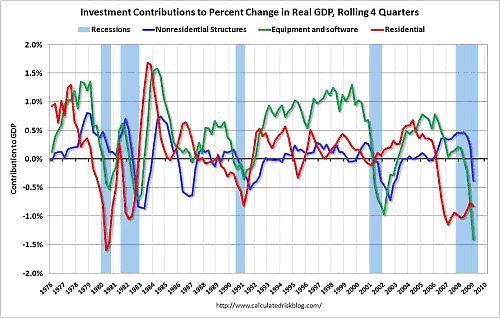 This chart is telling us that during previous recessions, residential investment tended to recover ahead of business investment.

In other words, it's telling us that households begin to spend again before businesses do. We can't quite work out why that might be (if it's actually correct, that is). It could be that at the low point of a recession, interest rates decline low enough to finally stimulate new demand for mortgages. The rates suck households in and the new housing activity stimulates the rest of the economy.

We're not saying we buy that theory. But the chart indicates a bounce in residential investment. Our suspicion is that the bounce is re-financing activity at lower interest rates or foreclosure sales (which are doing a ripping business in California). In other words, most of the activity in the housing market is coming from market-clearing prices being reached in the most over-priced markets.

The big question is if the up-tick in home sales (and residential investment) actually stabilizes house prices. If those keep falling, there could be a whole new wave of defaults and foreclosures that sweeps the US market. This would have follow-on effects for the banks (more stress, loan losses, capital raisings) and for the job market (thus the economy).

It's also possible more people lose their houses anyway, even if prices stabilize. How? The economy. If the unemployment rate keeps going up, you can expect more Americans to lose their homes.

So it's a bit of chicken and an egg situation for the stock-market-economy complex right now. Will housing investment lead to an economic recovery? Or will higher unemployment blow out the housing investment rebound and send us all into wave two of the Great Credit Depression?

This brings us back to the question of US wage and GDP growth this year. If it's not going to come from the corporate world (still busy cutting costs and shedding jobs), is it really possible for housing to lead the American economy out of recession in 2009?

The only way we can see that happening is if the Fed is even more massively involved in supporting the mortgage-backed securities market than it already is. It's committed $1.25 trillion to the market already. This backing could make it possible for millions of homeowners to refinance into new fixed rate 30-year loans this year. And if that happens, then you might see that housing-led recovery. Don't hold your breath, however.

Goldman Sachs reckons the US government will have to raise $3.25 trillion in the debt markets this year to make up for the Federal budget deficit of $1.75 trillion and to fund the Fed's various credit-easing operations. And if the Treasury can't raise the money for the Fed on favorable terms via the Treasury bond market, then what do you think the Fed will do with its printing presses...?