END_OF_DOCUMENT_TOKEN_TO_BE_REPLACED

To Trade Gold is to know when you've got "right of way"...

The TRADING SCARS we all bear are reminders that the technical aspects of trading are very important to a short-term position trader, write Gene Arensberg in his Got Gold Report.

Survivors of the Gold Trading battlefield are the ones who learn not to fight the market. When the market isn't doing what you expect, then it's time to get cautious...to get defensive...until the "market comes to its senses" or until we do.

Those US readers who took a driver's education course in the early 1970s may remember a 16-mm movie we youngsters at the time were compelled to watch. A somber-faced announcer at the beginning of the movie looked straight at the audience. Speaking in an authoritative baritone, he got everyone's attention.
"Look around you," he said. "Some of the people in this classroom are not going to be with us ten years from now. They won't be with us because they are here!"
With that the scene cuts to a very large cemetery with a burial ceremony in progress. The focus begins with a crowd of mourners obviously in shock as a young victim of an auto accident is laid sorrowfully to eternal rest.

As the camera slowly panned-right, across a forest of tombstones, the announcer went into his message about how safe driving was all about defensive driving. About not getting cocky, or being reckless and most of all, watching out constantly for – and getting away from - those who are dangerous.

Now, nearly forty years later, it is difficult to remember everything in that scary movie, but one sentence from it is forever etched into many memories:

Announcer: "That graveyard is full of people who thought they had the right-of-way."

How true is that in driving and in a whole host of life's experiences? One can be dead right about something fundamentally, but just plain dead if not careful to avoid those who are reckless or intent on ignoring the fundamentals.

Are we cautious? Yes, absolutely - most of the time. Are we sometimes too quick to run to the sidelines? Yes, we veteran gold traders do that sometimes.

Just below is the short-term gold graph with last weekend's annotations. 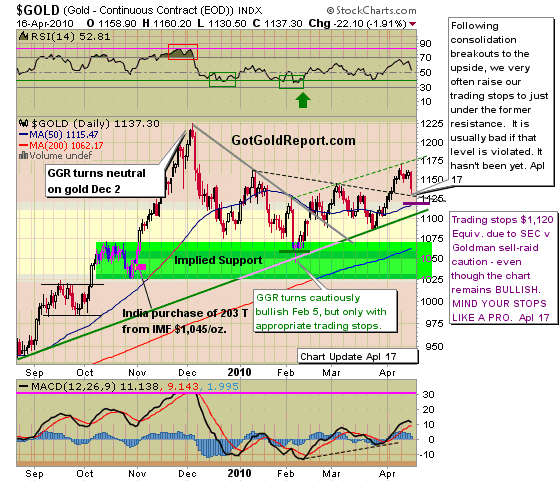 To answer a couple of email questions, yes, we here at the Got Gold Report are moving our trading stops up on the SEC vs. Goldman news (see the graph above) and no, we would not have moved them up from the $1105 region had that news not surfaced last Friday.

We fully expect gold to bounce back sharply, but what if we are wrong? What about our hard-won profits since our February re-entry into the gold market?

The short side of the gold battlefield (whom the US regulators have given an edge via virtually unlimited exemptions to futures position and accountability limits), often probes the price lower in order to trip trailing and trading sell stops. Who can blame them for doing that? If the government gives you an edge, shame on you if you don't take advantage of it, right? What good is a CFTC-sponsored trading advantage if one doesn't use it from time to time?

The market was apparently shocked,..shocked!...to learn that Goldman Sachs is not "The Goldman Sachs Benevolent Association", but is instead a predatory financial game-rigger that actually profits from favoring particular hedge funds over foreign institutional investors – at least according to US finance regulators, the SEC.

Everyone by now has learned about the high-profile SEC shootout with Goldman, so we won’t dig too deeply into that hole in this Commitment of Traders update. The knee-jerk reaction by the helium-filled Big Markets is understandable given the market’s recent levitation. What IS surprising, at least to us, was a similar sell-down on just about all the commodities we follow which are more or less unrelated to the financials.

Or are they? Gold, for example plunged over $20 (nearly 2%) in the span of half an hour, largely on the notion that John Paulson’s family of funds are one of the largest investors in GLD, the largest Gold ETF. Paulson & Company is connected to the SEC-Goldman news, but is not named in the SEC civil action.

Even more bizarre was a lightening-fast 70-cent (almost 4%) dive lower for silver futures on the COMEX immediately following the SEC's strategically timed Friday-just-before-options-expiry salvo at Goldman.

As of the Tuesday cut-off for official Commitment of Traders data from the CFTC, the largest gold and silver futures hedgers and short sellers in New York did indeed increase their collective net short positioning, which indicates they believed that the path of least resistance of the precious metals was lower, 3 days before the SEC/Goldman news.

We think Friday's sell-down was a knee-jerk reaction that wasn’t really justified by the actual news event, but are we willing to hang our short-term profit hat on it?  Nope. Although our longer-term outlook for gold and Silver Prices remains cautiously bullish and the bullish technical picture is unblemished, we here at the Got Gold Report, looking to Trade Gold – rather than simply hold it outright long-term – will tighten our short-term trading stops, preferring to be a "little right" – and get paid for it – rather than standing on principal and potentially not getting paid.

Want to Trade Gold at live prices online, with direct access to the spread...? Go to BullionVault now...