END_OF_DOCUMENT_TOKEN_TO_BE_REPLACED

THERE is a widespread notion among investors, analysts and pundits that the escalating trade conflict between the US and its trading partners is bad for the global economy, writes Lobo Tiggre (aka Louis James) of the Independent Speculator in this article for The Gold Report.

This is no stretch. The leap from there to it being bad for commodities is understandable, but less certain. Still, people who should know, like those running the world's largest mining company, are saying it's so.

Is it any wonder, then, that we've seen the rally in commodities that started in 2016 start to peter out? 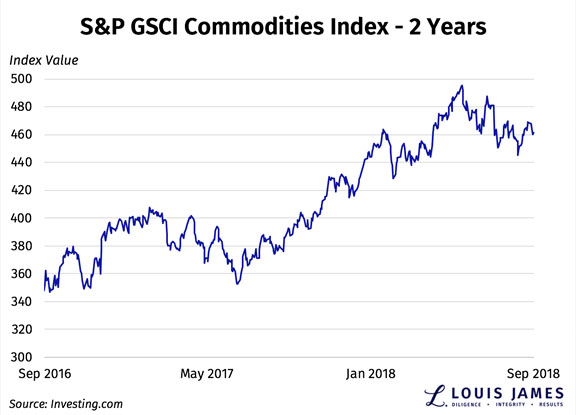 The chart sure looks like a wave cresting – but how do we know it's the trade conflict that's causing it?

In truth, we don't. But the recent downturn includes commodities facing structural supply deficits, like copper and nickel. That clearly isn't being driven by fundamentals. This leaves "investor sentiment" as the likely cause – and that's often driven by perception more than reality.

Have a look at this chart, which zooms in on the GSCI Commodities Index since the start of the current trade conflict. 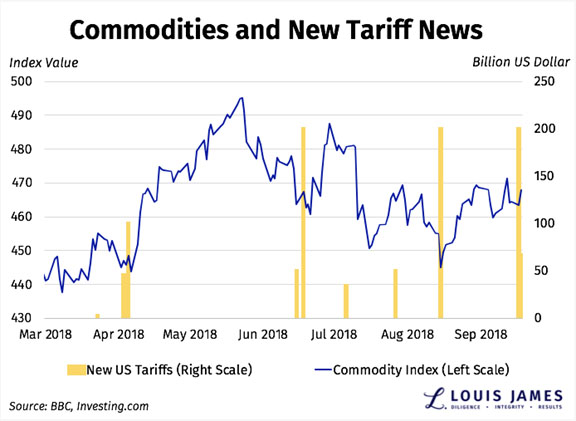 There's no smoking gun on this chart. In fact, commodities rose after the US fired the first salvos in the conflict.

On the other hand, the blows kept coming, and their cumulative impact does seem to be weighing on commodities prices.

This much is largely understood. What seems to get left out of this discussion, however, is that the US, the EU, China, India and many emerging economies are still reporting economic growth. Problems in Turkey and Argentina do not cancel out the massive growth in so much of the rest of the world.

There's a problem with believing that the global economy is growing and at the same time believing that there should be lower demand for the raw materials that make that growth possible. One might argue that investors are reacting now to lower demand in the future. Fine. But then why aren't investors bailing on equities and other assets that would be hurt by the same global economic downturn?

But there's another, much more fundamental and solid reality here that's relevant: the world's population isn't getting any smaller. Even if global DGP growth stalls, as long as the number of people in the world keeps increasing, that's bullish for metals, industrial minerals, agricultural commodities and everything else all those people will need. There will always be cycles in commodities markets, of course, but this underlying trend will keep pushing general demand for decades to come.

What does all this mean, in practical terms, for resource investors?

It means we should be cautious about speculating in commodities, just because they "should" go up.

Until the general upward trend for all commodities is reestablished, we invest only in the ones that are already going up.

For metals investors, that's uranium and vanadium this year. Vanadium has doubled this year, but it's a tiny, more speculative market. Uranium is up about 37% this year, but that's a stellar performance compared to other metals. This makes uranium as the best driver of value in resource stocks at present.

That said, I'm not just arguing for uranium just because it's up. Its price remains well below the cost of production at a time when demand is increasing. China is building scores of nuclear power plants, and even Japan has plans to re-start 30 of its reactors. The world may someday abandon nuclear fission for power, but that day is decades away. This is why I have had no doubt for years that uranium must rise. What's different now is that it's actually happening.

Of course, a rising tide does not lift all ships equally – especially not the ones with holes in their hulls. Picking the right uranium stocks is essential at this time.