END_OF_DOCUMENT_TOKEN_TO_BE_REPLACED

A fruitful visit to the University of Texas in Austin...

I SPENT a couple of days in Austin recently, at the University of Texas (UT), attending a conference on oil, natural gas and energy issues, writes Byron King for Bill Bonner's Daily Reckoning.

But the first thing that grabbed my attention was gold!

According to Kyle Bass, one of the directors of the UT endowment fund, "Central banks are printing more money than they ever have, so what's the value of money in terms of purchases of goods and services? I look at gold as just another currency that they can't print any more of."

Indeed. Good academic governance starts at the top, right? What's not to like?

It's a delightful place. Founded in 1883, UT today has about 50,000 undergraduate and graduate students, including over 5,000 in engineering. Overall, the school awards about 12,000 degrees per year, across many fields — arts and sciences, engineering, medicine, law, etc.

UT boasts a beautiful campus — spotless, actually — nicely laid out. The architecture has roots in Spanish Mission style, and there's a thoughtful, consistent mix of old and new. I'm compelled to note, however, that the campus-dominating Darrell Royal Memorial Stadium sort of reminds me of the giant alien spaceship from the movie District 9.

The UT locale is right down Congress Street, a few blocks from the impressive Texas state capitol building. Everything seems to be close to everything else at UT. The overall school ambience is pleasant. The place is filled with friendly, smiling young people who walk tall, look you in the eye and say hello.

"The kids enjoy it here," said one faculty member with whom I spoke. "You can sort of see it in the delayed graduation rates. Maybe it's a sign of the times, but we have students who slow down toward the end. They just don't want to leave. And then? When we finally push them out the door? Well, Austin has some of the best educated taxi drivers you'll ever find."

All in all, it was a nice visit to a great school — truly a national asset. Oh, and the energy conference was fabulous too…

The conference took place in the UT Alumni Center, which is right across the street from the aforementioned Darrell Royal Memorial Stadium. Makes sense, right? Keep the football fans near and happy.

The first thing that happened when I walked into the main event room was that I (almost literally) bumped into Scott Tinker, the state geologist of Texas. I met Scott a few years back, at an energy conference in Cape Town.

Among other things, Scott is a third-generation oil guy. He worked in the oil industry before moving into academe. He's on the geoscience faculty at UT. He's a past president of the American Association of Petroleum Geologists (AAPG). He sits on the National Petroleum Council. And Scott is a wealth of information about all things having to do with hydrocarbons.

In his talk to the meeting, Scott started out with a very basic point. He showed a graph of global population growth and rising energy use. The image showed an astonishing correlation. "Energy is about people," he noted, to lay the foundation point, which was/is that rising energy demand is a fact of life and will remain so for a long time to come. The question is where will the world get all that energy?

Then Scott moved to the technical side of things. He discussed recovering hydrocarbon molecules from "tight" formations like shales via hydraulic fracturing — "fracking." The presentation touched an area known as "petrophysics," or how fluids behave inside rocks. Scott's talk included a series of slides taken at superhigh magnification, just to illustrate the literal size — or, better, lack of size — of the pores in those tight rocks.

When you frack a formation and attempt to recover gas or oil from shale, for example, you're dealing with ultra-small pore volumes inside rocks — volumes that make the width of a human hair look like the Golden Gate Bridge. As a matter of chemistry and physics, shale oil/gas moves at scales where hydrocarbon molecules behave in odd ways, because they're acting at just slightly over an atomic level.

The behavior of hydrocarbon molecules at near-atomic scales kicks up an entirely new set of questions. Basically, do the old, classical rules of oil and gas engineering still apply?

In other words, is Darcy's law – describing the flow of a fluid through a porous medium – still valid? Hey, you can't drift away during these technical points. This last item, about Darcy's law, is key to understanding what's happening out in the oil biz these days. It's critical to understanding where things are headed — micro and macro.

"Here at the University of Texas, even among the faculty," added Scott, "we don't understand a lot of what's happening in these tight rocks a whole lot better than our students. We're figuring it out too."

Which is not to say that a lot of people aren't drilling and fracking a lot of wells in a lot of formations across the country and producing a lot of oil and gas. It's just to say that the state of the art — even at a fabulous, historic, energy-focused legacy institution like UT — is still finding its learning curve.

It also means that "we" — as in the US and the rest of the energy-consuming world — are a long way from being able to make clearheaded, long-term energy policy and investment decisions based on true understanding of the fracking technology upheaval.

Recently, I described the complexity of drilling a new type of well and fracking the reservoir rock. I discussed fracking and the cost and complexity of these new wells and production techniques.

Back in October, I stated, "Even the 'good' case for fracking ought to make you stop and think. Fracked wells tend to cost five times what wells used to cost, and then your well depletes twice as fast. That makes for a factor of 10 in terms of reduced investment efficiency."

Here's another way of looking at it. Let's graph out the rapid decline rates for new wells. Indeed, across a multitude of shale gas plays, fracked wells decline in the range of 40% during the first year of operation. Much of the estimated ultimate recovery (EUR) is upfront. Look at the production profiles in this image. 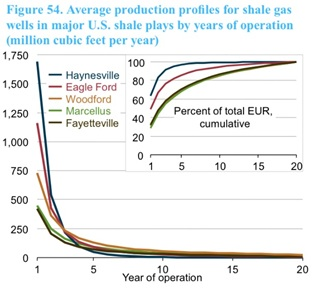 In other words, no sooner have you drilled your well than it's instantly entering a phase of dramatic depletion. It's Darcy's law at work — or not, per Scott Tinker's excellent points.

Now, if you're an operator, suppose that your new well is producing all its product upfront, and it's an era of historically low pricing. Whoops. You've drilled a well that needs $7 natural gas to pay off, but you're collecting only $3.50 at the wellhead. There goes the whole economic case for what you're doing.

And suppose you're that operator, looking ahead to maintaining output. Your new well is fast depleting, so now you almost immediately must drill another well, with more wells to follow. Welcome to the drilling treadmill. What's the capex? What's the cash flow? Are you making money? Who's your banker? What about those shareholders, eh?

Then looking ahead, by year five, you've got little more than a low-volume, high-maintenance "stripper" well. Great business model, right?

At a larger scale of thinking about it, is this kind of energy treadmill really the way to energize the national economy? What are the inputs versus what's the value of the output? It gets into that "energy return on investment" (EROI) idea.

Just consider what it "costs" to drill and frack each well. Consider the geologic work, the geophysics, leasing, permitting, pre-drill engineering, site-construction, drilling, completion, fracking, operations and maintenance. Did I miss anything? Darn right I did… this is a SHORT list!

Now consider the externalities. Think of the land use issues. Think of the traffic from hauling stuff in and out, tearing up the roads and bridges. Think of the water use. Think of the pipeline grid that has to be built out. There's a long list of other issues. All for wells that offer a quick pop of hydrocarbon and then decades of stripper status.

Yes, all of this makes for jobs for geologists, landmen, lawyers, bureaucrats, engineers, drillers, truck drivers, backhoe operators, well loggers and much more.

But long term, it tightens the economics of energy production. How investable is this? Good question.

Looking to get some exposure to gold or silver? Visit BullionVault...