END_OF_DOCUMENT_TOKEN_TO_BE_REPLACED

"DON'T TAX you, don't tax me, tax the guy behind the tree" is one of those useful aphorisms of government, writes Nathan Lewis at New World Economics in this post first published at Forbes.

It describes, in a few words, the organizing principle behind the tremendous scrum of tax favor peddling that takes place in Congress today, and which took place in all cultures throughout history.

The quote is ascribed to Senator Russel B.Long in 1973, who, during his seven years as chairman of the Senate Finance Committee, heard hundreds of variations on this theme.

Today, the list of government services has gotten a lot longer than this, encompassing hundreds of welfare-type programs, public education, crony capitalist handouts, and other such schemes. And, naturally, we don't want to pay for it.

This is a very old topic, and produced a very old principle, which we today are strangely ignorant of. The principle is that of Uniformity in taxation.

This is, of course, precisely the opposite of the reigning principle today, which is Progressivity (or Discrimination; treating individuals differently) in taxation. The first principle was held by James Madison, who wrote it into the Constitution. The second principle was held by Karl Marx, who wrote it into the Communist Manifesto. Unfortunately, many people today who think they like Madison more than Marx, nevertheless hew to Marx on taxation issues.

An unhealthy precedent in this matter was set by John Stuart Mill in the mid-nineteenth century, who began as a defender of Liberty and ended up a socialist. I myself have been in this camp in the past; but, I changed my mind. 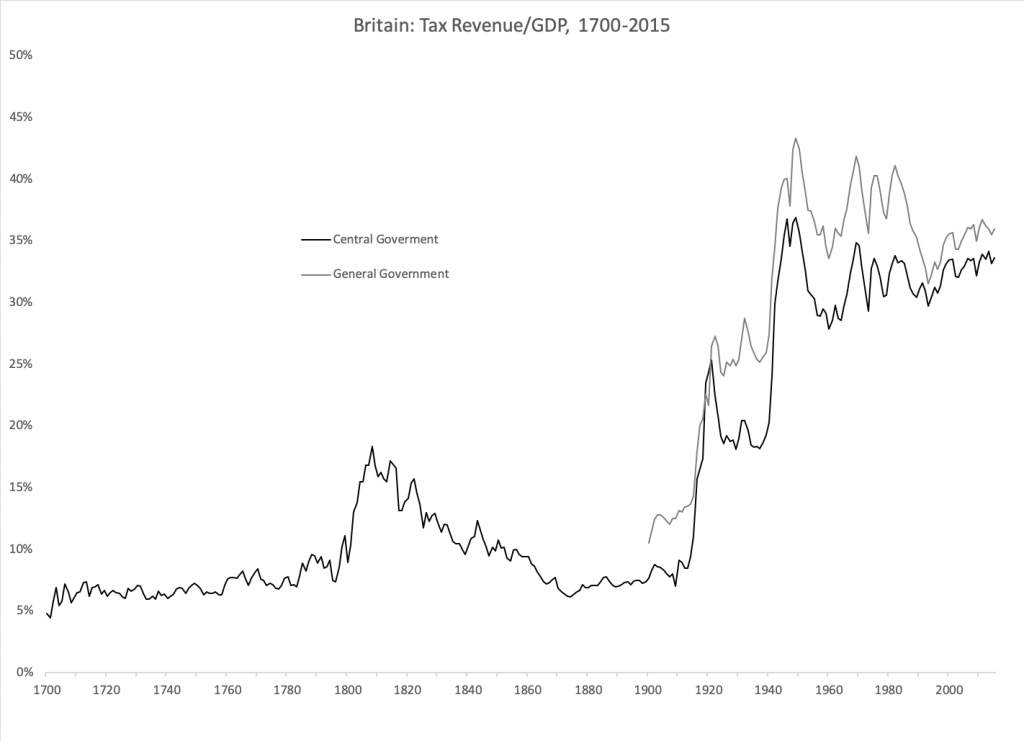 You can go back quite a ways in human history and find examples where the politically dominant would evade taxation, and consequently, overtax the politically disenfranchised (the "guy behind the tree").

Not surprisingly, the untaxed nobility etc also tends to be in favor of greater government spending, which they can gain advantage from, without having to pay for. Government employee headcount soars. The oppressive taxes on the economically productive classes leads to economic stagnation and decline, which in turn produces depressed tax revenues; political instability; increased spending to placate the angry masses; increased spending to placate the favored aristocratic classes, who form the sole support for the government; an inability to fund the military; and exposure to foreign military opportunism. Eventually, even the nobles themselves agree that this system is a disaster. It is part of what I called the "Spiral of Decline".

We see this pattern in the decline of the Spanish Empire, in the sixteenth and seventeenth centuries (which I described in my book The Magic Formula). We see it again in France before the revolution in 1789. We see it in British history: a major purpose of the Magna Carta of 1215 was to require the King to get the consent of the taxed before the imposition of any taxes. This became the foundation of Britain's Parliament; and as a result, Britain had the lowest taxes in Europe for centuries before World War I. Ireland, however – which had been under British rule since 1168 – did not have representation in Parliament; and consequently, suffered under oppressive taxes for centuries. The early American colonists, who were of course from Britain, understood this well. It is easy to see why they were so concerned about "taxation without representation." They didn't want to become the overtaxed peons of Ireland or pre-revolutionary France.

While this was a common pattern for monarchies, James Madison, the primary author of the Constitution, argued in the Federalist #10 that, in a democracy, the majority would tend to overtax the minority. This led to the "uniformity clause" in Article I Section 8, which reads: "all Duties, Imposts and Excises shall be uniform throughout the United States." This was before the modern income tax was introduced by Britain in 1799, to help pay for the war with Napoleon. So, it is a little unclear here that this might refer to something like a single rate of income tax. Also, direct taxation (such as an income tax) was effectively prevented by the Constitution until the Sixteenth Amendment of 1913.

However, in the same year of 1789, the first post-revolutionary French Constitution was written, which said in Article 9:

Pecuniary privileges, personal or real, in the payment of taxes are abolished forever. Taxes shall be collected from all the citizens, and from all property, in the same manner and the same form. Plans shall be considered by which the taxes shall be paid proportionately by all, even for the last six months of the current year.

Here we see that the idea of "uniformity" meant "proportionality": in proportion to spending (as in an indirect tax like a sales tax) or perhaps income (as in a direct tax like an income tax). "Pecuniary privileges" – such as avoidance of taxes, or different tax rates for one person and another – would be abolished.

The British writer J.R. McCullough summed up the Enlightenment-era principle of "uniformity" in his book Taxation and the Funding System (1845):

"The moment you abandon the cardinal principle of exacting from all individuals the same proportion of their income or of their profits you are at a sea without a rudder or compass and there is no amount of injustice and folly you may not commit."

McCullough was not just fantasizing in private, as we are doing here. The wartime British income tax was considered an abomination, and was abolished in 1816. Britain returned to a system of indirect taxes (sales taxes and tariffs) only, which naturally did not discriminate between persons.

However, this system was rather overcomplicated and inefficient, and naturally led to its own political scrums (just as was the case for the United States' similar system of excises and tariffs before 1913), so in 1842 Britain introduced its first peacetime income tax, at a rate of 3%. This allowed the reduction of tariffs on more than 750 items, including the repeal of the Corn Laws in 1846, which were implicated in the famine in Ireland during that time. Britain made a turn toward free trade in general.

This first income tax nevertheless included the principle of "uniformity". There was only one rate, and the tax was mostly administered somewhat like a payroll tax today, basically as an indirect tax. There was no "tax return".

For nearly seventy years, until "progressive" graduated rates were introduced in 1910 following the principles of Marx, the principle of "uniformity" prevailed. All British citizens faced the same tax rate. All British felt a rise in the tax rate; all British enjoyed a decline. You couldn't "tax the guy behind the tree."

There were no "pecuniary privileges." There was no contention between one group and another, in a struggle for advantage. In seven decades, the rate never rose above 6%. McCullough's principles were at the core of British statesmanship. With Low Taxes and Stable Money, Britain became the birthplace of the Industrial Revolution, and the finance capital of the world. The British Empire spanned the globe.

We forget that we shared the same principles in the United States. In 1894, Democrats in Congress passed the US's first peacetime income tax. In 1895, the Supreme Court found it unconstitutional, and eliminated it. In that decision, Supreme Court Justice Stephen J.Field found:

If the Court sanctions the power of discriminating taxation and nullifies the uniformity mandate of the Constitution...it will mark the hour when the sure decadence of our government will commence. 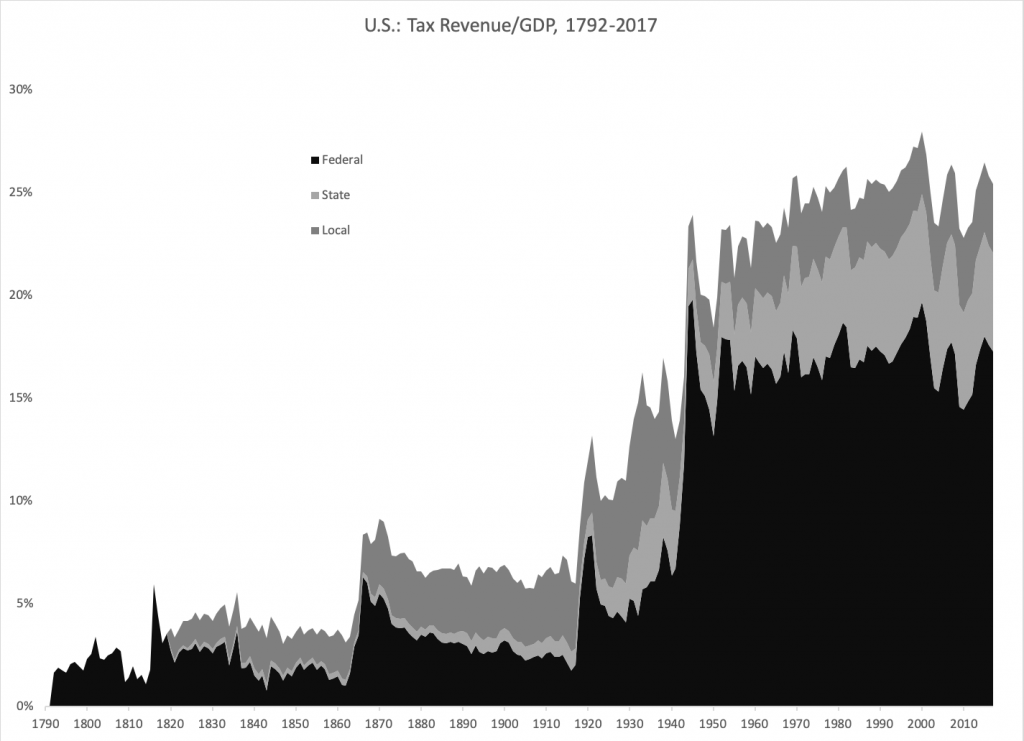 In Madison's time, the Federal government was to stick to the Enumerated Powers, which were basically foreign policy and the military. This was known as the "general welfare," and was included as the "general welfare clause" in Article I Section 8. The military, domestic justice, and such things as acquisition of new territory (including the Louisiana Purchase of 1803) benefitted all citizens "generally." You couldn't easily identify any one person gaining a specific advantage, or "specific welfare," as is the case for all means-tested welfare benefits, corporate subsidy, itemized tax breaks and thousands of other such things today.

Today, we have "discrimination" in taxation, combined with "specific welfare," which means, in blunt terms: getting benefits that somebody else pays for. "Injustice and folly" is the expected outcome, and our own history since 1913, which Democrats today seem ready to ramp up to a whole new level.

If every American had to pay the same tax rate, from the first Dollar to the last, with no exemptions and deductions (in other words, much like today's payroll tax, with the same rate on business), what would that rate be? What government services would we consider necessary, even when all Americans had to pay for them proportionally?

The answers to those questions describe the gulf between where we are today, and the greatness of our forefathers.