END_OF_DOCUMENT_TOKEN_TO_BE_REPLACED

Yes, really. Tapering QE could be the catalyst for sharply higher inflation...
LAST JUNE, when tidbits about a would-be future 'taper' of the US Fed's T-bond purchases (QE) were popping up in the media, we put forward a theory, writes Gary Tanashian in his Notes from the Rabbit Hole.
A tapering of bond monetization, we said, could begin to act as a delivery mechanism for inflation, with banks and lenders the key...
In short it all plays into the current theme that while things may remain positive for the economy and the stock market for a while yet, it is no longer a Goldilocks-style bullishness with US stocks sucking up all of the (inflationary) benefit.
The primary reason I dug this old subject back up is this post,  What's behind the sudden improvement in US loan growth?, by Sober Look (with contributing views from Barron's and ISI Research). The subject matter caught my eye after an NFTRH subscriber sent me a link to it. Finally, the funds are getting out there into the economy! Well, who's surprised? With due respect to the author, there is nothing sudden about this situation. As we wrote last June...

"The Bank Index ratio to the S&P 500 (BKX-SPX) is breaking out to the upside in defiance of a bear case in stocks. The BKX has modestly led the SPX since 2011. We have noted that this is a necessary bullish factor for the financialized economy, which is quite different from a real or organic economy.
"Remember the 'carry trade' of the Greenspan era? That would be the same carry trade that helped bloat the banking sector, putting its big, fat too big to fail hands in just about every cookie jar in America.
"The banks love rising long-term yields because they basically receive free money from the Federal Reserve as the first users of newly created funds on the short end, which is being held down by ZIRP. They then roll these funds into loan products, mark them up per long-term yields and voila, instant profits courtesy of a 'borrow short, lend long' gimmick.
"Let's see how this develops, but we should note that Bernanke has not created anything new under the sun. The great carry trade of last decade was just another unnatural systemic stress that led to the 2008 resolution.
"Do you suppose that Fed officials are ready to let the banks do the heavy lifting, now with the incentive (carry) to get the funds 'out there' to the public? This condition came hand in hand with an inflation problem last decade and now that everybody seems to know there is no inflation, would not a new phase of rising inflation expectations go well right about now?"

"It's worth mentioning that the bottom in loan growth just happened to correspond to the start of Fed's taper. Coincidence?"

"The key to this change in trend is that improvements in loan growth have been primarily driven by a sudden jump in corporate lending. Why is corporate America increasing its borrowing all of a sudden? The most likely answer is the improvement in capital expenditures (capex), which is evidenced by firmer capital goods spending by US companies."

In my opinion that is the tail wagging the dog. 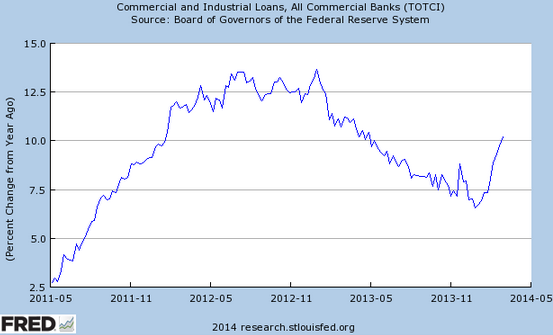 A frustrating aspect of the entire recovery out of 2009 has been lenders' refusal to lend sufficiently for the economy to gain traction. It was not so much a demand (for credit) problem as creditor reluctance or even outright fear.
It is not corporate CapEx that is the driver but very simply, the ability for corporations to gain access to plentiful funding with a now incentivized banking sector. Sober Look:

"Thus the similarities in timing of the bottoming of loan growth in the US and the start of Fed's taper may not be a coincidence after all."

No, not at all. The trail of bread crumbs was visible over 9 months ago as the Fed started to leak a coming QE taper, which would be the ultimate kick start to the activation phase of the inflation, where the banks are now incentivized to get the inflation 'out there', right down Main Street, USA.