END_OF_DOCUMENT_TOKEN_TO_BE_REPLACED

Who chose to "taper" the US Fed's QE program? How would tapering hit the carry trade?
I HAD ALREADY been thinking about trying to put this all together in a logical sequence since 'T2C' was graduated to an actual plan from a thesis last week, writes Gary Tanashian in his Notes from the Rabbit Hole.
The idea was first introduced a month ago, the week that the banking-sector to broader stock-market ratio (BKX-SPX) broke out to the upside and long-term Treasury bond yields broke up from bottoming patterns.
In the ensuing 5 weeks the macro fundamentals and technicals have only become firmer in support of T2C.
At its most basic level, I think that a potential carry trade by the banking sector using the Fed's Zero Interest Rate Policy (ZIRP) on the shortest end (Fed Funds) and a rebelling Treasury bond market throughout the rest of the curve – where banks do their lending – represents a logical extension of the ZIRP and QE (money creation) that have been promoted thus far. Think of ZIRP/QE as the thrust and a yield 'carry' by the banks as an afterburner, which finally incentivizes the banks to get the money 'out there' into the public's hands.
This would theoretically relieve the velocity of money problem that has plagued the economy since the great bull market in stocks and an era of 'real' economic growth (i.e. not inflation-fueled) ended in the run up to the recession of 2001. 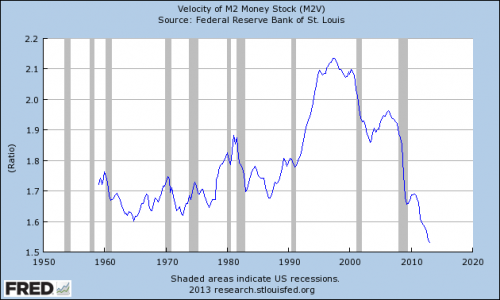 Per the St. Louis Fed:

"Velocity is a ratio of nominal GDP to a measure of the money supply. It can be thought of as the rate of turnover in the money supply – that is, the number of times one dollar is used to purchase final goods and services included in GDP."

This is of course the graph that deflationists point to when they argue that there is no inflation, because newly printed money is not getting out into the economy and driving up prices. This is a price tail wagging the money creation dog, but that is an argument for another day.
What I want to do is show how the Fed can leverage events beyond its control – rising T-bond yields, which most people view as an economic negative – and try to turn chicken shit into chicken salad, to paraphrase the eminently quotable LBJ.
In an over-managed, as opposed to semi-organic, economy there must always be a tool to be used, or a lever to be pulled and the rebellion in T bonds (rising yields) when combined with ZIRP on the only part of the curve that the Fed has dominion over appears to be a heaping helping of chicken salad, served up nice and fresh.
In fact, it can be argued that ZIRP has been the most important tool in the Fed's toolbox since its inception. Quantitative Easing (aka QE, meaning Treasury and MBS bond monetization) was fated to failure, as the rising tide of global bond revulsion (rising yields) toward all classes has overwhelmed the Fed's operation. Yet there has been ZIRP, silently whirring along for years now, feeding the front end of a potential carry trade, seemingly in wait for the bond vigilantes to ride into town and complete the setup by driving up bond yields out along the curve.
We should realize that the US Fed's good fortune is probably tied to China's ill fortune. As China decelerates, a downward pressure is exerted upon the global economy and the inflationary plays of the last decade – notably commodities – remain under pressure. This has given the Fed free license to hold ZIRP, to the public's approval.
Do not think for one moment they would be able to inflate against a backdrop of impulsively rising prices. Remember our 'mobs with pitchforks' theme into spring of 2011? Ben Bernanke was a buffoon back then as opposed to a...no the "Hero" now.
Paul Krugman bull horned ZIRP in December, 2008,  and it has been with us ever since. It was born of a systemic near death experience, which was...Beuller? Anyone? A tool. Yes, the great financial crisis of 2008 was a lever that was used to justify extreme monetary policy. It has since been taken for granted as an embedded component of the system itself.
Now comes the phase where the T-bond market gets away from the Fed (as they pretend to have a decision to make about tapering) and gets a little wild. This creates the spread in yields. Yet by definition, a rebelling bond market is usually a sign of inflation. But again, our heroes at the Fed may be able to leverage global deflationary pressure and serve up the chicken salad. 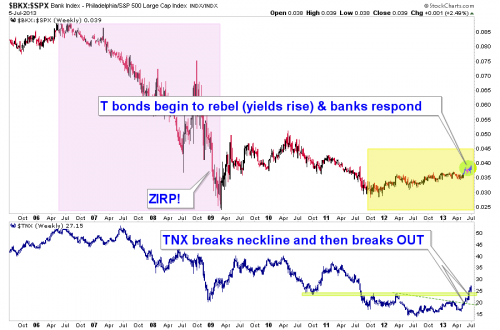 The chart above shows a compelling picture of the 'Banks to S&P 500' ratio in positive correlation with the yield on the 10-year Treasury bond. The moment I saw the TNX and TYX banking-stock indices begin to break above the neckline, and then saw the BKX-SPX ratio make a breakout of its own, I was on alert – new buzz phrase and all – for 'Taper to Carry' (T2C).
If there is to be a measure of success with T2C, the implication is that inflationary issues would follow. That is the traditional message of rising Treasury yields after all. A long-term chart of the BKX-SPX ratio reveals that the initial thrust of Greenspan's Age of Inflation-on-Demand in 2000-2003 saw the banks strongly leading.
As we know, the banks led the stock market into the crash of 2008. The rest – meaning ZIRP and all sorts of other 'hands on' policy making – are not only history, but current fact. FrankenMarket lives on.
We can eventually expect either inflated chickens coming home to roost with rising prices or the salad turning back into excrement as the operation fails like the Greenspan era version did last decade when it resolved into an epic financial market liquidation. In other words, a bond carry trade (born of interest-rate manipulation) could ultimately create more economic distortions, despite short-term benefits. T2C Bullet Points:
This segment started out with the intention of being simple, "nothing fancy". But as often happens it got wordy, a little complicated and that is just how we'll have to roll. I do not seem to have the ability to boil complex things down to easy to digest nuggets. It's chicken salad after all, not Chicken McNuggets. We continue to refine and clarify the message as events unfold.