END_OF_DOCUMENT_TOKEN_TO_BE_REPLACED

The Swiss Franc lost its gold-backing 12 years ago. The price of gold in Francs has since soared...

The SWISS FRANC is counted among the top 5 reserve currencies in the world, writes Gary Dorsch of Global Money Trends, alongside the US Dollar, the Euro, the British Pound, and the Japanese Yen.

The Swiss Franc holds this top distinction, even though the Swiss economy does not find its place among the top five economies of the world. Instead, its annual output of $488 billion of goods and services ranks as the world's 22nd largest.

So when the Swiss Franc nearly reached parity with the US Dollar this week, it raised many eyebrows, since it's a remarkable achievement, considering the fact that Switzerland's economy is only 1/25th the size of the US economy.

However, rather than speaking volumes about the intrinsic worth of the Swiss Franc, its climb towards $1.00 is signaling that the world can no longer rely, as it has done since the end of the Gold Standard, on a currency issued by a single country for central-bank forex reserves.

At present, roughly 62% of the $7.3 trillion of currency reserves held by central banks and sovereign wealth funds are held in US Dollars and 25% in Euros. But World Bank chief Robert Zoellick warned in late September:

"The United States would be mistaken to take for granted the Dollar's place as the world's predominant reserve currency. Looking forward there will be increasingly other options to the Dollar."

To that end, the SDR basket of currencies might be modified to include the Chinese Yuan, the Indian Rupee, and Brazilian Real as well.

The Swissie's surge from around 94 US cents in late August, towards parity with the US Dollar in October, began shortly after US president Barack Obama nominated Ben "Bubbles" Bernanke to a second term as head of the Federal Reserve. Soon after, a British newspaper revealed that finance ministers and central bankers from the Arab oil kingdoms, China, Russia, Japan, and France had held a series of secret meetings to plan an end to the use of the US Dollar for oil trading by 2018.

Under the apparent scheme, reported by The Independent newspaper, the US Dollar would be replaced with a basket of currencies, including the Euro, the Japanese Yen, the Chinese Yuan, and Gold Bullion. If correct, such a move would be an economic bombshell.

An end to the US Dollar as a medium of exchange for trading in a vital commodity such as crude oil would deal a powerful blow to the greenback's pivotal role as the world's reserve currency. 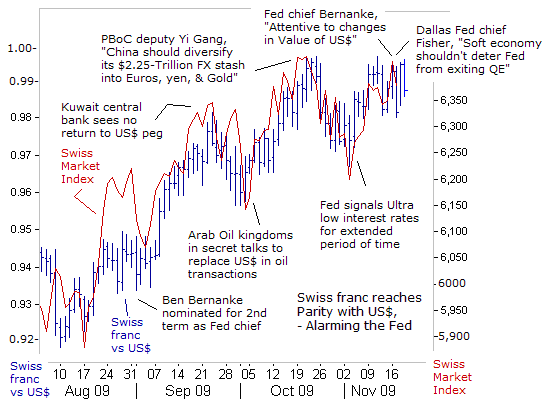 The Swiss National Bank (SNB) usually keeps a tight rein on the Swiss M3 money supply, limiting its growth rate to a 3% annual clip and thus bolstering the Franc's appeal to offshore investors.

Because of Switzerland's lack of natural resources, it has created an economy that is heavily dependent on a steady tide of foreign capital inflows for its banking services, wealth management, and global trade.

But the SNB was suddenly forced to loosen its tight-rein on M3 when the US Fed began slashing the Fed Funds rate towards zero-percent and shifted to nuclear "Quantitative Easing" (QE).

The SNB responded by slashing its 3-month interest-rate target by 250 basis points to 0.25%, and said it would engage in its own variant offshoot of QE – this time printing unlimited amounts of Swiss Francs and selling them on the forex market to weaken its currency against the Euro, and to widen the profit margins of its exporters.

Most telling, every piece of paper that can be electronically printed by central bankers is losing ground to the king of currencies – Gold Bullion, now hovering above $1100 an ounce. 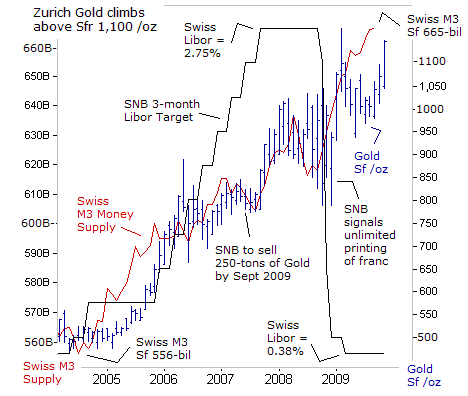 In earlier decades, the Swiss Franc displayed an 80% correlation with Gold Prices, because the Swiss constitution called for the Franc to be backed by 40% with gold reserves.

This link was broken however, when a panel of government experts delivered a report in October 1997 finding that 1,300 tonnes of gold "were no longer necessary for monetary purposes and could therefore be withdrawn from the Swiss National Bank's (SNB) balance sheet and used for other purposes."

Over a five-year period ending in March 2005, the SNB sold nearly 1,300 tonnes of its gold at an average selling price of $351.40 an ounce. That raked in CHF 21.1 billion. Thus, these controversial sales turned the Swiss Franc into a "relic of the gold standard." In June 2007, the SNB shocked the markets again, by saying it would sell another tranche of 250 tonnes of gold through September 2009, and use the proceeds to increase its foreign exchange reserves.

The SNB's decision to dump more than half of its gold holdings was in retrospect, one of the greatest blunders in financial market history. It probably ranks alongside the British Treasury's determination to sell 400 tonnes of the United Kingdom's gold in a series of 17 auctions between 1999 and 2002, when the price was at a 20-year low.

More than half of the UK's gold reserves were sold at an average price of $275 an ounce – a blunder costing the BoE about £7 billion at today's prices.

Despite the SNB's massive sales of gold, the yellow metal continued to climb on an upward trajectory, hitting CHF 1,150 an ounce, an all-time high. Gold's value in relation to the Swiss Franc has more than doubled since March 2005, when the SNB completed its first round of gold sales. The SNB's vow to print unlimited amounts of Francs in January, and threats to buy other currencies at a fixed rate, only helped fuel gold's rally from CHF 800 to the ounce. 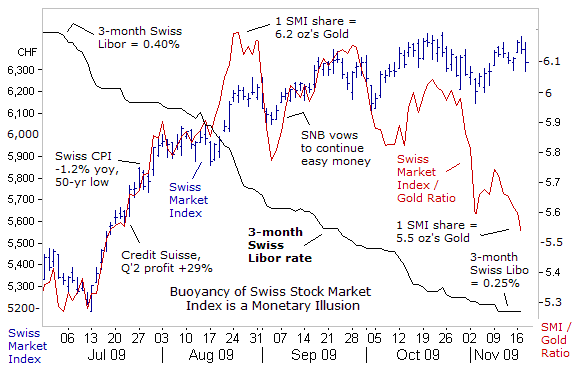 SNB chief Jean Pierre Roth, a 30-year veteran of the Swiss National Bank, announced his intention to retire in December. Sometimes, central bankers will issue a mea-culpa, or a confession about their inner thoughts, before leaving the world stage. It's a break from tradition for central bankers to speak candidly about key issues, after they've operated behind a veil of "smoke and mirrors" throughout their careers.

But when asked on November 12th if he believed the G-20 central banks would be inclined to lift their interest rates to calm stock market exuberance – and pre-empt the emergence of dangerous bubbles – Roth told the Swiss newspaper Le Temps:

"If the bourse is euphoric, do we have to raise interest rates? I do not believe that, right now there is, within the G-20 central banking circles, the belief that interest rates should be an instrument to use to limit euphoria."

With Swiss consumer prices falling at the fastest rate in 50 years this July, the SNB issued a stark reminder that it's determined to fight deflation risks by printing Swiss Francs.

In the process, it pumped-up the Swiss Market Index (SMI) to the 6,400 level, creating the illusion of an economic recovery. However, when measured versus Gold Prices in Swiss Francs, the SMI has actually tumbled by 11% since its peak on August 20th.

In hard money terms, the SMI is trading at 5.5 ounces of gold, the level which prevailed in mid-July, when the SMI was last seen in the vicinity of the 5,600-area.