END_OF_DOCUMENT_TOKEN_TO_BE_REPLACED

Could this prove the final shake-out for gold and silver prices...?
WHILE turmoil in global capital markets may ultimately benefit the precious metals sector, it certainly is not an immediate catalyst, writes Jordan Roy-Byrne at TheDailyGold.
As global markets weakened last week so too did precious metals and precious metals companies. The gold miners are nearing recent lows ahead of conventional markets while the recoveries in gold and silver appear to be reversing. This could be the start of a final flush that marks the end of the bear market.
As the last week of summer (unofficially) comes to a close, the near term prognosis in the miners could not be more clear. The weekly candle chart for GDXJ and GDX is below. Both are set to close the week near or at the summer lows. 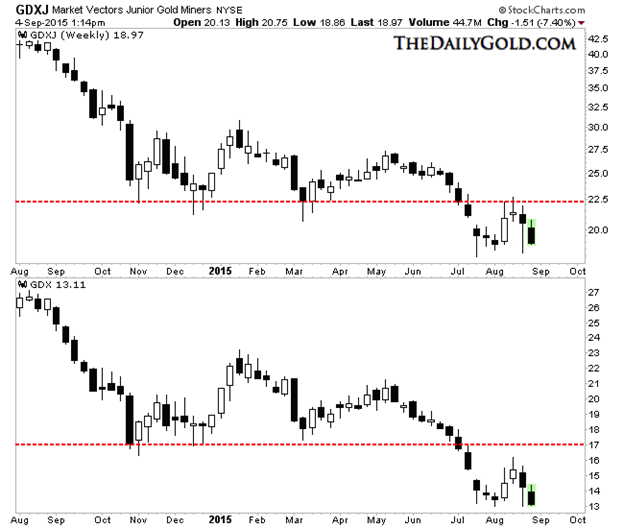 Note the difference between the past few months and last winter. As the miners carved out a bottom last winter they formed strong white candles during up weeks. They held their gains and closed near the highs. That established support which held for seven months.
Recent action is a strong contrast. The reversal candles in July were only mild in strength. In addition, although the miners gained in August, they failed to close near the highs of the week. That is a sign of distribution. Also, the reversal last week was temporary as miners are going to close this week near their lows. Finally, note how GDX was so weak that its rebound failed to touch $17.
The miners usually lead the metals and so their weakness could be hinting that gold has a leg down to $1000/oz before the bear market concludes. Gold is set to close the week near $1120 after failing at $1140 on Tuesday and Wednesday. The last key weekly support for gold is around $1080. Meanwhile, silver may have begun a reversal today as it could close below the closes of the past three or four days. It is tough to find anything bullish for the metals, at least in the near term.
However, the one positive, as we noted last week is gold is firming in real terms. Specifically gold is gaining some strength against global equity markets. Gold relative to emerging markets has already broken out but next it must break the downtrend against global equities. Below we plot gold against the all country index ETF. The ratio closed at a 6-month high a few weeks ago and is very close to retesting a confluence of resistance.

Good things are happening under the surface for gold and the precious metals complex but that does not negate the near term downside potential. The miners are acting very poorly and appear headed to new lows. The metals are reversing their rebound and are also at risk for new lows in the days and weeks ahead.
Gold traders and investors need to be careful and position their portfolios to take advantage of the coming bottom. We won't be getting long until gold nears $1000 per ounce and the junior miners become extremely oversold again.