END_OF_DOCUMENT_TOKEN_TO_BE_REPLACED

The Emperor is now naked for all to see, and the run in Gold Prices has just gotten started...

BEN BERNANKE told the US Congress last week that "he would support raising the limit on the size of the individual home-loans eligible for securitization by the government-sponsored mortgage finance entities from $417,000 to $1 millionon a temporary basis," reports the Financial Times.

He also suggested that Fannie and Freddie could "pay insurance premiums on these loans to the federal government, which would 'act as guarantor' by taking on some of the credit risk.

"Charles Schumer, the Democratic chairman of the Joint Economic Committee, enthusiastically welcomed the idea and said he would try to insert it into legislation already before Congress. It came as Mr Bernanke told Congress that estimates that set the total losses from subprime mortgages at about $150bn were probably 'in the ballpark'."

Given that the Fed and European Central Bank have already injected well over $150 billion into the money markets since August, Bernanke obviously lied about his ballpark figure. But just how big is this subprime mess?

To measure subprime losses, we would first have to find out the size of the total subprime market. US Fed data pegs the total US residential housing stock at $20 trillion, and the US residential mortgage market is worth $10 trillion on its estimates. This number is substantial, as it eclipses the US Treasury bond market of US $9 trillion.

Of the $10 trillion mortgage market, Government Sponsored Enterprises (GSEs) such as Fannie and Freddie hold about $1.5 trillion, leaving $8.5 trillion in private hands. Within that $8.5 trillion, we then have various grades and categories...with credit ratings ranging from AAA to BBB, and categories such as the traditional 30-year fixed right through to ARM with teaser rate, interest only, and negative-amortization.

The exact definition of "subprime" itself is not clear, with various sources estimating that the total subprime portfolio of the US is between $1.5 trillion to $3 trillion. To precisely break this category out of the total $8.5 trillion is difficult, but nonetheless, we value the subprime market at $2 trillion. (This is in line with an estimate by MSNBC analysis and research firm First American Loan Performance.) 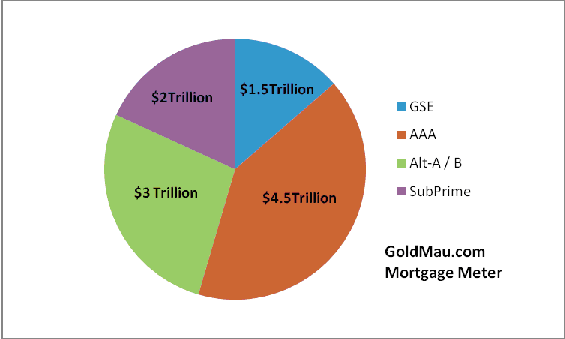 So just how much of the $2 trillion subprime position is now lost? Various sources including First American Loan Performance estimate a default rate of 15%. This would translate to $300 billion of non-collectable principal and interest.

That in itself is no big deal, as every year the United States spends well over $100 billion in Iraq and $400 billion in military separately. The real concern is how such defaults are affecting the value of the existing outstanding subprime portfolio.

In other words, would you eat beef knowing that one-in-ten cows has madcow disease?

Let's follow the ABX index published by Markit.com, which is the basket of derivatives linked to subprime securities. As financial tools go, this index is far from perfect, since it is barely two years old, and tends to be thinly traded.

But right now it has the unfortunate distinction of being the only tool easily available to measure sentiment in the opaque subprime securities world. And in the past couple of weeks, the message emerging from this measure has started to look utterly dire, as it shows subprime mortgages are changing hands at 25 cents on the dollar. 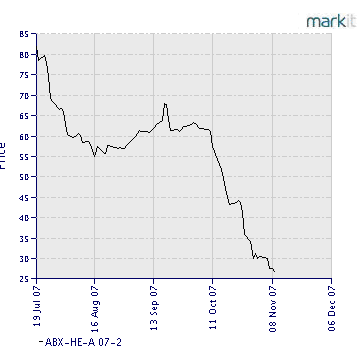 As we have shown in the pie, this 80% haircut would apply to potentially $2 trillion worth of mortgage-bonds if investors in those mortgages were to exit today. The loss is not $150 billion, but more like $1.6 trillion.

What’s more, the ABX shows that since September 2007, the value of AAA-rated mortgage bonds – the very best standard awarded, remember – has begun to crater, and now trades at a stunning 70 cents on the dollar. This means that if all AAA and Alt-A mortgage portfolios were to be marked to market, the loss would amount to another $2 trillion. 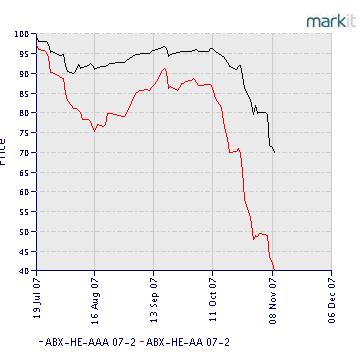 Despite the fact that Ben Bernanke and the US Fed moved to a neutral balance of risks assessment last week, the market now sees a roughly 55% chance that the central bank will cut rates by another 50 basis points by the close of its January policy meeting, and an additional 15% chance that it will cut by 25 points by then.

And now you understand why Ben Bernanke was so frantic in lowering US interest rates and proposing the drastic policy measure of tripling the GSE limit to $1 million. In essence he is trying to increase the share of GSE in the pie above, and he hopes the problem will go away.

The curious mind asks: Who holds those trillions worth of mortgages?

Thanks to the genius of the American banking and marketing machine, comes the answer, just about every sizable institution underneath the sun with a fixed income portfolio.

From Europeans to Asians, from banks to brokerages, from hedge funds to pension funds, institution to retail, trusts to endowments. So allow me again to quote the FT.com article of Nov 1st.

"The experience of living through the Enron scandals earlier this decade means that the audit industry is now terrified that it could face lawsuits if it is perceived to be too lax towards its clients. So some now appear to be demanding that their banking clients reprice their mortgage assets according to the only visible market tool – namely the ABX."

It is thus little wonder that some banks have suddenly been forced to increase their writedowns in recent weeks. Indeed, I would wager that the pernicious combination of ABX and the 'Enron factor' is a key reason for the recent shocks emanating from Merrill Lynch.

However, the rub is that while auditors at some Wall Street banks are becoming quasi-evangelical about the need to reprice subprime assets, there are still other, vast swathes of the financial system which have not been touched by the full blast of transparency yet. Moreover, many financiers outside the world of Wall Street banks remain very wary of rewriting their mortgage assets to current ABX price levels, due to a lingering hope that the recent ABX slump will remain temporary.

Most of those aforementioned outfits are in a state of shock and have been reluctant to mark their trillion-plus subprime portfolio to market. Every other day there is new revelation of substantial subprime loss. First it was New Century in March, then American Mortgage and Countrywide in September, then it got worse as Wells Fargo, Bank of America, Credit Suisse First Boston, Citibank (albeit with a new CEO now) came out of woodworks.

Last Friday it was Wachovia (US 4th largest), and on Tuesday it was E*trade. Not one major bank dealing with mortgages was immune. If there is such thing as systematic risk, we are sure looking at one, and therefore expect a lot more skeletons to come out of the closet in the months to come.

How about interest rates? Hiking interest rates on US debts is like giving a discount on madcow beef. It's not going to make a difference or help sell these bonds.

At this juncture, the Fed has no choice but to redeem any and all mortgages at near face value directly, through GSE, or through offshore vehicles. The more the Fed redeems, the more dollars they print. When you print $1 trillion a year, people can reasonably swallow the extra money supply, but when you print a $1 trillion in a hurry and in a conspicuous way, you are directly challenging money managers’ intelligence and you will see a squeeze in Gold Prices. It’s that simple.

No sane foreign institution is going to finance American home owners, and why should they when they can finance the Brazilians, Canadians, Thais, Russians, Chinese, Indians, with an appreciating currency? The Dollar's reserve status is now shattered.

Mind you, it’s not that we are against the Dollar in particular; we just don’t think any fiat currency deserves to be the world’s reserve currency.

To those who say the Gold Market is due for a prolonged correction at $800, they are missing the big picture. To us, the run in Gold Prices has just gotten started. The Emperor is now naked for all to see.