END_OF_DOCUMENT_TOKEN_TO_BE_REPLACED

The 'in' trade right now seems to be to ride the stock market...

THE S&P 500 closed up for the week on Friday in US trading, notes Daily Reckoning Australia editor Dan Denning.

That's seven consecutive higher weeks for the index. It hasn't begun the year in such stupendous fashion since 1967. The longest weekly winning streak, by the way, is 1957, where the index closed higher for a lucky thirteen weeks in a row.

Hmm...1957. That was one year after Warren Buffet formed his first investment partnership, and two years before he met his long-time co-conspirator Charlie Munger. We'll come back to the dynamic duo in a moment. When you're comparing stocks to other assets (like gold) you have to include Charlie and Warren.

The one hope investors have is to buy shares of a productive business that can grow your money faster than the authorities can debase it. That is what 'civilized' people do, if you'll recall the wisdom of Charlie Munger from last year. We thought of Munger this morning when we saw that the S&P had closed higher for seven weeks in a row.

In particular, it seemed like a good time to go back and visit the ratio between the spot gold price and the 'B' shares of Berkshire Hathaway, the company Munger directs along with his pal Warren Buffett. How is Berkshire doing relative to gold? Have a look below. 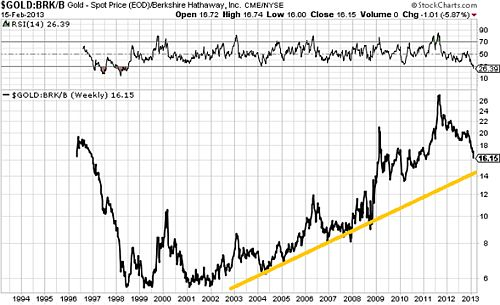 The chart shows you how many 'B' shares it would take you to buy an ounce of gold. The lower the ratio, the better the 'B' shares are doing or the worse the gold price is doing. You can see that when the gold price peaked in 2011 above $1900, so did the ratio. Since then, it appears to be in decline.

What the chart doesn't show you is that Berkshire's 'B' shares closed at their all-time high on Friday at $99.77. The gold price, meanwhile, closed at a six-month low and briefly dipped under $1600. Yet despite all that, the price action in gold, at least in terms of Berkshire 'B' shares, has favored gold since 2002.

Of course what we're really trying to discern is whether stocks will keep going as a result of monetary inflation. We'll cut to the chase and make a prediction: a combination of falling gold prices and rising stock prices will drive the ratio down to 14. But let's assume the worst.

Either way, if the ratio finds support at 14, then it would cost you 14 shares of Berkshire B to buy an ounce of gold. At around $100 US per share, you're looking at gold declining to US$1400. Now your editor is still a committed gold bull. So how can it be 'about right' that we're expecting (and hoping) for the gold price to decline to $1400?

The gold price has bounced in a range between $1600 and $1800 since August of 2011. That's a long time to consolidate before making its next move. It hasn't made its next move, though. In fact it's been chugging along sideways for so long that some gold speculators are now selling.

For example, George Soros cuts his exposure to gold ETFs in the fourth quarter of last year, according to Mineweb. The same article reports that Louis Bacon Moore's fund completely liquidated its gold ETF position. At least two billionaire trader/speculators are cutting back on gold. Should you be worried?

On the contrary. You should be grateful. You'll now have the chance to add to your gold position at lower prices, or build a brand new position if you don't already have one. The climate of uncertainty and nervousness about long-term gold prices tells us exactly where we're at in this bull market: the conviction of the bulls is being tested and the weak hands are folding.

Now, we're not calling George Soros a weak hand. We don't want to get a letter from his lawyer. What we're saying is that traders wouldn't want to lose 12.5% in a couple of months. Selling out now and buying back later at a cheaper price is a much better idea. But that's all a matter of tactics. The strategy – buying precious metals as a hedge against monetary inflation – is still firmly in place.

You'll have to be comfortable looking ridiculous and feeling wrong if you adopt this strategy, though. Stocks are making hay. US markets were closed Monday for Presidents Day. But the Nikkei rocketed up over 2% in Tokyo. Japan managed to escape the G-20 meeting with its policy of strength through devaluation firmly intact.

The trade right now, then, is to buy stocks in anticipation of more global currency devaluation. How long can that trade run? The easy answer is, 'Longer than you think.' But the real answer may have something to do with the chart below. 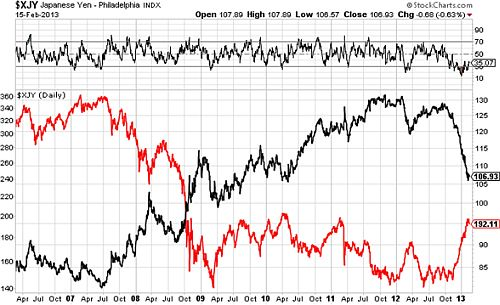 The black line shows the Japanese Yen advancing against the US Dollar from the onset of the world financial apocalypse. You can see that since October, the new aggressive monetary stance of the Japanese government has talked the Yen down about 30%. Powerful words. Just wait until the deeds begin!

In the meantime, the red line shows what Japanese stocks think of the shock monetary therapy. They like it. Or, investors are so fearful of deliberate inflation targeting that they've decided to get out of savings accounts and bonds and into something with the firepower to beat inflation. The Nikkei is the big winner so far.

To be fair, the Japanese are following the Bernanke playbook. Create a diversionary bubble in stocks in order to make people feel rich and spend more. At the very least, it makes your banker friends richer and happier. And who knows, it might even work!

You'll note that the Yen is still a lot stronger against the US Dollar than it was at the start of the global financial apocalypse. Is it possible for the Yen to decline to pre-crisis levels? And if so, would stocks get a mighty tailwind higher? And not just Japanese stocks but Australian and American stocks to?

Well, on a short-term basis – this week – the RSI on the Yen is reading oversold. That means it could gather itself, take a few deep breaths, and THEN head lower. But lower seems to be the trend, and it's a dominant trend right now.

Of course the answer to all of the questions above is that nobody knows anything. Soros is guessing like the rest us. And we are all guessing, or making our plans, in line with our own preconceived ideas about what IS happening and what SHOULD happen. Where does that leave you?

When in cognitive doubt, and when no data can prove a conclusion, we prefer to go with Fingerspizengefuhl. It's a German word that literally translates into 'finger tips feeling'. We first encountered the term when reading about military history and why some commanders are better on the battlefield than others. They are simply more intuitive when the situation is fluid.

Intuition may seem like it's out of place in games of strategy. For example, we once experimented with what we called an intuitive form of chess a few years back. Rather than employing set strategies, we decided to play impulsively and intuitively. The results were mixed but mostly bad.

You can surprise an orthodox opponent by playing in an unorthodox and unpredictable manner. Traditional defenses don't work against a player who is not attacking in any organized manner. But once your opponent realizes this, he's likely to pick you apart ruthlessly. Playing intuitive chess opens up some serious breaches in your defense, even if you play a few elegant and pleasing moves before getting creamed.

The share market is not a chess game, though. Real money is at stake. Does intuition have any place in it? Wouldn't it be better to stick with concrete valuations, or investing first principles like 'buy low' and 'sell high'?

Well, in a way, we are mixing intuition with principle. On principle, you can understand that competitive currency devaluation tactics may help a country win an export battle for a quarter or two. But it's not a tactic that can win a war. Fiat money is the only guaranteed loser in this war, and we reckon gold is the likeliest winner, although not the only one.

And, by the way, since when is economic growth a zero-sum game of warfare? The fact that the dominate media narrative is now about 'the currency war' shows you just how grim the prospects for growth are around the world. Europe is in recession. Japan is on its demographic death bed. And the US is turning both European and Japanese at the same time.

Intuitively, investors know that the facts don't add up to a bull market. But you have to do something with your money. And right now, that something appears to be 'buy stocks'. Our intuitive conclusion is that investors will buy stocks for a bit longer, sell gold for a bit longer, and then the market will experience another 'come to Jesus' moment.

Thinking of buying gold? Open an account with BullionVault today and get access to the lowest possible prices...