END_OF_DOCUMENT_TOKEN_TO_BE_REPLACED

Isn't it marvellous! Stocks are rising as gold prices fall. Who needs insurance...?
A SIGNAL from technical analysis is favoring US stocks over gold on the big picture, writes Gary Tanashian in his Notes from the Rabbit Hole.
Measuring the S&P500 index in gold prices, we first began managing this as the bottoming pattern broke above its neckline and then the 10-month moving average crossed above the 20-month for the first time since 2001. 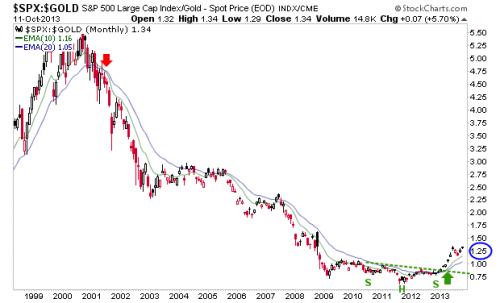 Hence the question...
Is monetary insurance needed?
Put another way, would it make monetary insurance (gold) any less important if a new positive economic era has been created? In my opinion no, because as a rational market viewer I see the mechanics of any new bull era and deduce that its arrival would simply be another step further into Wonderland. Our newsletter is named after that fantastic story and the website's ultimate theme is to deal with what is, no matter how fantastic it may seem.
As we've often noted recently, the S&P500 is rising as one with corporate profits (that's good) and with money supply (that's the Wonderland aspect of what we are being asked to believe).
For decades the S&P 500 ambled higher as it was closely aligned with corporate profits. In the early 70's the last tie of the US Dollar to gold was cut. After the resulting 1970's inflation problem policy makers got the hang of controlling the new fiat animal that had been created. Interest rate increases were the key and inflation was beaten.
From that sprung a secular bull market in stocks, which became unhealthy in the mid 90's as a bubble began to form and stocks lost all correlation to their own profits, let alone money supply growth.
The next bull phase saw corporate profits and the S&P 500 rise together as 'official' money supply pumping was made unnecessary by the commercial credit bubble that grew out of Alan Greenspan's inflationary actions at the turn of the century.
With the bubble in commercial credit resolved by the 2008 liquidation, the only source left to pump the markets was the official source, and the Fed has not disappointed as Ben Bernanke has backed his 2002 words "why deflation will not happen here" with action above and beyond as hands-on policy making took a left off Main Street and went right down the Rabbit Hole.
Officially sponsored inflation, corporate profits and the stock market are tied together on this journey to where ever we are going. If you see risk in the above picture, you might be glad to have insurance. If not, then party on Garth.
So speaking personally, it is a big picture technical signal vs. what I see and think I know to be true. The choice is easy; carry insurance. Beyond that, another choice is not to stand in a casino and fight the house with speculative funds until the time is right.
Conclusion? The technical analysis signal (SPX-Gold) for a new era of stocks over gold is a reality. Another reality (from my perspective) is a long-term personal view of value and a need not to get caught up in suspected falsehoods. So NFTRH will move forward with perspective and balance, regardless of how things shake out for an honest money tool (gold) vs. policy making and the markets and economy that depend upon policy making.
So no matter how things resolve in the near term (gold is technically vulnerable), NFTRH will proceed with the idea that a castle built on a sinkhole is to be rented (traded), not owned outright (invested in). If gold fails to protect people in a casino of prices that reflect confidence in monetary leaders, then all that is left is its value for non-casino patrons. Price is something else all together as NFTRH has belabored from day 1.
On the other hand, if the castle should fall into a sinkhole that technical analysis did not see coming, the price, but more importantly, the value assigned to gold by newly panicked casino patrons could come roaring back. That thought makes holding insurance all the more attractive.
The difference between value and price makes all the difference between a grounded player and a casino patron. The above was written by someone who views gold's near term price as still being vulnerable and yet whose view of its value remains steady because it is best not to have to activate your insurance policy in the first place. In other words, if policy makers have found a magical economic elixir, so be it. If they have not, so be it.