END_OF_DOCUMENT_TOKEN_TO_BE_REPLACED

Remember when the US Fed just trimmed or raised interest rates...?

IT ALL seems so surreal, writes Gary Dorsch, editor of the Global Money Trends newsletter.

Mesmerized by the Fed's hallucinogenic "Quantitative Easing" (QE) drug, then seduced by the Fed's Zero Interest Rate Policy (ZIRP), and then rescued by the Fed's clandestine intervention in the stock index futures market, for the past four and half years it's become easy to forget that there was once a time when the Fed's main policy tool was simply adjusting the federal funds rate.

It's even harder to recall that two decades ago, the Fed's raison d'être was combating inflation, whereas today, the Fed's main mission is rigging the stock market, and inflating the fortunes of the wealthiest 10% of Americans.

"The central bank's purpose is to get ahead of the inflation curve," declared Wayne Angell, one of the seven governors of the Federal Reserve on 1 June 1993. Angell had a reputation as a Fed hawk, and he was pushing for a tighter monetary policy, even before an uptick in the inflation rate showed-up in the government's statistics.

"If we're ahead of the curve, our credibility and the value of our money is maintained. Some of my economist friends tell me, 'We don't feel much inflation out there, but we feel better knowing that you're worried about it.'"

Thus, there was a time when savers received a positive rate of return on their money.

Two decades ago, the Greenspan Fed was stacked with hawkish money men. And because their tenures lasted for 14 years, they felt immune to the winds of politics. Thus, if the Fed governors were to make unpopular decisions to hike interest rates, in order to bring inflation under control, or burst asset bubbles, so be it.

Of course, it's much different today. The Fed is stacked with addicted money printers that are beholden to the demands of their political masters at the Treasury and the White House. How did Fed policy swing so radically from Angell's day – when Fed tightening meant lifting the federal funds rate and draining excess liquidity – to today's markets, where a small reduction in the size of the Fed's massive QE injections is considered to be a tighter money policy?

The Treasury Bond Vigilantes is a nickname that was used to refer to a legendary band of renegade bond traders, who used to fire-off warning shots to Washington by aggressively selling T-bonds in order to protest any monetary or fiscal policies they considered inflationary. The jargon refers to the bond market's ability to serve as a brake on reckless government spending and borrowing. The last major sighting of the bond vigilantes was in Europe, as they wreaked havoc upon the debt markets of Greece, Ireland, Italy, Portugal, and Spain.

James Carville, a former political adviser to President Clinton famously remarked at the time that:

However, the so-called T-bond vigilantes appear to have been dead and buried over the past few years. The US Treasury was able to borrow trillions of Dollars, largely financed by the Fed at the lowest interest rates in history. Keeping the T-bond vigilantes on ice is a key linchpin of the Fed's Ponzi scheme, used to inflate the value of the US stock market and keep it perched in the stratosphere.

Last month however, May 2013, something very strange began to happen. It looked as though the long dormant T-bond vigilantes were suddenly beginning to awaken from their slumber. Indeed, the long-end of the US Treasury bond market suffered its worst monthly decline in two and a half years, as yields jumped to their highest levels in 13 months.

Ticker symbol TLT.N, the iShares Barclays 20+ Year Treasury Bond fund, lost 7% of its market value. It looked as though Wall Street's bond dealers were whittling down their holdings of T-bonds, acting upon insider information from the New York Fed that the biggest buyer in the T-bond market could soon reduce the size of its monthly purchases and thereby cause T-bond prices to fall.

Interestingly enough, T-bond yields jumped half-a-per cent (50 basis points) higher even though US government apparatchiks said inflation was only slightly higher than a year ago.

During Greenspan's tenure, the Fed would try to push T-bond yields higher by lifting the overnight federal funds rate. But in today's hallucinogenic world of QE, near zero short-term T-bill rates, and historically low bond yields, if the Fed begins to reduce the monthly size of its T-bond purchases in the months ahead it could have the same effect as a quasi-tightening. That's because the Fed has so badly distorted and inflated market prices over the last few years.

If the heavy hand of the Fed is gradually withdrawn from the marketplace, the big question is: what would it mean for the $21 trillion US equity market? 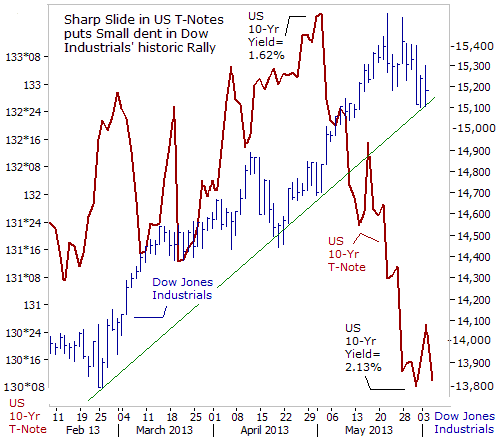 The Bernanke Fed is coming under increasing criticism. On May 29, the 85-year old icon of central banking – the greatest warrior against inflation in US history – former Fed chief Paul Volcker waded into the debate over when the Fed should start unwinding its radical QE operation, arguing that the "benefits of bond-buying are limited and is like pushing on a string."

Volcker launched a scathing critique of the Bernanke Fed, inferring the central bank had become a serial bubble blower.

"The Fed is effectively acting as the world's largest financial inter-mediator. The risks of encouraging speculative distortions and the inflationary potential of the current approach plainly deserve attention."

Volcker reminded the new breed of Fed lackeys that the central bank's basic responsibility is to maintain a "stable currency", and that it should unwind its reckless scheme of massively increasing the US-money supply and blowing bubbles in the stock market.

"Credibility is an enormous asset. Once earned, it must not be frittered away by yielding to the notion that a little inflation right now is a good a thing, a good thing to release animal spirits and to pep up investment. The implicit assumption behind that siren call must be that the inflation rate can be manipulated to reach economic objectives. Up today, maybe a little more tomorrow and then pulled back on command. Good luck in that. All experience demonstrates that inflation, when fairly and deliberately started, is hard to control and reverse."

Last week, the Treasury's 10-year yield climbed above the 2% level following Volcker's remarks. The 85-year old Fed hawk still commands a lot of respect on Wall Street and his voice is not easy for the Fed's rookies to tune out. The recent plunge in T-bond prices did trigger a knee-jerk sell-off in the stock market, that briefly knocked the Dow Industrials lower to the 15,100-level.

But in a June 3rd note, Goldman Sachs (GS) released a message to the financial media, telling investors to remain calm amid the bond market sell-off. GS reiterated its bullish stance on the US stock market, saying further gains lie ahead, and that S&P 500 companies have plenty of cash on hand which can be deployed to offset the negative effect of higher interest rates by increasing their dividends 11% this year and 10% in 2014. 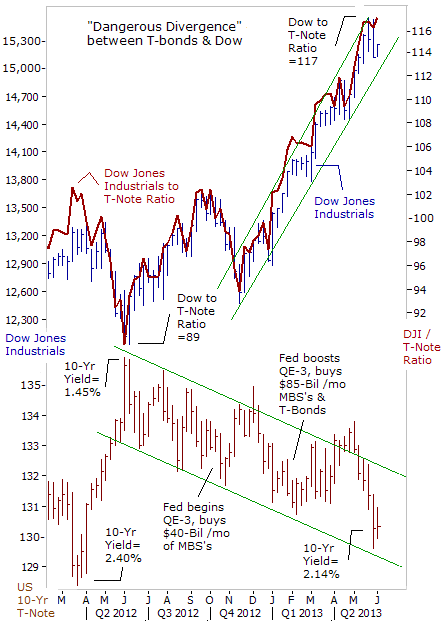 Still, yields on 10-year T-bonds increased by a half-a-per-cent in the month of May, including a jump of 16 basis points on May 28th, seen as a signal that the Fed would scale back its QE injections.

"A slowing in the pace of purchases could be viewed as applying less pressure to the gas pedal, rather than stepping on the brake," said Kansas City Fed chief Esther George on June 4th.

"It would importantly begin to lay the groundwork for a period when markets can prepare to function in a way that is far less dependent on central bank actions and allow them to resume their most essential roles of price discovery and resource allocation. I support slowing the pace of asset purchases as an appropriate next step for monetary policy. Waiting too long to prepare markets for more-normal policy settings carries no less risk than tightening too soon."

The Kansas City Fed chief cited signs of overheating markets, including margin loans at broker-dealers at a record $384 billion in April. "We cannot live in fear," added Dallas Fed chief, Richard Fisher on June 4th, "that gee whiz the stock market is going to be unhappy that we are not giving them more monetary cocaine."

Still, many traders don't believe that the Bernanke Fed could ever kick the QE-habit and act to tighten the money spigots. Since May 2012, traders have played the "Great Rotation" – shifting out of bonds and moving into stocks, seen as the best way to profit from the Fed's radical schemes. However, there's a good chance that going forward, the "Great Rotation" could morph into the "Dangerous Divergence". If left unchecked, an extended slide in the T-bond market could trigger an upward spiral in the 10-year yield towards 3%, which in turn, would threaten to blow up the Fed's Ponzi scheme.

Already, the ratio between the value of the Dow Industrials and 10-year T-bond futures has reached the 116 level – doubling from where it bottomed out in March 2009, and within striking distance of its 2007 high. A last gasp rally in the US stock market could be the catalyst that triggers a sharp sell-off in T-bonds. At that point, the "Dangerous Divergence" could reach the breaking point, leaving the bond vigilantes to do their dirty work.