END_OF_DOCUMENT_TOKEN_TO_BE_REPLACED

The S&P is not pricing in enough bad news. Unless...

ON MONDAY, the Super Committee became the "Stupor Committee" and stunk up the D.C. Beltway, writes Gene Arensberg's GotGoldReport.

So yet another deadline and opportunity has come and gone and the American people are delivered yet another example of the lack of leadership they have become accustomed to. More proof that we need a "Drain-O election" to unclog the buildup of "political hair" in the giant drain of Washington. 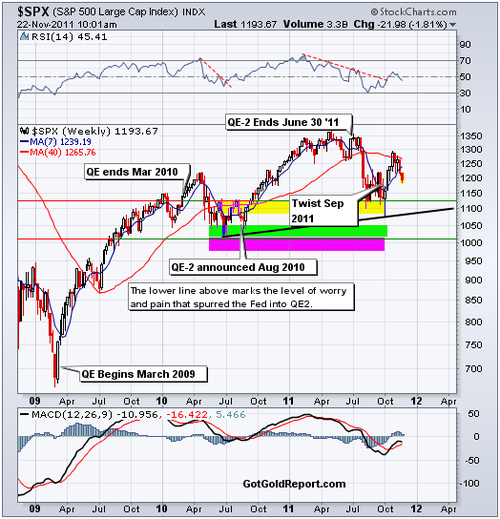 So far, at least, the lows put in for 2011 were higher than last year for the S&P 500. Despite very worrisome, seemingly extremely bearish contemporary news the Big Markets have not been a place that rewards mega-bears. Certainly not in the same way that the Big Markets rewarded mega-bears in the fall of 2008 and early 2009.

We assign a great deal of respect to the action of the Big Markets and the collective wisdom of countless thousands and millions of investors/traders worldwide. In our simple view the chart of the Big Markets does not "match" the news, worry and angst we are all subject to when we read the news or tune into cable financial television. Our impression is that if the Big Markets matched the news and if equities markets reflected the very dire predictions of the numerous prophets of doom on the cable networks, they would have to be marking new and lower lows, not higher lows as we've seen recently.

As we muse on that for a moment, our thoughts turn to what on earth the Big Markets could see amidst an ocean of troubling signals, with squadrons of potential black swans in every direction? Of course there is not just one thing, there are hundreds of "things" the market is discounting at the same time. If we subscribe to the notion that it is on the margin that markets are moved and market battles won and lost, then although we know that it is not just one thing that moves the markets, we have leave to discover the one or two or three things at the margin that the markets are using as an overriding fulcrum to lever the action one way or another.

It is in that context that we ask the question below. (We ask, we do not posit this as the only answer.) Is the collective action of the Big Markets in recognition that there is now a national discussion about debt, deficits and the reduction of the Federal government expense? Even though those discussions, debates and arguments are very messy, painful and so far not very productive? Are the Big Markets now heralding that a political sea change is about to unfold?

In short, is the market "saying" that it welcomes the messy discussion because it is a discussion we have needed to have for a very long time?

We are enamored by that notion. It is a good-sounding idea to us here at Got Gold Report. We would like to think that the S&P 500 is beginning to price in a badly needed sea change in the political landscape. Perhaps in the opposite way that it reacted once it became clear who the Democratic nominee was going to be (and the hard left turn the country would take under him) in the summer of 2008. And if it can turn in higher lows in this environment, imagine what it could do with the news of good progress on that front sometime in the future.

Along those lines we are also thinking that the S&P may already be looking forward to next November, handicapping the odds of a clean sweep by the kind of people that would do what is necessary to slow down the growth in government spending. People who would put checks on the malignant explosion of even more mind-numbing, job killing punitive regulation which causes so much interference and uncertainty to business; people who would make it Job One to repeal the onerous and anti-productive mistakes of Obamacare and Dodd-Frank.