END_OF_DOCUMENT_TOKEN_TO_BE_REPLACED

The "Good Fed" is nothing but a bad magician...

THE WORSE the outlook for the economy, the brighter the prospects seem for the stock market, writes Eric Fry in the Daily Reckoning.

"World stock markets rallied on Wednesday," the Associated Press explains, "as investors hoped that the Federal Reserve would respond to mounting signs of weakness in the global economy by providing more stimulus to the US economy."

Such is the tortured logic that has powered the Dow's recent 1,000-point advance. Day after day, financial news outlets trot out some version of the "bad is good" storyline to explain the rallying stock market.

But don't blame the messengers for publishing and promulgating this popular fairy tale. The media outlets are merely parroting what the professional investors, professional economists, professional politicians and other professional storytellers are saying.

The media are merely practicing the American folkloric tradition that brought us all those great stories about Paul Bunyan, Pecos Bill and Blackbeard. But those are just stories and everyone knows it. You won't find too many investors placing their trust in Babe, the Blue Ox, to rescue the economy.

To be fair, the professional storytellers would not continue telling the "bad is good" story if the investing public were not so eager to hear it. But like a little child at bedtime, most investors turn to the professionals and ask, "Please tell me that story again, Daddy. The one about the really terrible economy that gets rescued by that really good Federal Reserve Chairman...I love that one!"

The professionals are only too eager to oblige, especially because the professionals have entrusted their entire careers to the notion that the Federal Reserve has the power to fix broken economies. But fairy tales are supposed to be fairy tales, not investment strategies.

Earlier generations of professional investors would respect the Fed's influence over the stock market, without making it a lifestyle. "Don't fight the Fed," they would say. But for most of today's investors, the Fed is not merely one influence among many; it is the only influence that really matters...and it is always a positive influence for the stock market. "Don't fight the Fed" has become "Always jump in bed with the Fed".

Don't believe it, dear reader. The "Good Fed" is a fairy tale. And the Good Fed's activities are mere magic tricks.

Ben Bernanke may be able to pull a monetary rabbit out of a hat from time to time, but he can't pull a sick economy out of a recession, especially not when that sick economy is in the midst of a massive de-leveraging cycle.

He keeps trying anyway. He keeps reaching up his sleeve to pull out lower and lower interest rates. The audience giddily applauds and squeals with delight, "Wow, that's amazing! Negative T-bill yields! How does he do it?!"

And yet, no one in the audience ever seems to budge from his seat and ask, "Hey can I have one of those rates? I'd like to borrow some money to expand my business or buy a house." No one asks, because no one wants to borrow. The US economy is in the midst of a credit contraction, not a credit expansion. Most folks are in re-payment or default mode, not in borrowing mode. As a result, Bernanke's magic works no magic at all. The Fed's wand works no wonders...

The stock market may rally for a while in the hope that a QE3 can accomplish what QEs 1 and 2 both failed to do. Ben Bernanke and his magic quantitative easing cannot make jobs appear out of thin air, nor can it "Poof!" into existence an economy that grows or a Congress that cuts spending. If you want an economy that grows, you need entrepreneurs, and if you want a Congress that cuts spending, you need a spaceship that can accommodate 100 senators and 435 representatives.

Things are running a bit backwards here in the US. The job market is shrinking and the government is growing. The nearby charts illustrate two very dismal effects of these trends. First, as Investor's Business Daily reported recently, the US government's safety-net spending now exceeds every Dollar of tax revenue from personal income taxes and payroll taxes. 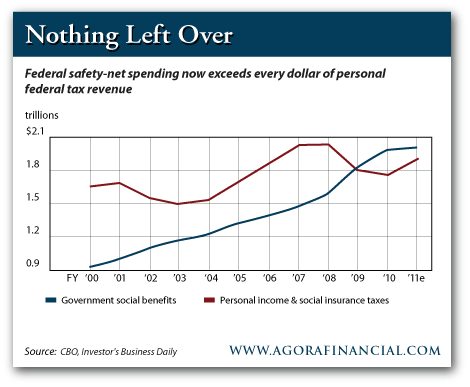 "The federal government will spend about $100 billion more this year on social benefit programs than it will collect in personal income and payroll taxes," IBD explains. "Back in 2000, the government had $720 billion left over from personal tax receipts — more than 7% of GDP — after fulfilling its safety net obligations. This reversal highlights how much the government is supporting household demand amid high unemployment, and helps explain why cutting deficits will be a grind unless growth picks up."

This reversal also highlights the tyranny of "wealth re-distribution." The rich pay directly in the form of higher taxation. The poor pay indirectly in the form of diminishing opportunity. Governments that tax production to excess tend to foster less productivity. Such is the trend that has been accelerating for several months, if not several years. As a result, opportunity is on hiatus and the entire citizenry feels the effects, especially that portion of the citizenry that struggles to find work.

As the chart below shows, the Bloomberg Consumer Comfort Index is languishing near all-time lows. "The index has been stuck below minus 40, the level associated with recessions or their aftermath, since the end of February," Bloomberg News explains. "The overall gauge, which began December 1985, has averaged minus 45.2 this year, compared with minus 45.7 for all of 2010 and minus 47.9 in 2009, the year the last recession ended." 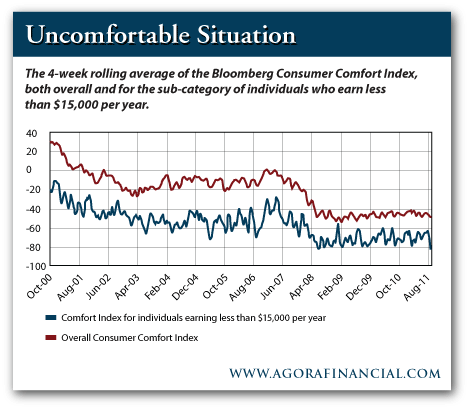 At the same time, the index reading just plummeted to an all-time low of minus 90.6 for those individuals in the index who earn less than $15,000, the worst reading for any group since record-keeping began in 1990.

If you need a magician for a birthday party, call Bernanke. But if you need someone to fix your broken economy, call an entrepreneur...if you can find one.

Looking to protect what you've earned by Buying Gold? Discover how BullionVault dramatically cuts the cost of gold ownership...