END_OF_DOCUMENT_TOKEN_TO_BE_REPLACED

An Australian perspective on Japan's policies towards the Yen...

TAKE A LOOK at the chart below, writes Dan Denning for the Daily Reckoning Australia.

This version is a ten-year chart showing the exchange rate between the Australian Dollar and the Japanese Yen(the black line) and the All Ordinaries (the orange line). They aren't quite joined at the hip. But somewhere between the hip flexor and the upper torso there's definitely a connection. 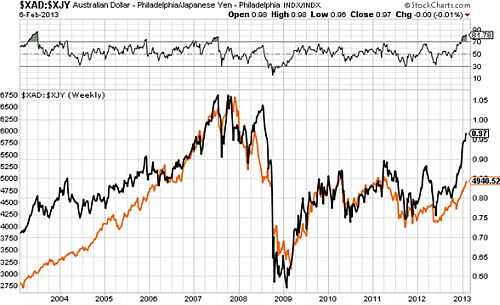 If you only looked at the last four years, you could make the claim that the rise in the All Ords was effectively capped by short-term highs in the Aussie Dollar against the Yen. Three times the exchange rate topped out between 85 and 90 in the last three years. And on two of those occasions, the All Ords made a run at 5000 and then retreated.

But if you go back a bit further in time, you can see that when the Yen was weakest against the Aussie, stocks were at their highest. What's interesting about this particular moment in the market is that the exchange rate has broken out above those three previous highs but stocks have not. What will happen next?

Anything could happen in a universe of infinite possibility. But let's narrow it down to two scenarios. In the first scenario, stocks may not follow the exchange rate, and the exchange rate itself could come back down to below 90. This would happen with a combination of a weaker Aussie Dollar and a stronger Yen. For reasons you'll see in a moment, a stronger Yen seems pretty unlikely in 2013.

The second scenario is that both stocks and the exchange rate head higher. In other words, you get a rally in Australian stocks driven almost exclusively by capital flows from overseas. Sure, some of the move will be driven by money coming out of 'safe' fixed income assets. And some will come from cash. But a lot will come from investors playing the 'carry trade'.

If you remain cold, rational, and analytical about it, you might be able to trade the move anyway. You recognize it for what it is – pure nincompoopery – but your understanding the game makes it possible to profit from it without buying into it (on an emotional level). That's one strategy if the orange line makes up for lost time and starts to follow the black line.

That's certainly not the strategy we're recommending to our readers, though. But it's always good to challenge your beliefs and convictions with facts. If they can't hold up, they weren't very good to begin with. In this case, the biggest challenge to our skepticism about the rally is the determination of Shinzo Abe.

Japan's new Prime Minister is determined to force his central bank to weaken the Yen. There are two ways to do this. The first is to print a lot of money and buy assets. This is the single best argument for abandoning your reason and buying stocks. If the Bank of Japan outdoes Ben Bernanke, then it will print trillions of Yen to bid up asset prices. The bidding up of asset prices is what makes the currency depreciation acceptable to the public (for a while).

The second way to weaken the Yen, and to target inflation, is to pursue negative nominal interest rates. That is, to drive interest rates below zero. In real terms, when you subtract the rate of inflation from the rate of interest, interest rates are already below zero in Japan. But even that is not enough to get people to part with cash, spend, and embrace irresponsible short-term planning as the central value in life. The solution?

The solution is to penalize anyone who holds cash, including banks holding 'excess' cash reserves with the central bank. Under a negative nominal interest rate regime (say that three times fast!), you start the year with $100 in the bank and end the year with $95 (when interest rates are -5%). Guaranteed. If you're a depositor of any sort, you pay the bank rent for storing your money.

Negative nominal interest rates would be pretty stiff disincentive for banks to hold cash for safekeeping with the central bank. For example, look at what US banks have done at the Fed since the global financial system began disintegrating in 2007. Over $1.4 trillion in 'excess' reserves are held in the US. Banks would be guaranteed to lose money on that in a world with negative nominal interest rates. 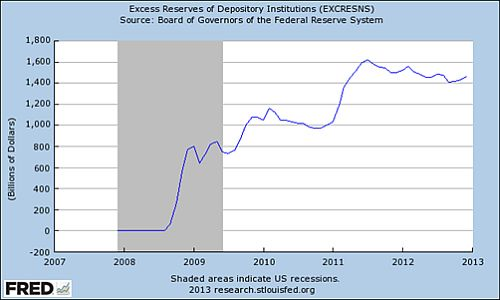 The only reason to embrace a world of negative rates is to force people to part with cash. This is the culmination of the stupidity of the Keynesians. If you define growth and prosperity strictly in terms of consumption and spending, then it makes perfect sense to destroy the financial system in order to get people (and banks) to spend money.

There's a reason banks aren't loaning money, though. There are no good risks to take. And there's a reason people aren't spending money in places like Japan and America. They're worried about the future. They would rather have liquid cash on hand in uncertain times than a nice portfolio of overvalued stocks.

If anyone is going to lead us into the world of negative nominal interest rates, it's Japan. The outgoing Governor of the Bank of Japan, Masaaki Shirikawa, can't get out fast enough. He was originally scheduled to leave in April. He'll now leave March 19, three weeks ahead of schedule.

In currency war terms, it means Japan's spring offensive against the Yen could begin in a matter of weeks. Will it go nuclear on interest rates? All local eyes will be on the All Ordinaries to see what happens next.

If you step back from the metaphor, you'll see that it's ordinary people who are now caught in the cross fire. Most people have their wealth in stocks, cash, and real estate. Asset price inflation feels good. But it's the leading edge of consumer price inflation. And that kind of inflation only makes you burn through your savings more quickly. Inflation makes most people poorer, in real terms.

This situation creates a real dilemma for people. How do you keep your money and your family safe and secure when shots are being fired all around you?

Thinking of buying gold or silver? See how you could cut your costs dramatically with BullionVault...