END_OF_DOCUMENT_TOKEN_TO_BE_REPLACED

Can you imagine economics without today's fixation on statistics...?

WE OFTEN imagine the study of economics today to be mostly about manipulating statistics, writes Nathan Lewis at New World Economics.

However, that is a new phenomenon. Today's government-compiled statistics are mostly a post-World War II phenomenon. This fascination with statistics is really an outgrowth of the statist trend of economics in those days, particularly the explosion of Keynesian economic management fads.

Before 1950, governments didn't really have much in the way of statistics. What existed was often compiled by academics. Maybe this was a good thing?

Consider, for example, Sir John Cowperthwaite, who was Hong Kong's Financial Secretary from 1961 to 1971. Cowperthwaite is generally recognized as a premier architect of Hong Kong's amazing success since 1950.

What was Cowperthwaite's primary suggestion for other countries that wanted to follow Hong Kong's path?

"Asked what is the key thing poor countries should do," according to one account, Cowperthwaite once remarked: "They should abolish the Office of National Statistics." In Hong Kong, he refused to collect all but the most superficial statistics, believing that statistics were dangerous: they would led the state to to fiddle about remedying perceived ills, simultaneously hindering the ability of the market economy to work. This caused consternation in Whitehall: a delegation of civil servants were sent to Hong Kong to find out why employment statistics were not being collected; Cowperthwaite literally sent them home on the next plane back."

This might seem odd, but one of the characteristics of Keynesian central planning, or what we know as "mainstream economics" today is an excessive fixation on statistics like GDP or the unemployment rate. This tends to lead to various measures to jigger the statistics, often in ways that don't fix any underlying problems, and often make problems worse. Two such examples are aggressive government deficit spending and, closely related, the expansion of government employment in the face of declining private sector employment.

You don't really need GDP statistics to know if the economy is doing well or not, or if there is adequate job creation. This should be readily apparent from anecdotal data, talking with businesspeople, and so forth.

"Expectations and information about the growth of GDP per capita have a large influence on decisions made by private and public economic agents," says the abstract of a 2007 paper from the University of Amsterdam. "It will be argued here that GDP (per capita) is far from a robust indicator of social welfare, and that its use as such must be regarded as a serious form of market and government failure...It further examines the nature and extent of the impact of GDP information on the economy, revisits the customary arguments in favour of the GDP indicator, and critically evaluates proposed alternatives to GDP. The main conclusion is that it is rational to dismiss GDP as an indicator to monitor economic progress and to guide public policy. As is clarified, this conclusion does not imply a plea against growth, innovation or national accounting."

What if you didn't compile the hypercomplex "Consumer Price Index"? Governments got by without it for centuries. In that case, you would probably focus a lot more on stable money, which has always meant a gold standard system. Let prices take care of themselves. Most of these efforts to compile such statistics, in the 1930s, were really tools to promote Keynesian management. Since "prices" fell a lot in the 1930s, there was "deflation" and thus the need for a monetary response. It was just a roundabout argument for currency devaluation.

"It is easy to observe, that all calculations concerning the balance of trade are founded on very uncertain facts and suppositions.," wrote David Hume in his essay "Of the Balance of Trade" in 1752. "The custom-house books are allowed to be an insufficient ground of reasoning; nor is the rate of exchange much better; unless we consider it with all nations, and know also the proportions of the several sums remitted; which one may safely pronounce impossible."

Imagine, today, if there were no government statistics, not even the most rudimentary ones such as GDP, the CPI, and the unemployment rate. We would still know that the economy stinks. However, instead of trying to jigger the economic statistics in various ways, to produce an illusion of health where there is none, we might just try fixing the problems instead. 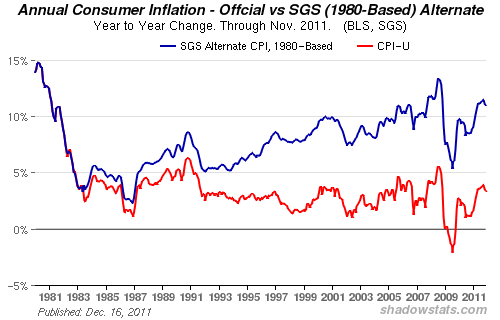 I think the SGS numbers themselves are a bit exaggerated, but you get the idea. So, you could say that although we have statistics today, they are so fictionalized that we might as well have none at all. Their only purpose is to obfuscate economic reality.

Another problem emerges when trying to use long-term statistics. Any sort of GDP or CPI statistic from before 1920 or so is basically a wild guess. Even worse, it is quite common for what amounts to a commodity price index –  much like the Commodities Research Board Continuous Commodity Index –  to be used as a proxy for a "consumer price index." This seems to show huge variation in the "CPI" prior to 1920, in other words, during the gold standard era. This is wholly erroneous.

Hong Kong has been one of the greatest success stories of the past half-century, without the use of statistics. They are of use to historians, but not much good for policymakers.

Buying Gold – now simple, secure and cost-effective like nowhere else thanks to world No.1 online, BullionVault...