END_OF_DOCUMENT_TOKEN_TO_BE_REPLACED

Juergen Stark, the European Central Bank's chief economist, tendered his resignation on Friday. He said it was for "personal reasons". That's superficially true, if by personal he meant, "I'm personally opposed to the ECB buying heaps of Spanish and Italian government debt".

You wouldn't exactly call the current state of affairs in Europe a financial civil war. But it sure does feel like the old, anti-inflationary, mostly German guard of European monetary policy is losing a turf war with the new guard. The new guard is probably people like Italy's Mario Draghi, who will become the new ECB president at the end of October. 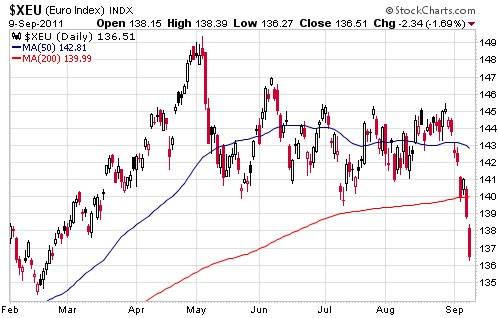 The Australian market was down as much as three per cent this morning. Is this an over-reaction to far away events that don't have any obvious impact on the Australian economy? After all, if Greece defaults on its debt, it's a Greek problem and a German problem and a European problem. Why should Australian stocks get clobbered because Greece can't pay its bills?

Well, a Greek default is going to cause losses for European banks (and for the ECB). Banks will have to be recapitalized. And beyond Greece, there is the issue of losses faced by banks on Italian and Spanish debt too.

In other words, we are right back to where we were in 2007-2008, with basic doubts about the solvency of the banking system. That is what investors have to worry about. In 2008, the freezing up of the credit markets left Australia high and dry. Risk capital hunkered down in US Treasury bonds and notes.

Australia is a nice place for capital to visit when the sun is shining and banks are solvent. But in a synchronized global solvency crisis, the money runs home to momma.