END_OF_DOCUMENT_TOKEN_TO_BE_REPLACED

Opening act. It could be the ultimate target because there is a lot of support at that area and a good solid bear phase could put the Fed on ice and impose some changes to Donald Trump's bull in a China shop policy style.

So for now I see no reason to make dire proclamations beyond that key support level, as so much will depend on incoming information in 2019.

At this point, even 2100-2200 is not technically in the bag because the US stock market clung to last ditch daily chart support, as per the marginally favored short-term NFTRH view.

So all of we bear callers need to remember that as ugly as the charts are, support is not broken until it is...broken.

Before we dial out to a couple of simple SPX charts showing the prospective downside targets, let's review the situation with a less than simple chart.

Below is a chart from the NFTRH Market Internals segment that simply says when the weekly EMAs 20 and 50 trigger down, a bear signal would be in effect.

This occurred near the beginning of the bear markets that began in 2000 and 2007. Ah, but there were two big time fake outs in 2011 and 2015 when harsh corrections failed to deliver anything more from the bear side.

So let's add some panel indicators to the chart and see what might be different now from 2011 and 2015 and what might be similar to 2000 and 2007. What we find is the SPX/Gold ratio at our initial (and potentially though not definitively final) upside target as we've been chronicling for much of the last year in the Macro Amigos updates.

Amigo #1 (SPX/Gold) got to destination. Amigo #3 is the Yield Curve and it is still flattening like a pancake and while you could say it is very near destination, it has not yet started to steepen and so, is not yet virulent toward stock bulls.

In 2007 the stock market did not top until well after the curve steepening began but in 2000 the conditions occurred in unison. All in all risk is still very high, as it has been for most of 2018, actually. 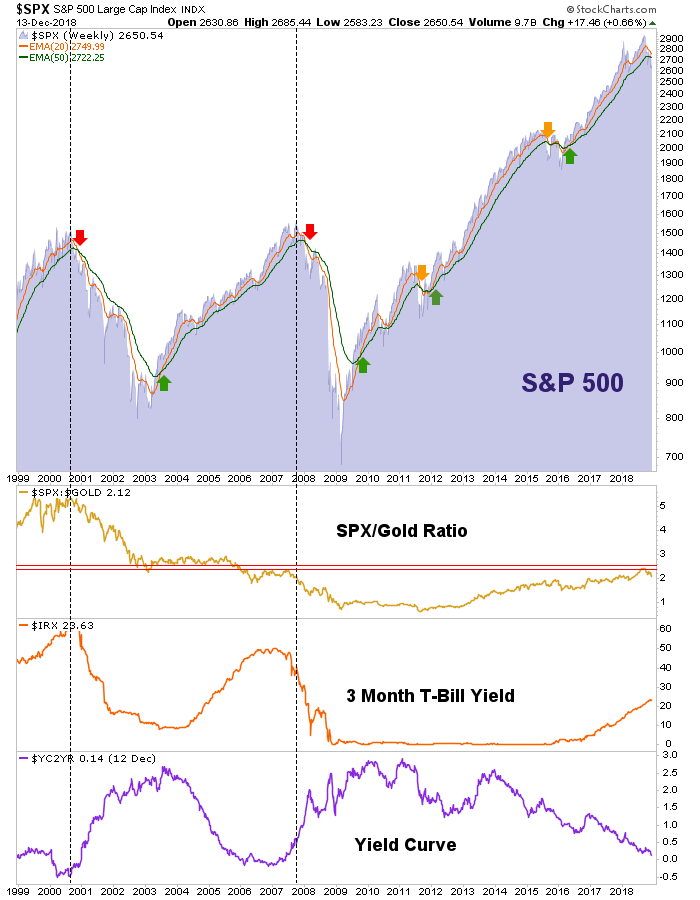 The other indicator is the 3-month T-Bill yield in the middle lower panel. This yield is highly sensitive to and correlated with the Fed Funds Rate. In 2000 it topped out simultaneously with the SPX while in 2007 there was a lag, as with the Yield Curve.

The bottom line is that SPX is in a volatile phase with key moving averages not yet triggered but moving in that direction while the market's indicators shown below flash 'high risk'.

Does all of the above mean we are going bearish? You'll have to ask a certified guru who's willing to sign, seal and deliver a handy prediction. But the probabilities by these and many other indicators we follow flash bearish and hence, that is our favored plan. Simple.

So assuming that plan plays out, let's look at the two primary downside objectives for SPX.

The first is as we've been discussing, a measurement of a still hypothetical Head & Shoulders topping pattern that has formed in classic fashion, with the higher high (Head) having come with a significant bearish divergence by MACD and RSI (among several other technical and macro indicators diverging the market).

The beauty here is that the pattern measures right to the target which we have held as logical for other reasons, like the market poetically taking away the gains of the Trump Rally as this bull in a China shop appears to have little more than a rudimentary understanding of how sensitive America's most progressive businesses are to well functioning global trade.

But smart money is only smart if it is buying forward fundamentals and I am more than willing to stop and evaluate the situation at that time with little need to bank on one or the other eventualities. 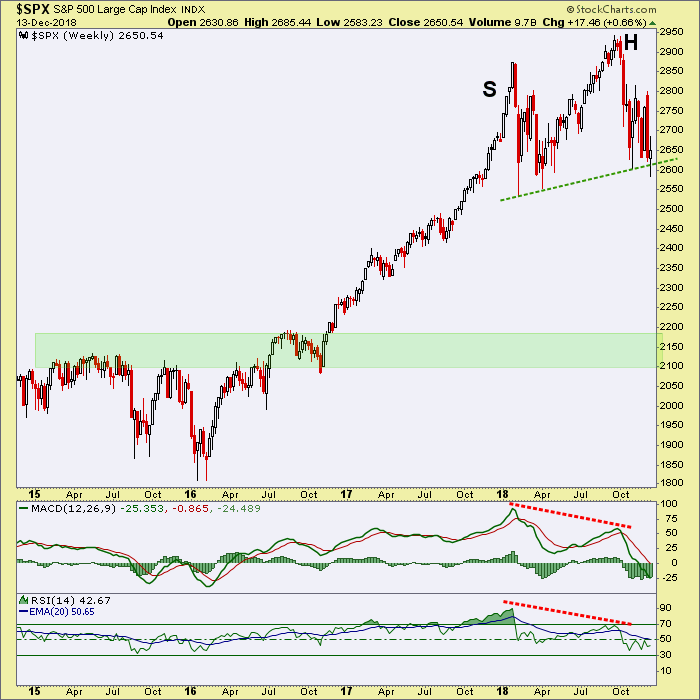 Dial the chart out to a monthly view, and look at that little shelf of support there at 2100. It would only take away about a half of the bull leg from the blue sky breakout in 2013.

Again, as a handy reference that was a time when we were ramping up a bullish view on the Semiconductor Equipment industry as an early cyclical indicator. Today, we are almost a year on from clearly stating the opposite view: Semi Canary Still Chirping, But He's Gonna Croak in 2018. You can add that as yet another indicator that just maybe this time it's different (from 2011 and 2015).

So if we go bear and if SPX does not hold the 2100 area, then prepare for a take back of the entire new secular bull market; an all-too normal test of the big breakout. Don't think it can happen? Think again. Who back in 2013 thought that SPX would hit 2900 just 5 years later? Absolutely not me, for one.

So technically its a gambler's game. Is MACD doing 2000, 2008 or 2015 in its current trigger down condition? And what about RSI? We have previously noted that the long, drawn out overbought situation in 1995-1998 resulted in the '98 correction prior to a big new upside burst to the bubble top before the market finally rolled over. But a shorter spike to overbought in 2006-2007 was met with a terrifying bear market once RSI turned down.

More recently there was the drawn out overbought situation in 2013-2015, which ended up resolving bullish as happened in 1998. Today we have something similar to – but even scarier looking than – 2007's relatively short overbought condition and abrupt drop from overbought. 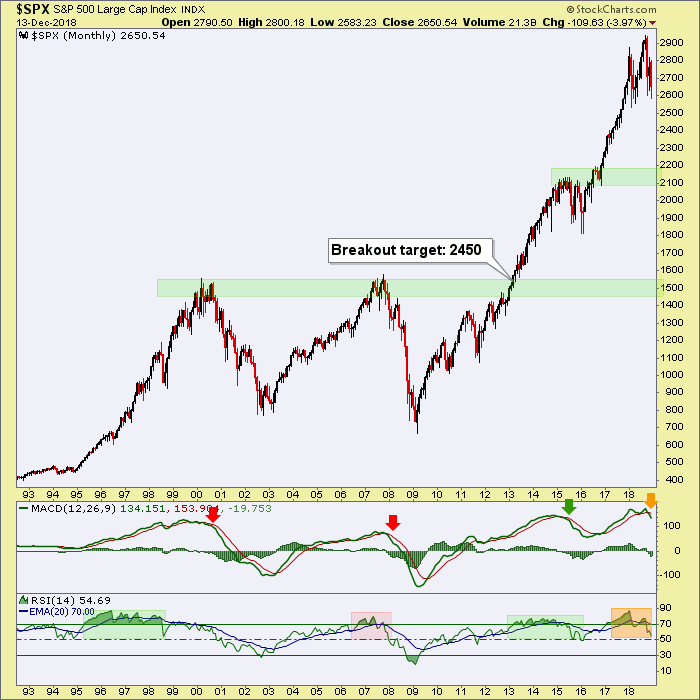 So there you have it. Some TA mumbo jumbo and some indicators. My friend's question was an excuse to write a relatively breezy article this week and get to my roots, which is charts and indicators.

The two combined have us leaning to the bearish side for the first half of 2019. I am currently straddling the market with a view of a short-term grind (potentially with an upward bias) to finish the weekly pattern's right side. But as noted repeatedly in NFTRH, the dominant view is bearish.

It's now on the bulls to prove otherwise and undo the bearish signs that have gathered. They did just that in 1998, 2011 and 2015. But on this occasion there are some key differences and so, in the event the bear view proves out, we have a couple of long-term charts showing logical support areas.