END_OF_DOCUMENT_TOKEN_TO_BE_REPLACED

Who's got the gold? On futures contracts, at least, it's private investors...

In fact, the small players – aka "Non-Reportable Positions" in the official data – have been big buyers for the past three weeks. Net long positions held by small specs have notched new highs in the last three weekly Commitments of Traders reports published by the Commodity Futures Trading Commission.

Now, some traders would look at this and figure it's time to sell. It seems that money managers took to that notion last week. While small specs were buying, money managers were liquidating their long positions. Not aggressively, mind you, but enough to drop the Gold Futures market's net speculative length (of bullish minus bearish contracts held by non-industry players) by 0.2%.

So, whose lead do you follow if you're a gold investor?

Well, if you correlate the week-by-week changes in gold's price and investor bullishness, you've got to give the nod to the money managers instead. 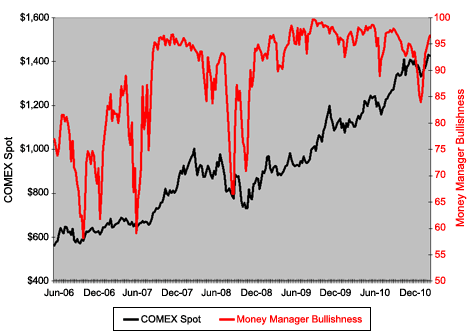 Over the past five years, the correlation between gold's price and the strength of funds' bullish positions has been 68%. Not perfect, certainly, but well beyond randomness.

And the little guys? How've they fared? 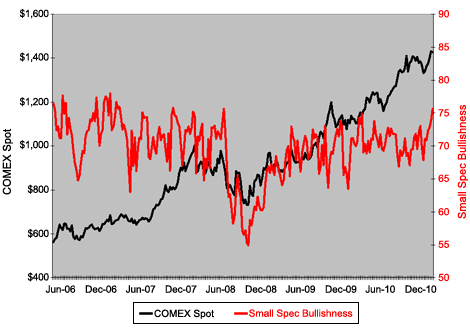 Small traders have been more fractious than the momentum-following money runners. Being lightly capitalized, the little guys probably haven't had the staying power to ride out gold's volatility either. Especially when margin rates are raised.

All told, you'd get a better shot at Gold Futures profits if you followed the big guys' lead week-to-week – and last week, they were sellers.

Want to Buy Gold free from leverage, counter-party default or credit risk? Go to BullionVault now to slash your costs...