END_OF_DOCUMENT_TOKEN_TO_BE_REPLACED

Betting on renewables is still a profitable move, says this analyst...
As the POLITICAL and financial pressures on fossil fuels mount, investors are starting to explore the renewable energy space with an eye toward reaping its potential.
Here Rupert Merer, energy sector analyst for National Bank Financial, tells The Gold Report's sister title The Mining Report why betting on the future of renewables is a prudent strategy for profit growth.
The Mining Report: Where is the renewable energy space headed in terms of profitability?
Rupert Merer: Most renewable power companies have long-term production contracts that provide a relatively low-risk return on invested capital. This is a capital-intensive industry with a lot of invested debt and equity capital. There is excellent visibility on cash flow and revenues – as long as 40 years out in the case of small hydro contracts. The duration of small wind and solar contracts is 15-20 years.
With steady cash flow, the renewables sector can provide dividends of more than 5% for income seekers, typically with good visibility on future dividend growth. As solar and wind power have seen rapidly declining costs over the last few years, they have also seen very high growth. We think that this growth will continue and there should be an increasing number of investment opportunities. 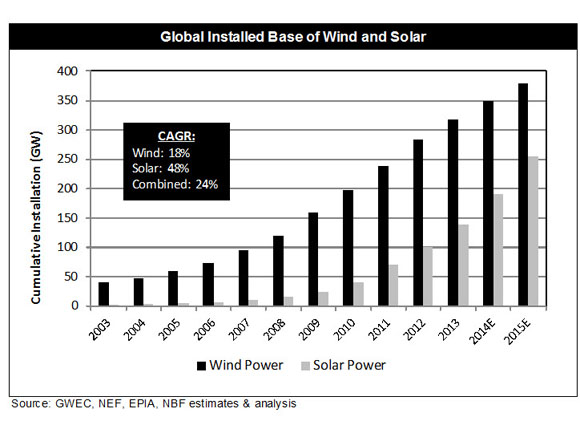 TMR: What are "sustainability investors"?
Rupert Merer: There are a few funds in Canada, the US, and the United Kingdom that invest only in renewable power assets. Some of these fund managers believe that there is an inherent risk with fossil fuel investments. Of course, if governments start to tax carbon at a higher rate or introduce cap and trade, then that could be a limiting factor for using fossil fuels to generate electricity.
Investors in the energy sustainability space typically look for a ratio of more than 50% clean energy in the stocks in their portfolios. Clean energy includes renewables and power plants that use natural gas, provided that the plants are high-efficiency co-generation plants or combined cycle plants.
TMR: How does a renewable energy project secure a long-term contract?
Rupert Merer: That depends on the jurisdiction. The Canadian power market is regulated at the provincial level. Ontario is the most populated province in the country and it has been the most aggressive at developing renewable power over the last decade. In the past, the government has offered fixed price contracts, or "Feed in Tariffs", for renewable power at a price that would provide an attractive economic incentive for developers. However, generally, in Ontario or in other provinces, firms will bid on, say, delivering 200 megawatts (200 MW) of wind power, under a competitive request for proposal. The contract will typically go to the lowest price bid from a viable entity.
In the US, contracts are often arranged between developers and utilities or businesses in the private sector. Projects have typically also included financial partners that have purchased tax credits from the developer.
TMR: Given that wind and solar intermittently generate pulses of energy into the grid, has the grid developed the capability to access renewable energy when it is live, while compensating for it when the generator goes temporarily fallow?
Rupert Merer: The easiest way to compensate for intermittency is to increase transmission capability.
If the local area has more wind or solar power than it can use, it can send it to a neighboring region. Another way to manage intermittency is to decrease the use of power on the grid when there is a deficit of renewable energy. For example, operators can shut off air conditioning loads when there is a deficit of power. As the amount of renewable power grows, we will need to find better ways to store power.
Today, the best way to manage volatility in electricity supply is the regulation of hydropower production. With our hydro capability, Canada is a giant battery for the U.S! British Columbia controls about 13 gigawatts (13 GW) of hydro. It actively trades power back and forth with California. In Quebec, more than 30 GW of hydro leverages a storage capability that can trade power with the Eastern Seaboard. Manitoba trades 10 or 13 GW with the Midwest. This works for Canada today, but it may not be enough in the future. 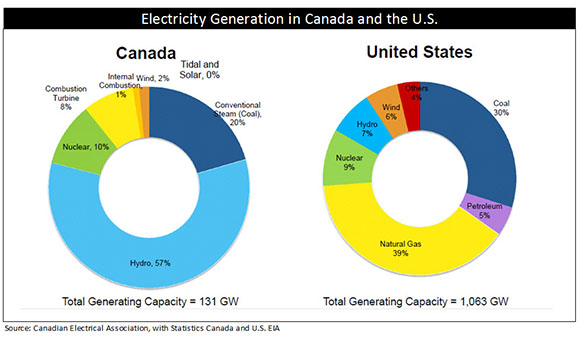 TMR: Electrical storage is an issue for the renewable energy sector. What are the advancements in battery and other storage technologies?
Rupert Merer: The majority of dedicated electrical storage in North America is in pumped hydro. The use of compressed air storage and reliance on batteries is increasing. But the lithium-ion battery technology has only advanced incrementally during the last few decades. The cost of manufacturing batteries has dropped with higher demand for battery use in electronics and electric vehicles. Today, batteries are still relatively expensive, but there is a push to increase the amount of storage on the grid, which could increase the demand for batteries.
Hydrogen technology and flywheels also continue to develop and should also play a very important role in grid management in the future. 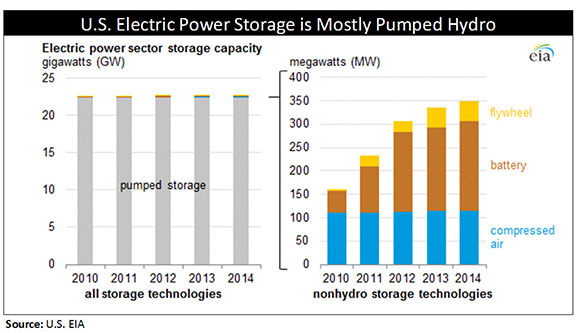 TMR: What is the role of graphite in battery production?
Rupert Merer: There is 10 times more graphite than lithium in a lithium-ion battery; it's an important part of the makeup of the electrodes. Typically, batteries employ a mixture of synthetic and natural graphite, but the synthetic material is relatively expensive at up to $6,000/ton. On the other hand, natural graphite is mined and processed for between $400 and $500/ton.
Graphite prices have been relatively soft for the last couple of years, but the high growth in battery markets should drive an increase in the demand for graphite. 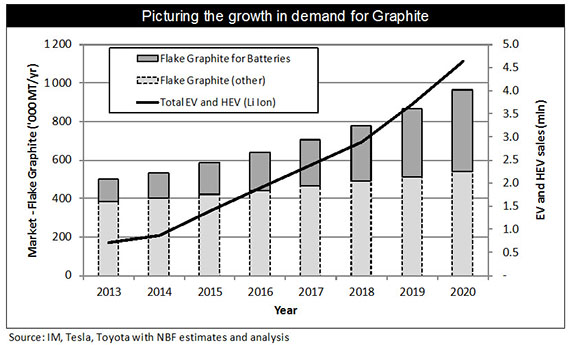 TMR: What will be the effect of the demand factor on the price of graphite?
Rupert Merer: One can argue that the price will rise because the demand is going to grow, but there are a fair number of deposits that are out there that are feasible at the current price. If the average price was to move up from roughly $1100-1200 per ton today to $1500-1600 per ton, a number of deposits could come on line. As with the history of most commodities, the graphite price will remain relatively stable in the long run. It can be volatile in the short term, but I do not assess that it will take a big increase in the price of graphite to increase the supply.
TMR: Do the existing graphite mines have the capacity to absorb the projected demand or is meeting that demand going to require exploration?
Rupert Merer: Most graphite – roughly 500,000 metric tonnes per year – comes out of China. But in the short term, we believe that there will be a contraction of supply coming from China. The Chinese government is clamping down on polluting mines, and there are news reports suggesting that the quality of the Chinese graphite is degrading as the miners strip the good deposits. Battery-grade material needs to be high purity. We see opportunities for graphite mines outside of China, provided that they can access very good quality graphite.
Graphite is not like other commodity businesses. A customer cannot just go onto a commodity board and pick up the desired product. Graphite customers have very specific technical needs for their products, and they look for producers who can meet those requirements.
TMR: Is the technology for wind farms improving? What are the main goals for wind technology going forward?
Rupert Merer: Yes, the performance on wind turbines is constantly improving. Wind turbines are larger and cheaper than a decade ago. Whereas the first generation of turbines were 50-100 kilowatts, they are now more than 2 MW. And there are big improvements in turbine blade aerodynamics, which allow for 30% increased production from a single wind turbine. Ongoing technological improvements in turbine design mean that wind farms are efficient in relatively low wind speed environments, and that opens up the number of places where wind power can function competitively. The cost of wind power has dropped across the board. Wind farms are being built that deliver product priced at $0.06/kilowatt hour or less, which is very competitive with power generation from any other source.
TMR: Are industrial users saying, "We're going to build a big turbine and when the wind is not blowing, we'll tap into the grid?"
Rupert Merer: That is a growing trend, but a wind turbine-powered factory could end up paying more for the grid portion of its electricity. When users start to cut out the utilities, they will incur higher standby charges. I expect that industrial users will want to be completely self-generating in order to cut costs. That brings us back to batteries, of course.
TMR: Thanks for your time, Rupert.