END_OF_DOCUMENT_TOKEN_TO_BE_REPLACED

IN 1967, a woman then known as Svetlana Alliuyeva arrived by plane in New York, writes Frank Holmes at US Global Investors.

Moments after landing, she held a press conference during which she renounced her native Soviet Russia, describing it as "profoundly corrupt." She burned her Soviet passport and called her father – who had died in Russia a decade earlier – "a moral and spiritual monster."

Her father was Joseph Stalin, the former dictator of the USSR.

In case you weren't around at the time, Svetlana's defection to the US was a very huge deal. Having changed her name after remarrying, Lana Peters became a US citizen in 1978. She made millions from her autobiography – something that was categorically unachievable in her communist homeland.

In 1991, she got to see the fall of the government her father once had ultimate authority over. Almost exactly 20 years later, Lana Peters passed away in Wisconsin.

Although Lana's story is a lot more complicated than I make it out to be, I think it's one that many Americans should remind themselves of and take to heart. She fled her father's communist regime to seek a better life, and she found it in the US

I share this with you now because here we are nearly 30 years out from the collapse of the USSR, and the lessons of the past appear not to be resonating with some young Americans.

Need proof? For four years now, the Victims of Communism Memorial Foundation – a Washington, DC-based nonprofit – has been polling Americans on their attitudes toward communism and socialism.

What the group found in its most recent poll is that, between 2018 and 2019, millennials' favorability of communism increased a whopping 36%. 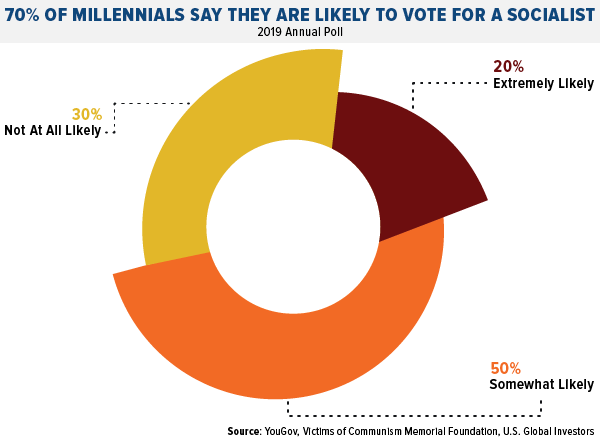 What's more, almost three quarters of millennials – those aged 23 to 38 – said they were "likely" to vote for a socialist-minded politician in upcoming elections. Half of those surveyed said they were "somewhat likely," while as much as 20% said they were "extremely likely" to support a socialist candidate in the mold of Vermont senator Bernie Sanders or New York congresswoman Alexandria Ocasio-Cortez (AOC).

We should all be alarmed about this.

It means, number one, that young Americans don't feel as if capitalism is working in their favor. And number two, it means we're not doing enough as a society to educate our citizens of the slippery slope that is collectivist thinking, which includes communism and socialism.

In addition, there are some who try to explain away the USSR's failure (or Cuba's or Venezuela's) by laying the blame not at the altar of communism, where it belongs, but at the feet of corrupt leaders such as Stalin, Fidel Castro, Nicolas Maduro and others. "It's not 'real' socialism," some like to say when confronted with the ugly reality of Venezuela's failed economy.

But such thinking is a fallacy, says famed psychologist and political commentator Jordan Peterson.

"It's the most arrogant possible statement anyone could ever make," he commented during a 2017 lecture. People who believe they have higher moral standards than Stalin, and who think they would have done a better job than him in his position, simply "don't understand" how the system operates, according to Dr.Peterson.

And even if they did know the system backwards and forwards, "there would have been someone else right behind you waiting to shoot you the first time you actually tried to do anything good" – which is precisely what Stalin did.

"So even if you do happen to be that avatar of moral purity that you claim implicitly," Dr.Peterson said, "the probability that you could get to act out your goodness in relationship to those possessed by your ideology is zero."

I'm optimistic that the US will stand as a beacon of freedom and opportunity in the 2020s and beyond, but with more and more younger Americans supporting socialism over capitalism, I believe it prudent to proceed with caution.

That means making sure you're following the 10 Percent Golden Rule, which states that you should have 10% of your portfolio in gold – split between physical gold such as coins and jewelry, and gold mining stocks and ETFs.

I've always believed that if you love your family, and if you seek to protect their wealth against potentially disastrous government policies, it's wise to hold gold. 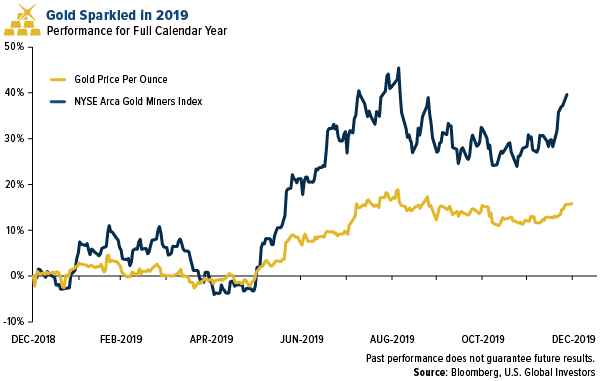 A new decade has begun, meaning now might be a good time to rebalance your portfolio.