END_OF_DOCUMENT_TOKEN_TO_BE_REPLACED

Who's exiting the "short" side of the US Silver Bullion futures market...?

TRYING TO KEEP tabs on what the largest, best funded and presumably the best informed industry-side "commercial" futures traders are doing in gold and silver opens a window into their expectations for the metals, writes Gene Arensberg in his GotGoldReport.

Or so we think. But what happens when these long-time veteran traders do the unexpected?

In most of our time following the weekly Commodity Futures Trading Commission (CFTC) commitments of traders (COT) reports, we saw increases in the price of silver metal reflected in the big commercial players' bearish position. Some of the largest hedgers and short sellers of silver futures are the largest bullion banks. A short position in futures benefits if prices for the commodity fall. So the Large Commercial Net Short positioning (LCNS) rose as gold and Silver Prices rose, because the incentive for big holders to hedge their inventory – or for short sellers to sell forwards, betting on the down side – went theoretically higher, too.

But what used to be normal has apparently been turned on its head since last September. As the Silver Price has been rising (and rising dramatically), instead of the biggest sellers of "paper silver" increasing their net short positioning in the US futures market, the big bullion banks have been "getting smaller" in the short selling of silver business.

The CFTC reports the positioning of the largest reporting banks in futures once each month (for the close on the first Tuesday of each month) in their Bank Participation in Futures reports. The graph just below focuses only on the largest US banks and is for the report just issued for February, 2011, for silver futures.

The blue line – measured on the right axis – shows the net short position, in US Comex futures, of the big industry-side players in Silver Bullion. The red bars, measured on the left axis, show the Silver Price in Dollars per ounce. 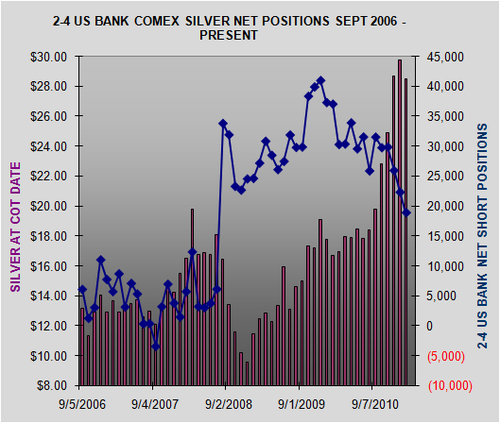 In the past we have witnessed very large one-month increases in the bullion bank net short positioning just ahead of very large declines in the price of silver, such as in August of 2008, the most recent and most obvious example. Big moves in the metal are sometimes telegraphed in advance if traders know what to look for.

Conversely, we have also seen very large decreases in the US bank positioning just ahead of significant increases in the price of the metal. A great example of that occurred in Gold Futures in August of 2010 when the US banks dumped more than 39,000 of their gold net short position with gold then at $1186 and staging for a run up to $1400 in December.

The "normal" condition is for the Big Sellers of futures to increase their net short positions on material price advances and vice versa. Regardless of the reasons why, it is crystal clear that the largest US banks in futures, the largest bullion banks, are losing their appetite to take the short side of silver futures contracts in New York.

To quantify that very large and very unusual change in positioning, in the last month of 2009 the big US bullion banks were net short contracts to deliver 204.8 million ounces when silver was trading in the $19s. In February of this year, literally last week, with silver now in the $28 range the reporting banks were on the net short side of "only" about 95 million ounces. (Less than half as net short now as they were in December of 2009 at much lower prices.)

This is, of course, only for the regulated and more visible futures markets in New York. We are not able to see the bank positioning in the less regulated and more opaque markets overseas, the OTC markets for physical, forwards and swaps.We have to believe that it is no coincidence that the price of silver broke out to new 30-year highs as the largest bullion banks, of which there are less than four and probably just two reporting bullion banks in silver, began closing out their net short futures positions.

We here at Got Gold Report strongly suspect that the amount of real Silver Bullion stored in warehouses and available for lending into the futures or forwards markets has declined to the point where the largest and smartest short sellers have a legitimate concern that metal would be available to borrow in the near future should the buyers of their paper short sales demand delivery. As evidence we can point to large declines in the amount of silver trade clearing reported by the largest members of the London Bullion Market Association, plus the reductions in the combined collective commercial net short positioning we have been writing about.

Add to those signals the chart above which clearly shows that as silver has been rising the bullion banks have been getting smaller in their selling of paper silver, not larger as we would "normally" expect.

We also strongly suspect that demand for physical silver at the moment is not, repeat not, as price sensitive as it has been in the past. In other words we get the feeling that silver accumulators in this market are not yet done hoarding. We think the large accumulators of silver are convinced that a structural shortage of commercial sized bars of silver lies ahead. If true, that helps to explain why silver saw heavy demand and checked up well above where we expected it to last week.

What should we think when the smartest players in the game are no longer willing to sell short? And who then is replacing them as the big seller in this market? And, do they realize that the best-connected former Big Sellers are scared to sell the market short now? When there is very little metal to borrow, short sellers become reluctant to take the short side.

If the strongest, best funded, best bullion-connected banks (the largest of which is J.P.Morgan Chase) cannot find metal to borrow – when it is they that have the largest, soccer-field sized warehouses (plural) of metal stored for their own accounts and for clients in the world, in London, then we tip our hat to those who are brave enough to think they can find metal to sell short in this tightening market.

We think that means that the "strength" of the short side is declining, by the way, and that probably means a much more volatile silver market just ahead. Cue Samuel L. Jackson's voice: "Hold onto your butts..."

That is all for now, but there is more to come.