END_OF_DOCUMENT_TOKEN_TO_BE_REPLACED

LAST FRIDAY, the Commodity Futures Trading Commission (CFTC) released its commitments of traders (COT) report, showing traders' positions as of the close on Tuesday, October 4. According to that report traders the CFTC classes as "commercial" reported their least net short positioning for silver in more than eight years, writes Gene Arensberg, founder of GotGoldReport.

Recall that a week saw a big drop in the large commercial net short positions (LCNS) in both gold and in silver futures. The "commercials" continued to reduce their net short positioning in this week's report, a small 1,932-contract reduction in Gold Futures, but another relatively large reduction of 5,339 contracts in the LCNS for silver futures. 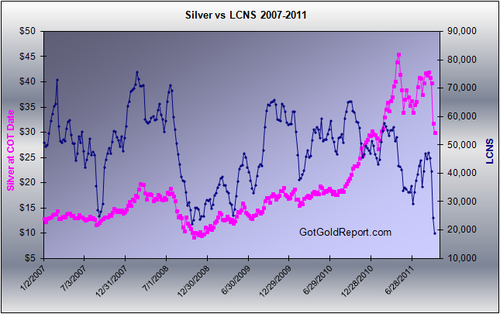 Indeed, we have to go all the way back to April 1, 2003 to find a lower commercial net short position for silver futures (15,845 contracts then with silver then $4.43). Just below is a much longer term chart of the silver LCNS for reference. Apologies are in order. This is a very large chart and it has to be reduced quite a bit to appear in this format.

As of Tuesday, the largest, best funded and presumably the best informed commercial traders of silver futures continued to get much "smaller" in their net short positioning for silver futures. There can be no doubt that the commercials view the current downdraft for silver as a silver plated opportunity to very strongly reduce their short bets in the leveraged paper silver contracts.

As shown in the graphs above, just since September 6, as the price of silver declined $11.95 or 28.5% COMEX commercial traders have reduced their collective net short positioning for silver by a remarkable 28,383 contracts or 60% (not a misprint), from 47,306 to 18,923 contracts net short.

We compare the nominal silver LCNS to the total open interest. We think that gives us a better idea of the relative positioning of the largest hedgers and short sellers – the Producer/Merchants and the Swap Dealers combined into a single category – compared to all the other traders on the COMEX.

When compared to all contracts open, the relative commercial net short positioning (LCNS:TO) for silver fell from an already low 23.8% to a shockingly low 18.7% of all COMEX contracts open. (Just four weeks ago the LCNS:TO reached 41.7%, the highest LCNS:TO of the year.) The silver LCNS:TO graph is just below. 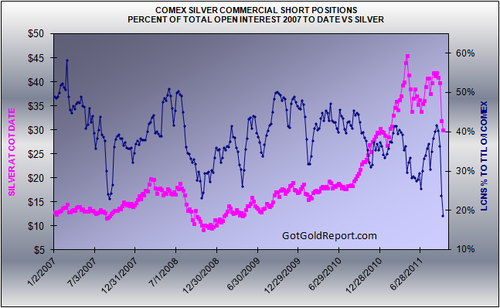 Clearly we can say that the large commercial traders have taken advantage of the current drop in the Silver Price to get the heck out of a huge portion of their formerly underwater net short positions. Indeed, as of Tuesday, they had reduced their net short positions to the equivalent of where they were with silver bottom hugging at $4.43 eight years ago.

Does that mean that silver is set to rally sharply? No, not necessarily, of course. Anything is possible short term, especially with all the angst out there and potential black swans circling (and landing). But what we think it does mean is that the heaviest of the "heavy hitters" in silver futures are positioning as though they really don't want to bet on a falling Silver Price very much.

As a matter of fact, in the Bank Participation in Futures report, issued monthly by the CFTC, we note that the less-than-four reporting US banks in silver futures reported a net short position of "only" 14,388 COMEX contracts, a reduction month-on-month of 9,471 lots (39.7%) to their smallest nominal net short positioning since July 1, 2008 – just ahead of the 2008 Panic (6,177 contracts net short then with silver then $18.10). 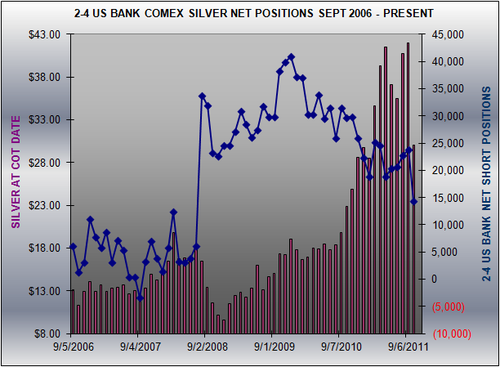 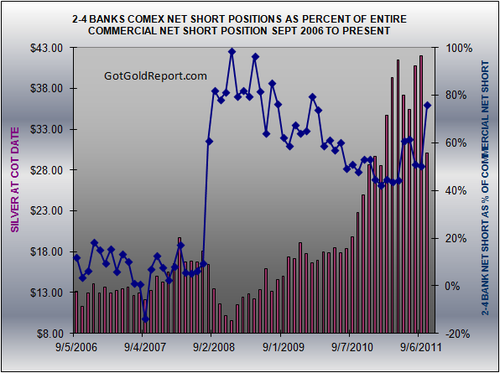 We must be very close now to the point where the commercial net short positioning becomes inelastic regardless of the price of silver. We must be very close to the point where a majority of the remaining commercial net short positioning is in the form of long-term hedges – we believe. An enormous amount of bullish firepower (the other side of the LCNS by inference) has hauled to the sidelines with the Silver Price still clinging to the $30 level. In a normal market this COT report would be pound-the-table bullish.

Bottom line: The market price of silver is liable to do anything very short term, but the largest of the largest commercial traders are positioning as though they believe that silver has a great deal more upside than the opposite.

Buy and sell silver 24/7 – with direct access to the spread – at Bullion Vault...