END_OF_DOCUMENT_TOKEN_TO_BE_REPLACED

Swings in the price of silver can be swift, vicious and misleading...

We already held silver mining stocks, and I personally owned silver bullion myself. But I was waiting for silver to fall in order to get in at a better price for my newsletter readers.

I tell you this to show how wide silver's swings can be. Moving from $6 to $8 in a few short weeks is a 33% gain. Dropping back from $8 to $6 again marked a 25% plunge in an even shorter period! I also want to show the long periods of flat prices that characterize the metal as well. 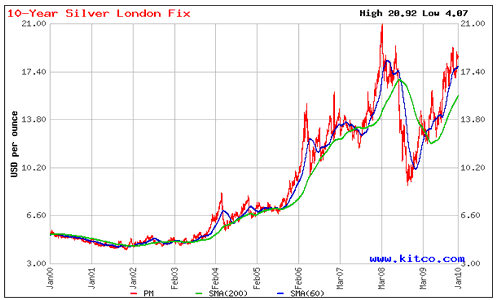 Today silver is trading nearer $18 an ounce. How high can it go – and with what kind of volatility?

I've often mentioned that a key thing for silver is for the metal to get back to test the 50% level of its huge decline from 1980 to 2001. This level represents a retracement of 50% from the highest point it reached in the previous bull market to the lowest point it got in the bear market.

Our 50% retracement of that loss would be around $26. So far, it has not done that. I'm still waiting. However, I want to give silver more leeway than Gold Bullion, since it is so much more volatile. My feelings are that when (and if) silver soars, it will do so in a fairly short time and go to levels that are hard to believe today. 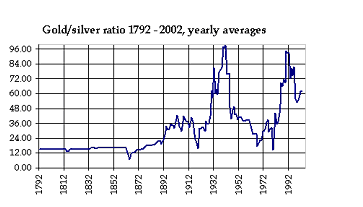 In real terms, $50 in 1980 bought what it would take more than $130 to buy today. But for silver, I think we are a long way from prices like that. Again, first I want to see how silver handles that 50% point. Maybe we'll get a chance to see that soon.

Since the US Dollar began in 1792, we've seen the ratio average around 16 to 1. However, at the peak of the last precious metals bull market, back in January 1980, silver went as high as just 14.8 ounces per one gold ounce.

So far, in this bull market, silver has not gotten below about 45:1, back in 2006. I'd want it to make another attempt at that ratio, and then see what happens. This, too, I think will happen in 2010. It's something precious metals holders will want to watch closely. 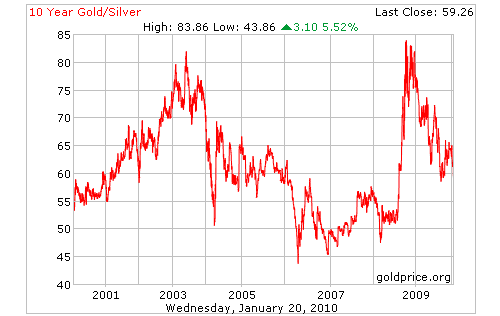 The way to best play silver is just to buy the bullion or coins, or one of the ETFs, and wait. Be prepared to see it very volatile, and don't have so much that you panic every time silver plunges. In silver bull markets, that's what silver does. If you can, just put your position out of your mind entirely, or at least at the very back of your mind.

But expect silver to run higher in the coming years. Nearly every government in the world wants their currency to decline in value to make it easier to service debt. That means real, timeless currencies like gold and silver will continue to rise in value.