END_OF_DOCUMENT_TOKEN_TO_BE_REPLACED

Silver Futures short positions could be a bullish sign for silver...

ON FRIDAY the US Commodity Futures Trading Commission – which runs the New York COMEX exchange on which gold and Silver Futures are exchanged – published its weekly Commitments of Traders report, writes Gene Arensberg of GotGoldReport.

The data show traders' positions as of the close on Tuesday, September 27 and reveal a stunning drop in the large commercial net short positions in both gold and in Silver Futures.

Here is our graph for the commercial net short positioning for Silver Futures on the COMEX. 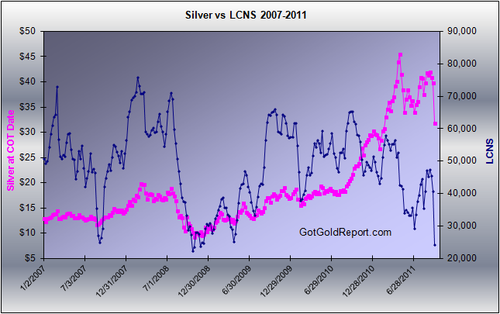 Not since November of 2008, during the heat of the 2008 Panic, has there been a smaller commercial net short position for Silver Futures.  We can say that as of last Tuesday, the largest, best funded and presumably the best informed commercial traders of Silver Futures had taken the price downdraft opportunity to very strongly reduce their short bets for the second most popular precious metal.

The last time the combined commercial traders were this "small" on the short side of Silver Futures, November 25, 2008, the price of silver then was $10.33 the ounce.  Therefore, with silver at $31.88 on Tuesday, having tested as low as $26.04 in panic liquidation selling the day before, we can say that commercial traders had about as much confidence in the Silver Price going lower as they did at $10.33 silver three years ago.

Incidentally, the relative commercial net short positioning also plunged to a very low and usually bullish 23.8% of all COMEX contracts open – the lowest LCNS:TO since October of 2008.

This is a very bullish COT report for silver.  Let's see if the market "gets" that in the days and weeks ahead.) 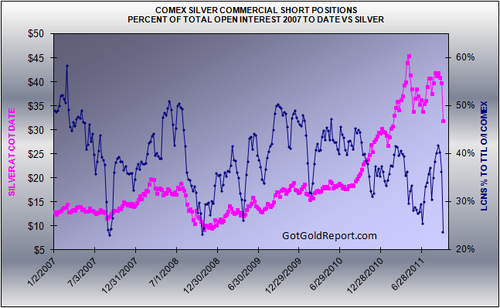 Get direct access to the spread when buying and selling Silver Bullion...