END_OF_DOCUMENT_TOKEN_TO_BE_REPLACED

A short-term analysis of the silver chart's drop and bounce...

SILVER last week thrust above the toppiness that caused so many traders to fret, only to score a fresh double-top, writes Brad Zigler at Hard Assets Investor.

Monday, bulls and bears fought to balance the spot contract between $18.19 and $18.36 an ounce after falling off from the $19.62 of Dec. 2nd and 3rd. Now bouncing, silver might seem destined to work the lower half of its volatility band for a short while at least.

And silver traders, keeping in mind silver's industrial applications, are also maintaining a watchful eye on stocks that appeared wobbly in today's early going. The metal's fortunes have piggybacked those of equities for months.

Silver's bounce at least has one thing going for it: It didn't look as overbought by speculators as gold. That may contain liquidation to some extent. At last count, about 98% of money managers' open silver positions were bullish, pretty much where they topped out seven weeks ago. Long concentration in gold is now 97% after maxing out above 99%. 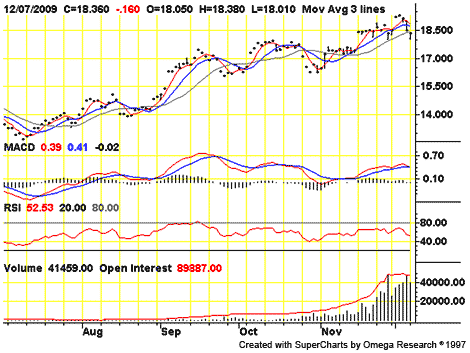 Still, silver's looking technically weak. The MACD, stochastics and RSI indicators have all turned bearish. There's cold comfort for bulls in knowing that the 50% retracement level for the July-December run-up would be $16.06 an ounce.

On the upside, at least for this short-term analysis, near-term resistance sits at $18.48 with big selling probable at Thursday's high of $19.50, corresponding to the $19.42 double-top in the spot silver price.