END_OF_DOCUMENT_TOKEN_TO_BE_REPLACED

The largest silver futures traders sold hard above $17 this month. But one group held onto a rare "long" position...

PRESSURE on the Euro has eased, the US Dollar index corrected lower, and both gold and silver have seen profit taking (especially in non-Dollar terms) as money managers apparently believe the newest "Greek Tragedy" – the fiscal situation in Greece and EU anxiety – has gone into intermission. For now, writes Gene Arensberg for the Gold Newsletter.

Meanwhile optimistic traders and investors, who can't earn much of anything with savings these days, have apparently decided owning stocks of American companies beats sitting in Treasuries or money market funds. The Big Markets cut new highs for the year this past week on the back of the largest fiscal stimuli in the history of mankind. All of it borrowed.

Does anyone else get the sense that the force feeding of the capital markets will continue until either the economy gets up a good, inflationary head of steam, or the bond vigilantes choke on all the newly issued debt?

Is that why both silver and Gold Futures in New York finished last week in minor backwardation again...with prices for near-term delivery above the price of future settlement?

Please note: This offering of the Got Gold Report was originally filed Sunday, March 14, and delivered to Gold Newsletter subscribers shortly afterwards. For more information, or to subscribe, visit the Gold Newsletter home page.

Big picture, we still note only minimal reductions of metal holdings in Gold ETFs (we have specifics in the linked charts below), but last week we had to take note of significant negative money flow from the largest silver ETF.

Amongst the producers, once again, shares of large Gold Mining companies more or less tracked with the price of gold, but we continue to see relative outperformance by smaller, less liquid and more speculative miners and explorers in the Canadian exchanges. Last week the HUI index of precious-metals stocks gave back 2.9%, but Canada's CDNX eked out a 0.7% gain, closing the week at 1,568.29 on good volume of about 1.4 billion shares.

Incidentally, the CDNX turned in a higher weekly high and low and actually closed very close to its weekly high water mark, within 3 points.

Pressure on the Euro eased somewhat, meantime, as some nervous, overly short speculative traders in Euro-cross futures headed for the exits. The US Dollar index finally rolled over and put in a convincing red week as the Euro (and even the Pound Sterling) caught a corrective bid.

We still note that in the forex market, ICE commercial traders remain uncommonly short the US Dollar index. They did reduce their collective net short DX positioning by 2,004 contracts, to 39,131 contracts net short the greenback as we detail in the linked charts below. However, that reduction in the net short positioning occurred by COT reporting Tuesday, prior to most all of the downward thrust of the buck. That suggests that at least some of the short-Euro speculative traders sniffed out the Euro reversal just in time.

Most markedly, New York Comex futures for silver were short-stopped by the "commercial", industry players last week. Comex commercial futures traders, who have added heavily to their gold net-short positioning over the past three weeks, jumped all over the short side in the silver futures market. That follows four straight weeks of higher silver prices and a roughly $2.00 advance for the second most popular precious metal in US Dollar terms.

So apparently, the largest silver futures traders felt that silver had advanced enough to fade the rally with silver metal in the USD $17s. That increase in commercial net short positioning – the group's bearish minus bullish bets – makes for a fairly large jump in the relative commercial net short positioning, up from 37.8% all the market's entire open interest to 40.8%. 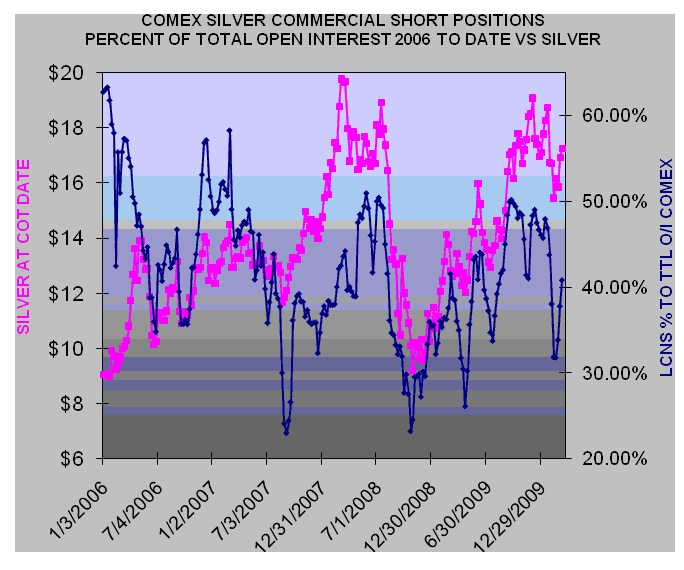 This group, which uses the futures market to create derivative products and positions for institutional as well as industry clients, reported a decrease in its small net long positioning of 2,320 contracts. Overall, the net short position of producers and swap dealers as a whole looked like this... 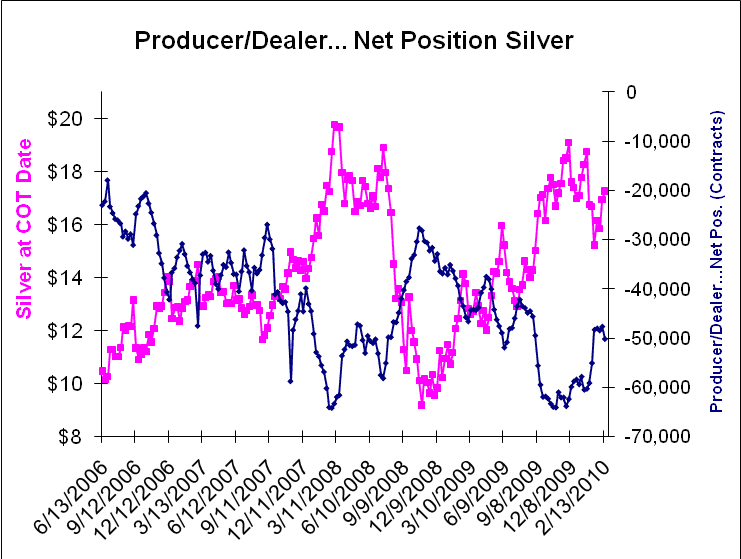 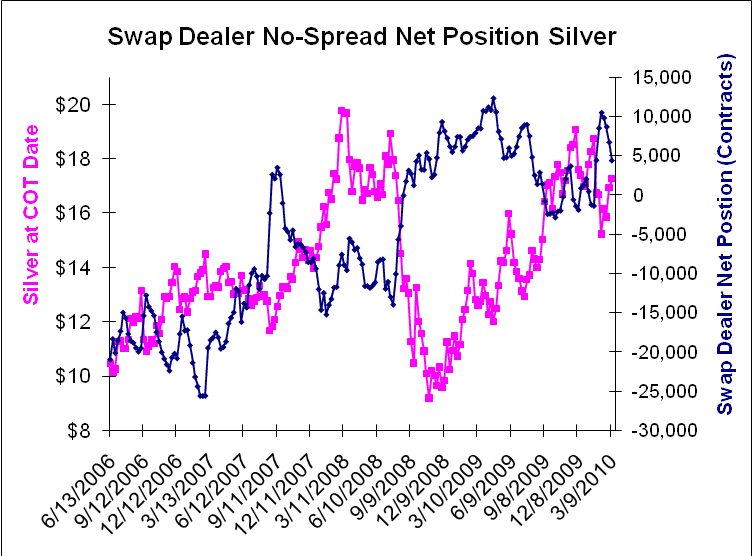 Except for most of 2009 – after silver had been crushed to unrealistically low prices by the post-Lehmans' crash – it is unusual for the commercial traders classed as swap dealers to show a net long position net of spreads.

So notice, please, that even after four straight weeks of net long reductions by the speculative non-commercial side of the market, the swap dealers remain modestly net long of silver.

Whatever they know, we once again we reiterate our longer-term view that the world will most likely continue down a path of fiat currency debasement, weakening confidence in all fiat currencies. Here at the Got Gold Report, we see the setup as long-term very bullish for Gold Bullion and extraordinarily bullish for silver looking well ahead – if the world "holds it more or less together..."

Looking to Buy Silver today? Get started with a free ounce of solid metal, only by using Silver.BullionVault....