END_OF_DOCUMENT_TOKEN_TO_BE_REPLACED

Rally in the 'industrial' precious metal...
ALTHOUGH the gold to silver ratio has tightened a bit, it remains elevated and could indicate more upside for silver, reckon McAlinden Research Partners, writing at The Gold Report.
Silver and silver miners popped in May on the back of a rebound in industrial activity around the world. Ultra-low interest rates and expectations of a weaker Dollar have compounded several political pressures that begun popping up at the end of the month.
Though the gold to silver ratio has tightened a bit, it remains elevated and could indicate more upside for silver.
Silver futures capped a gain of nearly 24% for the month of May, the largest monthly gain since 2011. The metal jumped strongly on hopes of an upturn in industrial activity as economies around the world have begun to "reopen" in the aftermath of the Covid-19 pandemic.
As the Wall Street Journal writes, silver has lagged behind gold for years and tends to be more volatile. Silver's industrial uses have held prices back in the past, but now they've provided a short-term boost.
Steve Dunn, Head of Exchange Traded Funds, Aberdeen Standard Investments, told ETF Trends that a large 50% of silver demand comes out of industry and technology sectors, followed by 25% by jewelry. The rest is driven by investments in physical silver or related ETFs.
Silver felt the pull of the downturn in industrials over the months preceding April, particularly in March, when the gold-silver ratio reached an all-time high of 126.43. As Forbes writes, in most periods of economic downturn, the gold-silver ratio tends to rise. This makes sense because gold tends to experience greater inflows as a result of investors seeking safety and industrial uses for silver slow.
No better example of this relationship in action was in March when it felt as though the entire global economy stood still. Though both gold and silver were caught up in the downward spiral of nearly every asset class, silver undeniably fell harder.
But, likewise, the gold-silver ratio tends to fall after a recessionary period. Though the US appears to be at the very bottom of its recession, many major economies in Asia and Europe have managed to stoke industrial activity, which has now brought the gold to silver ratio all the way below 95.
Additionally, non-Covid uncertainty has combined with the uptick in global economic activity to help silver close the gap – particularly toward the end of last month.
Massive protests against police brutality and systemic injustice in Minneapolis, which were derailed by looting and rioting, remain ongoing and have spilled over to nearly every major metro areas across the country and beyond. Days of heated protests and other events, combined with a dash of US-China trade tension, has created a premium for safe havens and comparatively cheap silver has seen renewed interest.
In the 3rd week of May, according to Aberdeen's Dunn, "silver ETFs added 33 million ounces which would be its best week since July 2019. The investment demand for physical silver continues to be strong. Governments and central banks continue to inject liquidity into the financial markets to offset the negative economic impact of Covid-19. With nominal rates near zero and expected to remain low, the environment for silver is attractive."
Demand for silver has been stronger than gold lately, said Commerzbank analyst Daniel Briesemann. "The silver ETFs tracked by Bloomberg have registered inflows of 2,479 [metric] tons since the beginning of April, i.e., since the start of the quarter. This has seen holdings rise by 12.3%, allowing silver to overtake gold in this respect...Inflows into silver ETFs since the start of the year now total 3,786 tons (+20%), which equates to almost two months of global silver mining production."
Loose monetary policy around the world bodes well for precious metals, said BMO Capital Markets Friday in updating its gold and silver forecasts. BMO said it was hiking its previous 2020 gold forecast by 5% to an average of $1732 an ounce for the full year. It also upped its 2021 to 2024 price expectations by 4% to 8% as well as its "long-run forecast" by 17% to $1400 an ounce from $1200 previously.
In the case of silver, BMO said it upped its 2020 forecast by 2% to a full-year average of $17.60 an ounce, with the outlooks for 2021 to 2024 increased by 2% to 6%. The bank's "long-run" price view was increased by 6% to $18.25 from $17.25 previously.
These upgrades are especially rare for BMO, as the bank's price assumption for each metal had been static since 2015.
In another move that could chart the way forward for silver and other precious metals, Goldman Sachs wrote in a note that it was shorting the Dollar, expecting the currency to weaken in the face of rising strength in foreign currencies.
Oftentimes, a weaker Dollar correlates with stronger precious metals prices. MRP highlighted this relationship a number of times, especially in regard to the effect of real rates and expansion of the monetary base, going back to March 2019 when we released our "Time for Gold" Viewpoint report. 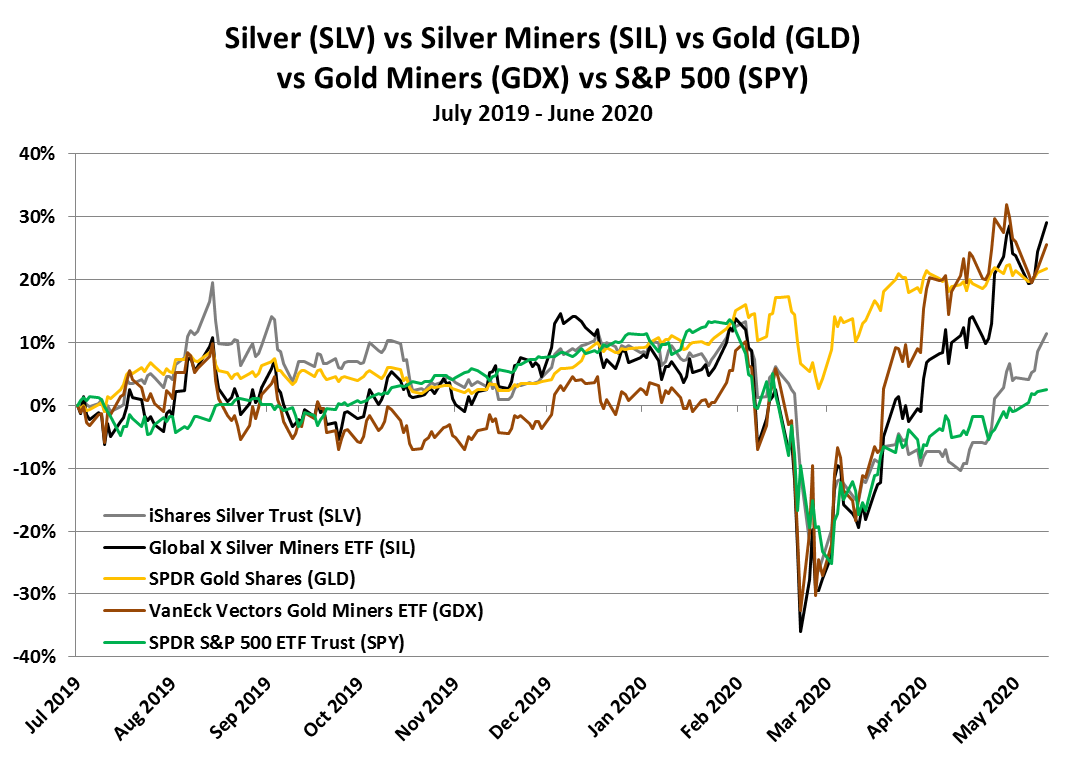 Back then, spot prices for the yellow metal were around $1300 per ounce. Since then, gold has surged to about $1740 per ounce, a gain of about 34%. Recently, real rates in the US plummeted and went negative, while multi-trillion Dollar stimulus packages have undoubtedly pushed the monetary base to new heights.
Last summer, we noticed that silver had largely missed out on that rally, becoming historically cheap when compared to gold. As a result we added LONG Silver &amp; Silver Miners to our list of themes on July 22, 2019. Since then, the iShares Silver Trust (SLV) and Global X Silver Miners ETF (SIL) have returned 11% and 29%, respectively, outperforming the S&amp;P 500's 3% over the same period. 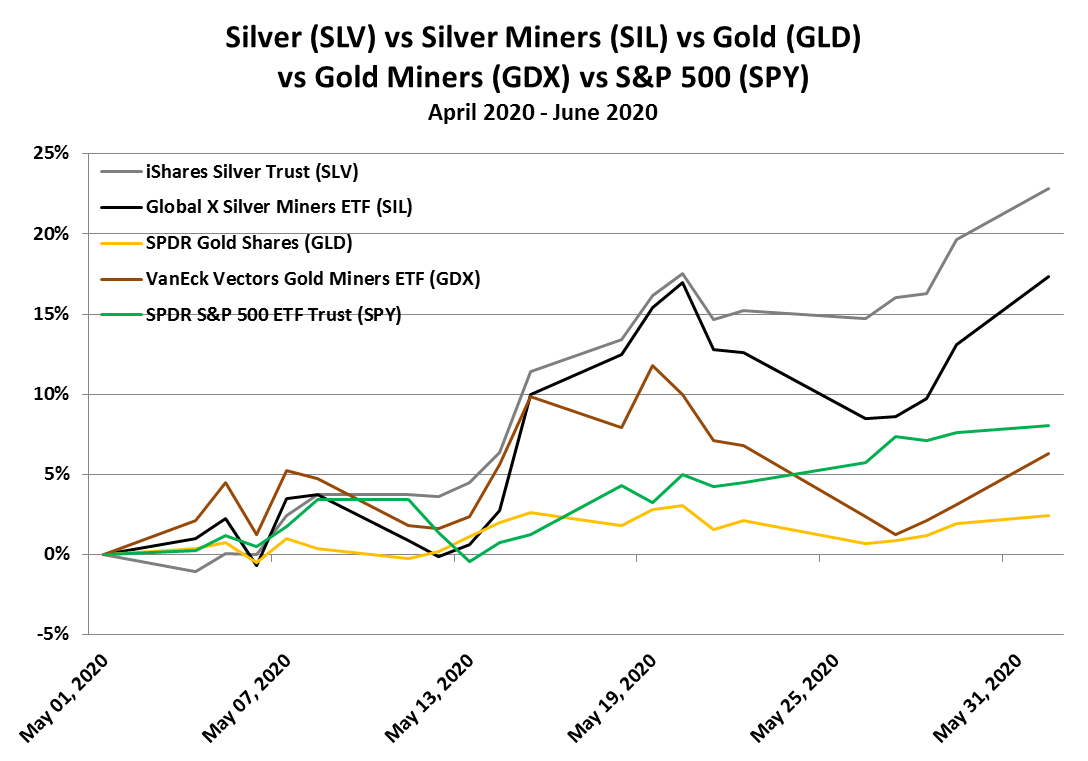 Following a broad rebound in silver prices and miner stocks, the SLV and SIL handily beat out gold and gold miner ETFs, after soaring 23% and 17% on the month. The SPDR Gold Shares (GLD) and VanEck Vectors Gold Miners ETF (GDX) rose just 2% and 6%, respectively.