END_OF_DOCUMENT_TOKEN_TO_BE_REPLACED

What's happening to the silver price as economic contraction becomes a risk...?
The COMMODITY COMPLEX has a famous sort of 'Whack-a-Mole' quality to it, writes Gary Tanashian in his Notes from the Rabbit Hole.
Do you remember back in the go-go days when it was NatGas (2005)...and then uranium (2007)...crude oil (2008)...and then a cluster of copper (2011), grains (2011) and the silver price (2011)...?
Well today none of them are doing much. Oil went up but could be topping, Copper went down but is bouncing hard, Uranium, Gas and Grains are nowhere. The result is this...

The Continuous Commodity Index (CCI) is at support but in an intermediate bear trend. A break of 550 brings on the commodity/inflation trade. That is a long way away and I have my doubts it will be able to get going any time soon.
They are already talking about the death of the Dollar again in the inflationist camp. That is because the Dollar has been dropping hard. Here is the daily chart showing that it is simply in the same Reverse Symmetrical Triangle that we used to note its risk of correction in early July. Now we note its support, with maybe a little more downside room before it finds a platform from which it can rally again. 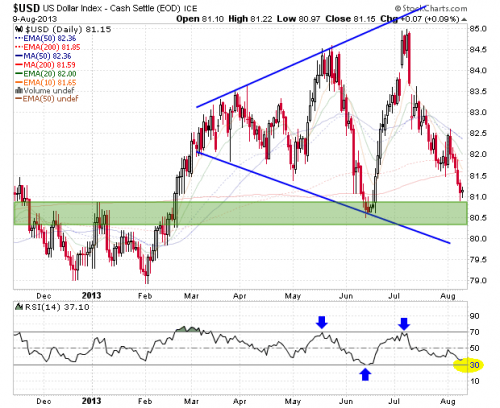 Exercise caution when an inflationist tells you about hyperinflation and the death of the Dollar. Again, we are not a gold bull and certainly not a gold stock bull because of the inflation argument. The gold sector analysis is bullish because the big picture economic contraction environment is intact and that is more likely to include a stronger Dollar than a weak one.
Bottom line? The US Dollar remains in an uptrend out of the 2011 inflation hysteria lows.

We are on a big picture economic contraction. Within this there are people on the right and left goring each other out over politics. But rabid members of each political pole suffer extreme bias and should be rejected by successful long-term market players. The Gold-CCI ratio just stair steps through time and space and does not care about any of it.
The ratio of gold prices to commodity costs went nowhere during Bush and the last inflationary cyclical bull market. Today it is biased up with huge swings in a deflationary phase during Obama and unprecedented policy making by the current Fed regime.
If Gold-CCI breaks down, we will terminate our biggest picture view. If it is bottoming here, we are good to go. Gold declined vs. commodities in the post 2008 period. That was inflationary. Gold has declined vs. commodities in the post 2011 period. But this period is not inflationary. Something has changed. 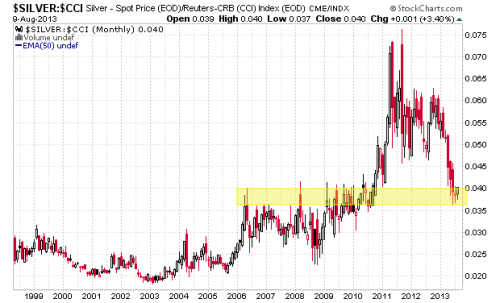 Meanwhile, we might as well add the Silver Price to CCI ratio to the mix. Because the silver price has done so much hard work in bleeding off the (inflation-fueled) excesses from 2011. Hence the silver price is at a major support zone vs. commodities and may be ready to emphasize the 'money' side of its monetary/industrial commodity cross-dress routine.
We spent the last 8 months in risk management mode (with respect to the precious metals) and now are intact and ready to capitalize on coming trends. If macro analysis tells me that the bull view is the wrong view on gold, silver and the miners we will take that bitter pill and deal in its reality.
But the thing is, the work (which goes well beyond this snippet excerpt) is signaling a major risk vs. reward setup even as legions of trend followers (see the two-year decline in Gold-CCI above) have all the intellectualized reasoning and hard evidence of economic growth they need to call " Gold's Fear and Uncertainty Trade Dead" as one blogger does.
Folks, these are the markets and they are going to wash away people with political blinders, impenetrable egos and all sorts of others who refuse to do the daily work to remain unbiased. If you would like a service that works hard to manage what is, not what preconceived notions would have us believe is, join me at NFTRH in managing what look to be big changes coming to a macro near you in the months ahead.