END_OF_DOCUMENT_TOKEN_TO_BE_REPLACED

SILVER PRICES erased the last of this spring's Covid Crisis plunge in London trade on Wednesday, very nearly recovering the US Dollar level of New Year 2020 as gold snapped 2 days of gains to fall back to last week's closing price.
Like silver, platinum prices also continued to rally for the 6th of the last 9 weeks, recovering the $850 per ounce level today – some $280 above mid-March's two-decade low – during what should have been London Platinum Week, a key event for producers, traders and users of the primarily industrial white metal and its sisters palladium and rhodium.
Ticking up near $17.60 per ounce silver prices then edged back 20 cents as New York opened, but have now recovered the 1-week plunge of $6 made as the global pandemic began to spur social and economic shutdowns in early March. 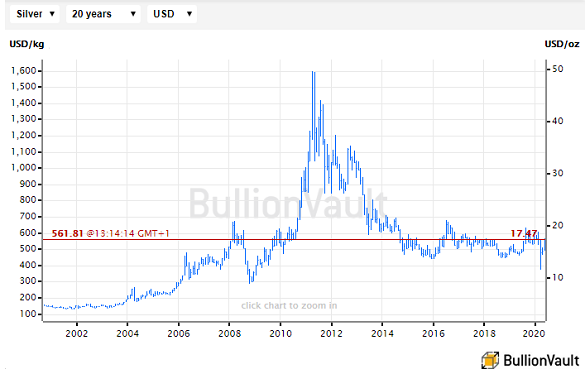 Trading back at $1743 meantime, the Dollar gold price today held over $20 per ounce below Monday's new 7.5-year high, reached just before US pharma company Moderna claimed a breakthrough in finding a vaccine against SARS-CoV-2.
Stock in Moderna (Nasdaq: MRNA) hit new lifetime highs on Monday of $80 after CEO Stéphane Bancel went on CNBC to promote what he called "very exciting data".
But "while Moderna blitzed the media," said a report from health and medicine site StatNews yesterday, "it revealed very little information – and most of what it did disclose were words, not data."
"The so called 'vaccine hope' rally in equities has weakened," Reuters quotes commodities analyst Jigar Trivedi at the Anand Rathi brokerage in Mumbai.
"Gold is back in focus with bad economic releases...[and] trade relations can take an ugly turn at any moment."
With Asian and European stock markets rising only weakly today after US President Trump threatened to pull funding from the World Health Organization permanently because of the WHO's initial response to the Covid outbreak in China, the UK government in London managed to raise a new loan through the bond market at a negative interest rate for the first time in history.
"Coming into this crisis," said bullion bank HSBC's analyst James Steel on a webinar for the London Platinum & Palladium Market hosted by specialist consultancy Metals Focus today, "all the gold in the world equated to just 2% of financial assets.
"The platinum market is just a fraction of the gold market," Steel went on, so with what he called a  "macro turn to hard assets" being displayed by relentless gold investment demand worldwide, any strong inflows to the white metal could move prices dramatically higher.
"Investor buying is gathering in [New York] futures," reckons Bruce Ikemizu, CEO of the Japanese Bullion Market Association, noting that "Comex silver's active month is July, and it shows a big departure from loco-London spot prices of almost 50 cents per ounce."
New York gold futures shot to an unheard of $100 per ounce above London physical quotes as the UK went into lockdown in late March.
That gap shrank today to $1 per ounce versus the Comex June contract and $5 against the July future price.