END_OF_DOCUMENT_TOKEN_TO_BE_REPLACED

3 proposals added to circuit breaker for silver price benchmark...
The LBMA Silver Price is being "enhanced" by its independent administrators after late January saw the new process set a global benchmark more than 4% beneath live spot-market quotes at a sudden 7-year low.
Launched in August 2014 after a request from trade body the London Bullion Market Association, this new system – administered by US financial exchange the CME Group and data distributors Thomson Reuters – beat 6 other proposals to replace the informal, bank-run Silver Fix process used daily since 1897.
Having held "two extraordinary meetings" in the week after that Silver Price benchmarking on Thursday 28 January – and enabling a "circuit breaker" the very next day to suspend auctions which "threaten...the integrity" of the benchmark or its participants – the Oversight Committee will now review the CME and Reuters' three proposals, alongside an open consultation with market users as well as UK regulator the FCA, with a view to adoption on 16 May. 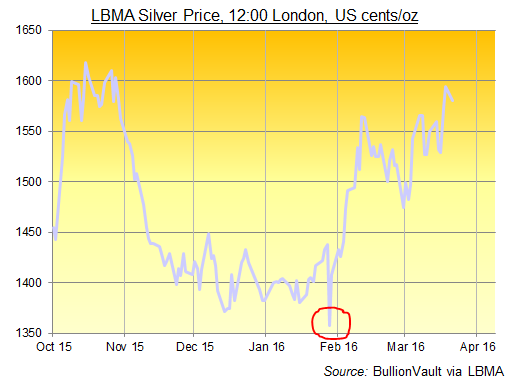 2014's search for a new process was forced by the exit of Deutsche Bank from the old fixings amid accusations of manipulation and collusion. That left just 2 participating dealers in silver's century-old benchmark, further denting perceptions of its reliability.
The new system – now a formally regulated benchmark under UK law, together with gold, crude oil and various interest rates – continues the Fixing's core method of gathering together buy and sell orders from across the market, and then seeking the one single price which matches the most business.
This process, called "tâtonnement" (literally "fumbling" in French), sees the suggested price moved higher or lower – with orders then re-submitted – until supply and demand come into balance.
"People are too scared to change their orders in the middle of the process so it got stuck," one banker said in the wake of the 28 January auction.
"In the old days, banks would step in and take positions in order to balance the process. No-one dares do that anymore, as then they have to answer to [the] compliance [department]."
To enhance the reliability of the Silver Price benchmark, the admininstrators propose widening the imbalance allowed at each auction – currently set at 300,000 ounces – if the CME feels it necessary. That imbalance will also be bought or sold equally between the participant market makers, now numbering 6 after China Construction Bank joined Canada's Toronto Dominion Bank and the London-based bullion-bank divisions of HSBC, J.P.Morgan, Scotia Bank and UBS earlier this month.
Thirdly, each auction round will go "blind", so that participants can only see the total volume of buy and sell orders after a suggested price succeeds or fails in balancing the market, rather than seeing those totals change as new orders come in or are cancelled by other participants.
"There is no limit to the number of auction rounds that can be taken to determine the rate," notes Thomson Reuters on its information page. The auction on 28 January took 29 rounds.
The LBMA Silver Price opens at 12 noon London time, with participants entering orders in response to a price suggested by the administrators based on live spot quotes.
That round closes after 30 seconds, the balance between total buy and sell orders is compared, and the suggested price is then either set as the benchmark, or raised if demand exceeds supply, or vice versa, in a new 30-second round.
The same underlying process of "trial and error" has been used to find gold's benchmark price since at least 1907. The formerly informal Fixing process provided by a small group of banks was replaced in March 2015 by an independent platform, this time administered by financial trading exchange providers ICE – a competitor of the CME Group – with each round "blind" to participants until it is complete.
Although a fraud investigation continues, the US Department of Justice last month closed an "anti-trust" probe of 3 banks for possible collusion and thus manipulation of precious metals prices, thought to include the London benchmarks.
German regulator BaFin – quoted by Bloomberg the day before Deutsche Bank quit the gold and silver Fixings in January 2014 as saying that "metals [and] currency rigging [were] worse than Libor" – closed its separate investigation last January having found "no sign" of collusion or manipulation.
"Despite lackluster trade," says Japanese news-group the Nikkei's Business Review, reporting on what it calls  an "Asian slump" in gold trading, China's Shanghai Gold Exchange "will launch its own gold price benchmark in April...aimed at drawing attention away from London, the current price-setter for gold [and] other markets."