END_OF_DOCUMENT_TOKEN_TO_BE_REPLACED

WHILE many are talking about major new bull markets in gold, silver and the miners I find it safer to set realistic goals within a still very bullish outlook, writes Gary Tanashian in his Notes from the Rabbit Hole.

After all, we became bullish in November, had to retrench due to over-bullish sentiment and fading fundamentals in February and then have been back in the bull seat since the gold stock launch as noted on June 3rd.

The point being, I have nothing to prove to you; nothing to woo you and tempt your greed impulse about. NFTRH has simply called the sector in line with its fundamentals and technicals, and that is what we continue to do as of this day. We chart 20 quality miners (+/-) each week and note short-term targets, resistance, etc. for the miners, gold and silver routinely.

The other priority is to stay on top of the still-bullish fundamentals. Most recently silver joined the party and is probably slamming our favored theme into gear, which is for it to take over leadership from gold and potentially lead the macro to a future inflationary cycle.

Easy now, that is still in the realm of potential, not yet reality. But all of this fun – and it has obviously been fun lately – takes place against a big picture that is lumbering along at its own pace.

What I like best is that due to the big picture view I can put forth a conservative 2019 plan, and it still calls for a minimum of another 70% upside for the HUI index. Within that, many of the miners we track will do much better. And within that, we have not even seen the speculative end wake up yet. Those would be the little TSX-V type penny stock bottle rockets (lottery tickets) that pull 400% rallies out of nowhere when they finally get played.

Okay, let's reel it in to the lumbering big pictures on HUI, gold and silver. As noted, there will be bumps and pullbacks along the way. Monthly charts are not preferred for managing those situations so we'll stick with the dailies and weeklies in NFTRH reports. But with the ferocity of the current rally (and the fundamentals behind it) it appears a good bet that a second leg to the impulsive 'A' leg in 2016 is underway after the beautiful consolidation that killed everyone's spirits (as it should) since 2016.

Personally, I believe Huey is going to a higher high above the 'A' high and given that there is virtually no resistance from there until the mid/upper 300s, you can see the target – perhaps to be registered by late 2019 – at the thick long-term resistance zone. At such time, assuming the fundamentals remain intact (and with some of the signals I see out there that is a big assumption) we can then gauge a "major new bull market" along with all the cheerleaders sure to be waving the golden poms. 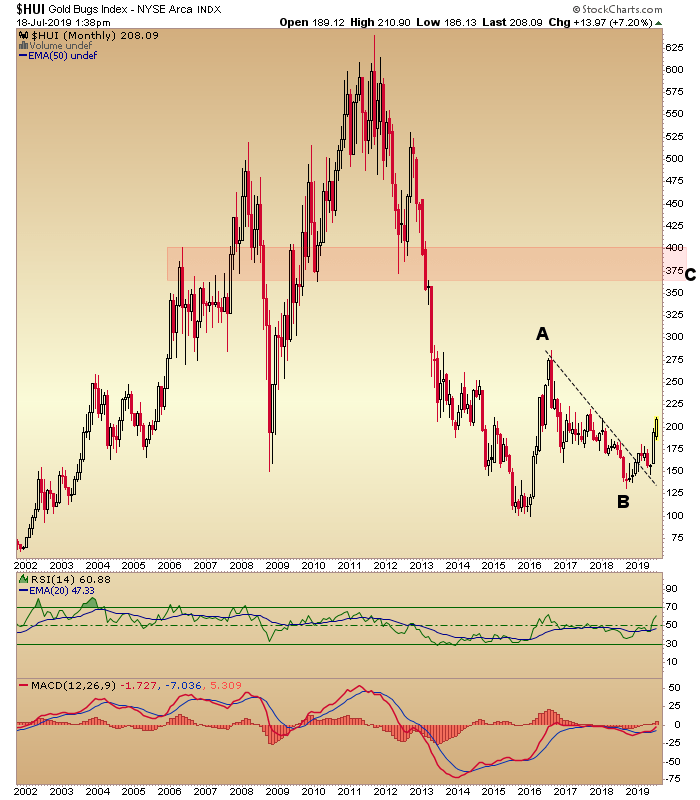 Just look at the HUI/Gold ratio. We've been tracking that handle (bull flag) routinely since 2016 and intently since it began breaking out early this year. So if you think gold is going to move, just watch the gold stocks (which remain under valued per work we do in the weekly reports and leveraged to the gold price, assuming the fundamentals remain favorable and the under valuation is to be addressed). 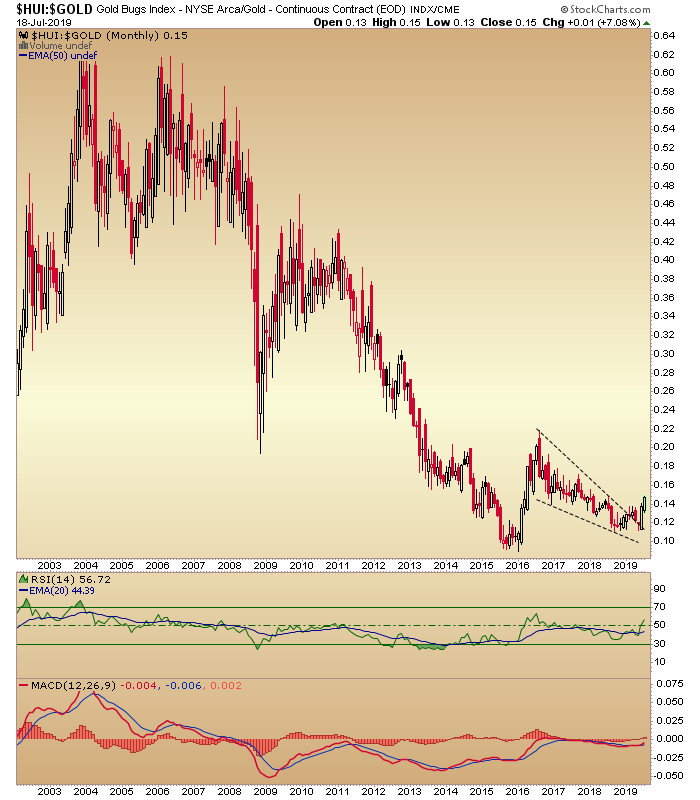 Gold jumped the creek last month and has held the (cyclical) bull market line this month. We are looking for an eventual run to the high 1500s, before talking of a major new bull market (which is also on the table, as with the gold stocks, but like the gold stocks it is not necessary to try to play swami about it now). This thing is bullish. Period.

Bottom Line: Gold did its usual job of leading the way out during the counter-cyclical and/or deflationary phase. Now it is handing off to its bros, Huey and Hiho. 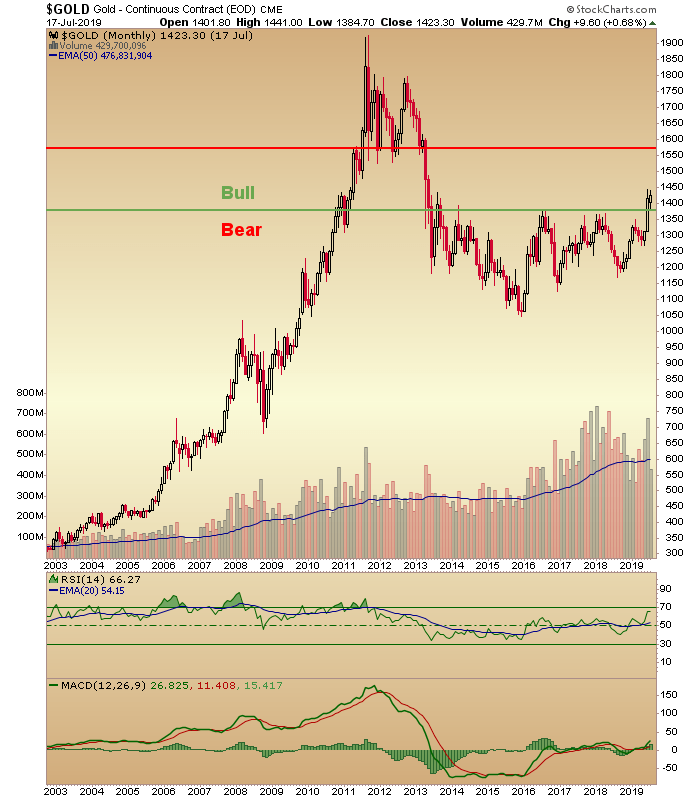 Silver, which I began buying in May (SLV for a silver price play, anyway, before branching into the silver miners) has nudged out of the post-2016 trend line and folks, do you see all that real estate between 16 (after years of a bear market silver may seem hysterical today but that is barely a blip) and 26? That 10 bucks an ounce brings us to a reasonable target and would represent a killing for silver bugs even if it's only a test of strong long-term resistance.

Bottom Line: We've been expecting silver to wake up for some time now. This week it woke up, broke the daily consolidation handle and launched, much as we'd noted the miners had done back in early June. If all goes to plan silver will out pace gold like crazy in the coming months and if so my friends, there's no fever like silver fever...provided you know when to back away from the punch bowl. 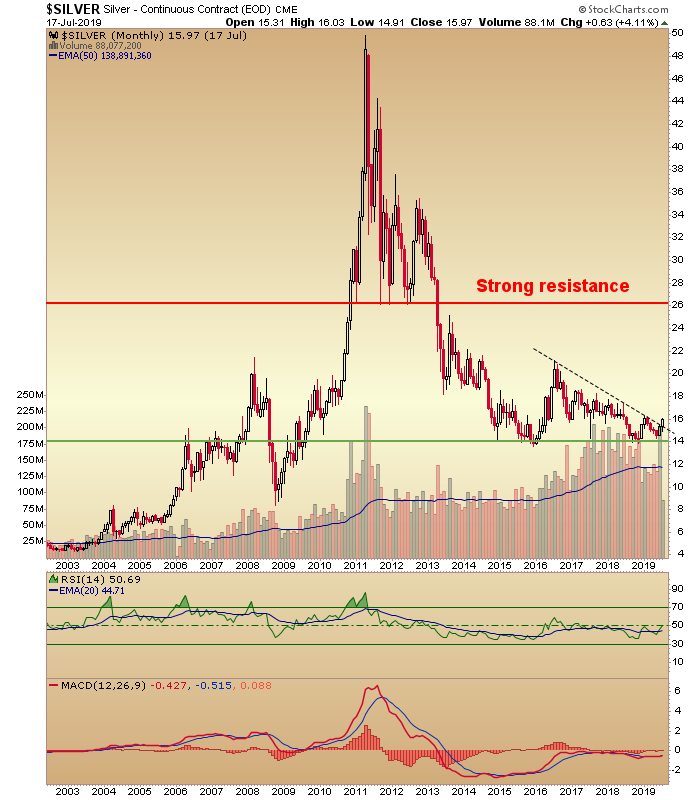 So how on earth did I manage to present a conservative big picture view for gold, silver and the miners that actually could make us a killing? Well, that owes to the intensity, endurance and ignominy of the post-2011 bear market. The bear's job was to kill the herd's spirits so that those survivors still paying attention can pick up the nuggets the herd left behind as it thundered away to greener pastures years ago.

I am not forecasting a major new bull market, but I am and have been managing a bull phase for the precious metals and with silver finally getting on its horse this week momentum (surely to be interrupted by violent pullbacks and swings) is kicking in.