END_OF_DOCUMENT_TOKEN_TO_BE_REPLACED

Silver just marked its 2011 investing mania's big peak with a 16% month-on-month jump...
SILVER INVESTING prices in the wholesale market just celebrated the 5th anniversary of their all-time top with a fresh but very familiar surge, writes Adrian Ash at BullionVault.
A key component in electronics, alloys, chemicals production and solar energy, silver closed April with a 16% gain from the end of March versus the falling US Dollar.
Spring sunshine plus super soaraway silver prices...? They were last seen together exactly 5 years ago, the last trading day of April 2011.
Perhaps you remember the last trading day of April 2011. Many silver investors will never forget it. Nor will their Profit & Loss account.
Silver prices had outrun the surge in gold prices 4 times over...jumping more than 28% from the end of March to start the long Easter Bank Holiday weekend at pretty much the highest price in history...
...just a few cents shy of the $50 per ounce level it had touched in January 1980 during the notorious Hunt brothers' attempted corner of the silver market. 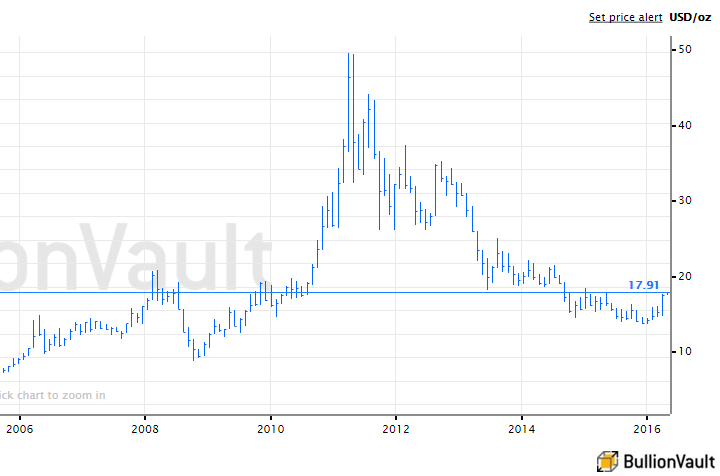 Tuesday 26 April 2011 had seen Comex silver futures contracts touch above $49 per ounce. Thursday 28 April then saw the London Silver Fix come in at $48.70 per ounce, the third highest price in that wholesale market auction's 120-year history – again, only just behind the peaks hit as the Hunt brothers' corner crested and began its collapse.
But like January 1980, the 2011 peak proved to be just that. Silver ended the year lower by one-third, and scarcely looked back...sliding and sinking and sliding again to just $13.65 in late 2015.
Now here we are, marking the end of another April with the highest monthly close on the London Silver Price since August 2014, and the sharpest 1-month rise since the crash rebound of summer 2013.
How come?

The silver surge which burst 5 years ago this week looks, on pretty much any analysis, like a mania in hindsight. It looked pretty hot back then too.
Indeed, one key reason persistently cited for joining the 2011 silver investing mania was that it was a mania – a mania crowned by celebrity tipster Jim Cramer saying that for as long as retail investors kept buying, the price would keep going up!
"Buy this bubble," in other words, "because it's a bubble." And for proof, you didn't have to look any further than the empty shelves at coin and small-bar retail shops.
Private investors happy to 'defend' their savings by immediately losing 10% or more to coin and small-bar dealing costs (oh, and 20% sales tax in Europe) found it tough to buy as much as they wanted. And they wanted a lot. Because that shortage proved that silver was about to run out!
The global wholesale market also hit a series of supply-chain blockages in spring 2011, driven not by a shortage of metal however, but by a shortage of trucks and handling staff to cope with the surge in shipping orders...driven by coin mints and bar manufacturers racing to keep up with that small-investor demand emptying the shelves at their local shops.
Here at end-April 2016, we've got a nice little silver shortage narrative in play, but it's much less urgent or widespread than the mania of 5 years ago. (It also isn't new, even if it has become news.) A bigger contrast is that, this time, it isn't private investors hoarding coins and bars who've caught the silver bug worst. Now it is professional money managers and hedge funds instead. But only using borrowed money.
Yes, key mania bellwether the Sprott Silver Trust (NYSEArca:PSLV) reached a 5.9% premium to actual silver prices at the start of April (it's a closed-end fund, so the share price can reflect demand for the shares more than the value of underlying assets it holds). That was the widest over-valuation to its silver backing's market price since mid-2012. But it was a fraction of that year's 32% peak or the 25% level seen in April 2011. (Sprott still issued more shares, as it did in 2011, destroying the premium once again but with shareholders who spot the loss of trust-fund value telling themselves it's like " taking one for the team...[for] the greater good" apparently.) Nor is spring 2016's silver surge due to money managers using more efficient exchange-traded proxies like the giant iShares Silver Trust (NYSEArca:SLV). Although back to 2014 levels, it needed to add only 137 tonnes this month – barely 1.3% extra – to meet expanded demand for its shares.
No, the big silver mania this time is gripping hedge funds and other hot-money speculators using leverage to boost their gains – and to size up their risk as well, of course – in Comex silver futures and options. 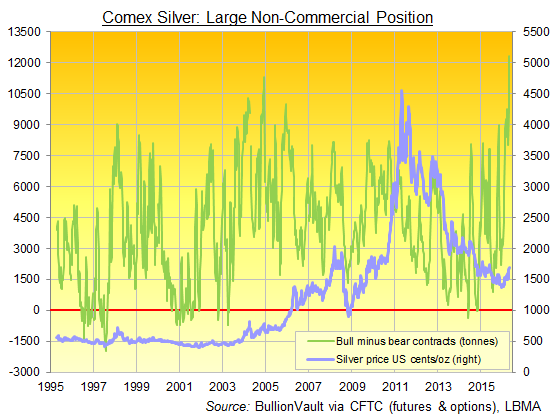 Unlike buying metal outright, or tracking its cash price with the SLV trust, the silver contracts traded on the CME Group's Comex exchange only require a small downpayment. Getting all the price move for only a fraction of the initial cost is the whole point.
Miners, refiners and other supply-chain players use futures and options to hedge their exposure to falling prices. By selling it 'short', they will at least get a profit on that Comex trade to help cover any financial loss made on the actual metal they're mining, processing, shipping or holding in inventory.
On the other side of the trade, no one speculating in Comex silver contracts actually wants silver. They'd buy the metal instead if they did. And betting on the direction of prices, non-industry players had this month already built the largest "net long" position (of bullish minus bearish bets as a group) on record. And unlike gold speculators, they also refused to back off ahead of last Wednesday's US Fed announcement on interest rates.
All told, as of reporting day Tuesday, the 'Managed Money' category of traders alone held a net bullish bet equivalent to 10,920 tonnes of silver – a massive 40% of annual world mining output. The notional value of that net betting reached $5.95 billion, the largest size since end-2012, when silver prices were trading almost twice current levels, up at $35 per ounce.
What happens to silver if all those bullish Comex traders demand delivery of metal when their contracts come due? They won't, because they don't want silver. They would simply buy the metal if they did. Nor do they want to spend all the money needed to get it (if they can afford it). Because to get the physical silver promised by their Comex contracts, they'd have to stump up the rest of the cash needed to buy it – on top of the small downpayment already made (known as 'initial margin').
So this speculation isn't, in truth, about silver. It's about silver prices, and what they represent or signal. And that, with the US Fed standing pat on interest rates this week, has nothing to do with silver's myriad industrial uses, not even the huge jump in China's solar panel installations.
Silver has jumped because the Fed has failed to follow-up its December rate rise – something which solid and persistent investing demand says longer-term savers always expected, even before the hot money started building towards its record-high net long betting earlier in 2016.
Used as money everywhere throughout history, silver is still seized on as a store of value when it matters. But its price is also very volatile. Gold on crack, if you like. Outside the Comex, it's nowhere near a mania today. Not yet. And investors wanting to take a position can simply buy physical silver at low cost as their own property. You don't need wide dealing spreads on coins, complex trust-fund structures, or leveraged bets.
I mean, Isn't 16% inside one month a fast enough gain as it is?