END_OF_DOCUMENT_TOKEN_TO_BE_REPLACED

Record New Year for 1st-time bullion buying runs into February...
THIS YEAR's record start for new precious-metals investing continued last month here at BullionVault, writes Adrian Ash, beating every previous February for first-time users on a surge of silver demand prompted by social media.
Asked how they first found BullionVault – the global market leader for securely stored precious metals held ready for instant resale 24/7 – some 11.5% of new users in 2021 so far have cited social media, up from 3.5% last year.
With other sources holding steady, that has helped drive the strongest-ever start to a year since BullionVault launched in 2005, setting new January and then February records in terms of first-time users.
Word of mouth has always been a strong source of new business at BullionVault, and social media is really just an extension of that. Lockdown is driving people to discuss ideas online while also giving them more time to research and take charge of their personal finances themselves.
Older investors may of course sneer at TikTok creators and WSB posts on Reddit, but they aren't so different from late '90s chatrooms or investment blogs during the financial crisis. And social media is now helping prompt a new wave of investors to consider the value and risks of adding precious metals to their portfolios.
Private investors aren't alone or early in using social media to find ideas and develop their thinking. Far from it. A study in 2015 in fact found that some 200 out of 250 institutional investors surveyed said they "frequently" used social media platforms, and one-third then "confirmed that the information they have consumed through social media has, in fact, impacted their investment decision process."
But few tweets or LinkedIn posts can have had the impact of start-February 2021's posts on Reddit's WallStreetBets forum urging people to buy silver and spike the price higher.
With the metal surging 20% higher inside a week to touch $30 per ounce, Google Trends says that the number of English-language searches to "buy silver" worldwide overtook "buy gold" for the first time since spring 2011, when silver prices jumped to touch $50 per ounce for only the second time ever. 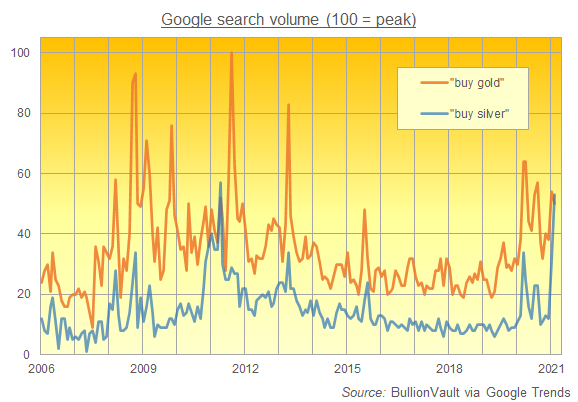 Last month's new users on BullionVault also preferred the more industrially useful grey metal over its yellow 'safe haven' cousin, with only 21.5% buying just gold against the typical average of 34.7% while a massive 47.4% bought just silver – more than four times the proportion of 11.2% seen across BullionVault's existing clientbase.
Silver in February set its highest month-average price since March 2013 at $27.35 per ounce, erasing the last of that spring's steep crash.
Gold in contrast recorded its lowest month-average since June 2020 at $1808, and set its lowest since March 2020 in British Pounds and Euros at £1304 and €1495.
Nevertheless, the last year has now seen gold average $1812 per ounce, setting a fresh record high 12-month average every month since October.
BullionVault's Gold Investor Index has also now set a record-high average across the last 12 months, reading 59.9 since the Covid Crisis began last March and beating the 12 months to May 2012 – peak of the global financial crisis – by 0.2 points. 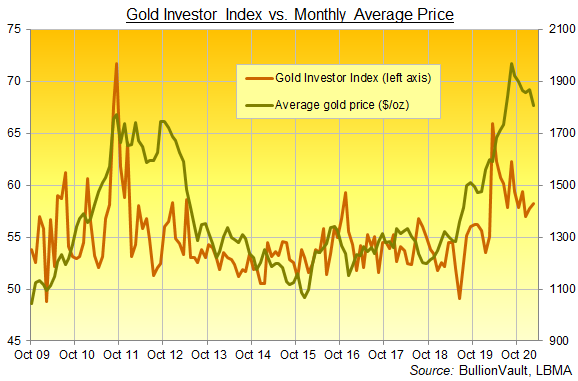 February's drop in gold prices saw the Gold Investor Index – a unique measure of private-investor behaviour in the precious metal, tracking the balance of buyers over sellers each month – rise to its highest since November at 58.2, up 0.7 points from January.
A reading of 50.0 would signal that the number of people buying gold exactly matched the number choosing to sell. It set an 8.5-year high of 65.9 as the Covid Crisis began last March.
Gold investing by weight meantime saw a net inflow this February for the 13th consecutive month, albeit barely a third of the previous 12-month average (36.5%) at 0.2 tonnes worth $12.8m (£9.2m, €10.6m, ¥1.3bn).
That took total client gold holdings, all stored and insured in specialist vaults in each user's choice of London, New York, Singapore, Toronto or – most popular – Zurich to a new record of 46.4 tonnes worth $2.6 billion (£1.8bn, €2.1bn, ¥277bn).
Silver demand beat gold, the strongest by value since last May at $22.7m (£16.3m, €18.7m, ¥2.4bn) with the 7th consecutive month of net inflows marking the heaviest since October at 25.8 tonnes.
That took client holdings up to a new record of 1,166 tonnes worth $1.0 billion (£718m, €826m, ¥106bn).
The Silver Investor Index meantime rose 1.2 points to its strongest since September at 61.0, also setting a new record 12-month average at 60.9.
It set a series high of 75.1 as private investors raced to buy the metal on last March's crash to the cheapest since New Year 2009. 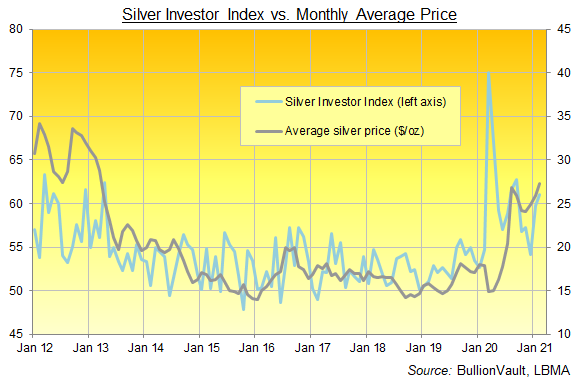 Net demand among BullionVault users for platinum was also positive in February, marking the first inflows since November and erasing over one-third (37.5%) of the previous 2 months' profit-taking to add 76 kilograms worth $3.0m (£2.1m, €2.4m, ¥314m) and take total client holdings back up to 1.7 tonnes worth $69m (£49m, €57m, ¥7bn).
Used in autocatalysts, chemicals and glass production and also hard-disk drives, the price of platinum joined silver in surging to multi-year highs last month, reaching its highest since October 2014 above $1300 per ounce.
Looking ahead, silver and platinum prices have been rising for the same reason that gold is falling. Betting on a swift and steep economic recovery is spilling over into commodity markets, and in contrast to the 'safe haven' precious metal, both silver and platinum are incredibly useful to industry.
Productive use accounts for less than 10% of gold's annual end-user demand, compared with around 60% for the white precious metals. While that helps insulate gold from the business cycle, making it more appealing as a store of value when economic activity falls, it makes silver and platinum more attractive when the economy grows.
Attachments: