END_OF_DOCUMENT_TOKEN_TO_BE_REPLACED

Silver struggling to rally vs. gold price...
The INTERPLAY between gold and silver is a critical component to understanding what is out ahead, writes Gary Tanashian in his Notes from the Rabbit Hole.
Gold and silver matter to understanding whether long-term Treasury yields will rise and, if they rise, whether it will be due to inflationary pressures. It is a critical component to understanding whether cyclical commodities and other aspects of a greater inflation/reflation trade will finally break existing downtrends.
We noted in a recent post that the 30-year US T-bond yield needs to climb above 2.2% to even think of hinting toward a temporary inflation trade. The chart from that post shows that while the Continuum is of a long, deflationary structure, the periodic pings upward to the (monthly EMA 100) limiter often represent times of cyclical inflationary bursts.
The 30 year yield now stands at 2.15%.
Personally, it was a little difficult not to buy in (other than for a couple of 'bounce' trades) to the prospect of the global inflation that central banks are trying to summon. But we have routinely shown intact downtrends in the inflatables. So it was a case of 'break the trends and we'll talk inflation trade'.
And so here we are, in the midst of a precious metals correction updating not only the key downside supports/targets (each week in NFTRH) but also gauging the interplay of the two precious metals.
Why? Because while this chart is technically trying to establish a new uptrend in silver (more relative cyclical commodity characteristics) vs. Gold (more relative counter-cyclical, non-commodity characteristics), this monthly chart has been advising patience with the process. 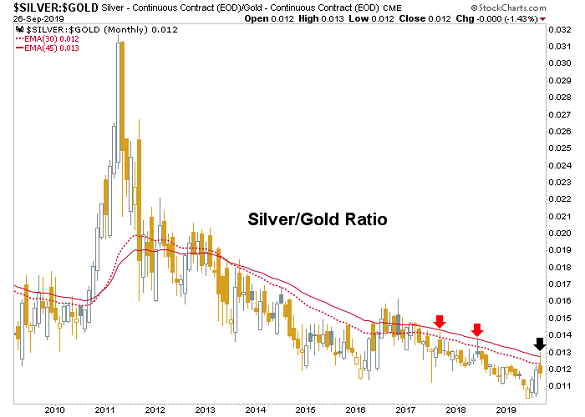 There are many other signals to watch for aside from silver's interplay to gold. These include the above-noted long-term Treasury yields, inflation expectations gauges like the 10 and 5-year Inflation Breakevens, Yield Curves, etc.
But among the simplest are plain price charts. Commodities are generally locked in daily chart downtrends and Silver/Gold is trying to break a still intact long-term downtrend.
Counter-intuitively, if I am a deflationist (which I must ultimately be given the as yet unaltered Continuum over decades interrupted by periodic inflationary bursts) I look forward to a lack of inflation signals in the macro markets.
And if I am a gold stock bull (which I must also be given my minority view among a majority of inflation-centric gold bugs of gold mining counter-cyclicality) then I look forward to finding a bottom in the current correction because it could be the best buy in what could be a longer bull market, as opposed to the likes of the 2016 burst that ultimately failed as cyclical and inflationary forces took over by the middle of that year.
Gold could merely out-perform cyclical assets in a deflationary macro, while the miners would leverage that out-performance. It's the same drum we've been beating against the constant inflationary gold bug "death of the Dollar" type promotions for the last 15 years. The miners rose into 2008 despite rapidly degrading fundamentals and over valuation (as gold under performed cyclical commodities).
Today, despite the correction – or what we can call the running of the inflationists – the value proposition for the miners will become excellent once again if the macro stays as is and stock markets take a Q4 correction as currently expected. 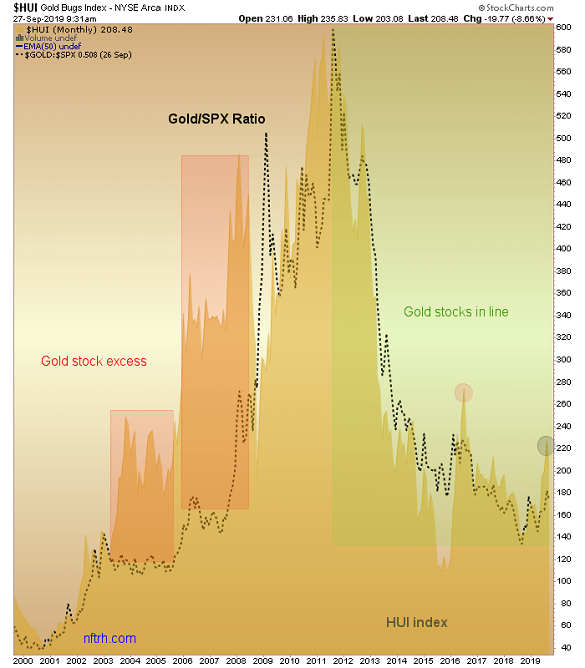 Here is a final chart we've been using in NFTRH to gauge how the precious-metals miner HUI stock index got ahead of itself in relation to another macro indicator, Gold/SPX.
The black dot represents a similar condition to the 2016 top. The macro caught a second wind and that was all for the gold miner rally.
However, if the macro does not shift cyclical/inflationary as it did in 2016 you are going to see an epic buy on the gold sector at the bottom of this correction.
Meanwhile, it's time to shake out the inflationistas and the cheerleading in precious.