END_OF_DOCUMENT_TOKEN_TO_BE_REPLACED

Why are silver ETF holdings rising while gold ETFs are seeing outflows...?

TWO WEEKS ago we looked at the difference between gold ETF outflows vs. physical gold purchases, and showed that most sales were coming from the former while aggressive buying was coming from the latter, writes Jeff Clark, senior precious metals analyst at Casey Research.

This week we examined the same data for silver – and discovered a rather striking trend. Not only are silver ETFs seeing no net outflows, their holdings are increasing. Bearish investors who treat the two precious metals as being the same, interchangeable thing, and sell silver along with gold are at risk of missing the boat.

Here's how holdings in SLV, the world's largest silver ETF, compare to those of GLD... 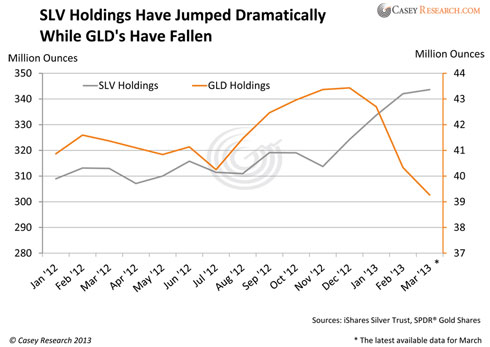 It's not just SLV. As a group, silver exchange-traded products (ETPs) have seen their holdings rise for four consecutive months.

Why the stark divergence between the two precious-metals funds?

As most readers know, silver has a dual nature, serving as both a precious metal and an industrial metal. As a precious metal, it's a store of value like gold – but since roughly half of its use is devoted to various industrial applications, its performance has a strong correlation to economic growth. And since most mainstream analysts are bullish on the global economy, the current surge in silver ETFs is likely a result of this optimism. After all, if you see economic recovery ahead, industrial demand for the metal will grow and the price would be expected to rise.

Further, these massive inflows are occurring at a time when the silver price is mostly flat, whereas the previous peak in holdings took place when the price was soaring (spring 2011). Here's a picture of SLV holdings since January 2012, along with the silver price. 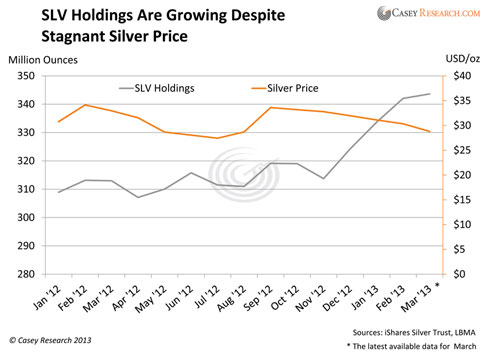 What's interesting is that the increase in SLV holdings has not had a significant impact on silver's price – yet. Since the price usually receives a boost when industries start buying more of it, many of these "paper" buyers are likely adding silver in anticipation of economic recovery, the very reason others are selling gold.

As with gold, buyers of physical silver tend to have a long-term investment horizon and buy mostly from a currency standpoint. With prices near the bottom of their 22-month range, many investors continue to see opportunity: January sales of American Eagle silver bullion coins spiked to an all-time record of 7.5 Moz, and February's demand was 3.4 Moz, up 126% from last February's sales of 1.5 Moz. Cumulative silver coin demand for the first two months of this year already hit 10.87 Moz, a full third of total coin sales in 2012.

You can see that silver is being sought by both paper and physical buyers. 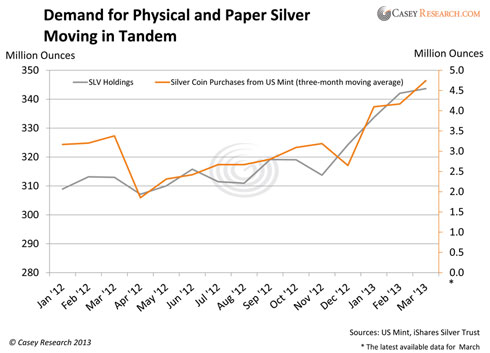 Whether it's mainstream investors buying in anticipation of economic recovery or physical buyers loading up due to currency concerns, investors collectively see big potential for silver.

It's a simplistic conclusion but not necessarily inaccurate: silver rises if the economy improves and industrial demand grows – or it rises if the world's major currencies continue to be debased, regardless of whether the economy is on the mend. Two different reasons, the same investment solution.

What if we get both outcomes: a robust economy and high inflation? That, of course, would be music to the ears of silver owners... the demand from industry strains supply, while bullion owners refuse to sell. Prices would go ballistic.

Does this mean silver is a no-lose proposition? Of course not. No investment comes without risk. An outright depression would be destructive to industrial demand. Roughly two-thirds of silver is used in industry and jewelry, so Doug Casey's Greater Depression could severely impact the biggest portions of current demand. The same events would increase monetary demand for silver, but the two trends may not have equal weight on the price of silver at the same time. We thus wouldn't make silver our sole investment, but we see a lot of upside in the metal under current market conditions.

Thinking of buying silver? Get the lowest price possible and pay no VAT sales tax when you open an account with BullionVault...