END_OF_DOCUMENT_TOKEN_TO_BE_REPLACED

Gold Investor Index also falls as prices jump...
GOLD PRICES grabbed the headlines last month, rising at the fastest pace in Dollar terms since May 2021, writes Adrian Ash at world-leading marketplace BullionVault.
But the price of silver bullion really motored, jumping 12.7% from the end of October as bearish speculators betting the precious metal would fall were forced into short-covering on Comex futures and options bets.
Net gain to anyone buying silver coins?
Minus 20% or worse, depending on just how wide your retailer's spread runs between buy and sell prices, plus any VAT sales tax – charged at 19% in the Eurozone and 20% in the UK – which you won't get back on trying to take profit.
Luckily, there is a far simpler, safer and more efficient route chosen by people actually wanting to defend or even make money. And among those people, the steepest 1-month rise in silver for nearly 2 years just saw net profit-taking by BullionVault users for the first time since prices spiked on Russia's invasion of Ukraine in March.
It was also the first time since the price jumped more than 14% on the UK's Brexit referendum shock of June 2016 that the number of people buying the precious metal was beaten by the number people selling.
Because they could. At a profit. 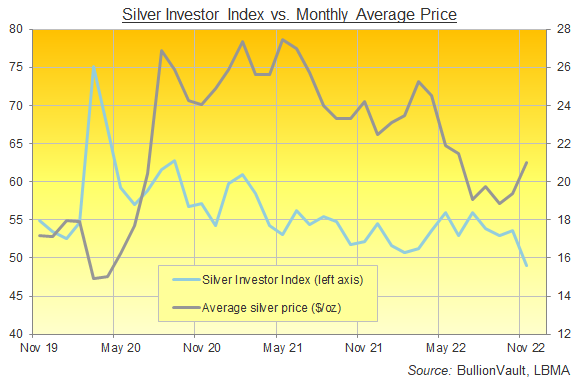 Buying the dips and exploiting the spikes in precious metals really depends on how you access the market.
Trading in and out of gold, silver, platinum or palladium as prices fall or rise is not only feasible but increasingly attractive provided you strip out VAT sales tax and escape double-digit dealing spreads.
That's why the number of silver sellers on BullionVault rose 39.6% last month from October's figure to reach the most since March.
In response to silver's steep price rise, the number of buyers in contrast fell 41.1% across last month, the sharpest drop since May 2013 and down to the fewest since May 2019.
Together, that saw the Silver Investor Index – a unique measure of self-directed decisions in precious metals – record its sharpest decline since October 2020, down 4.5 points to 49.0.
A reading above 50.0 would indicate a perfect balance between the number of people buying with those choosing to sell. November 2022 marked the first sub-50 reading since June 2016. 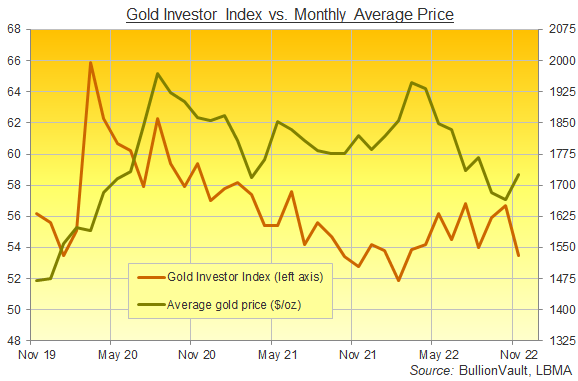 The Gold Investor Index also fell as bullion prices jumped in November, dropping at its fastest pace since summer last year as gold priced in Dollars made its steepest monthly climb for 18 months.
Gold bullion ended November 7.0% higher than it began as the US currency retreated from its 2022 surge on the FX market.
That marked gold's sharpest rise since May 2021, with month-average prices also rising, up 3.7%.
In response, the number of people buying vaulted gold bullion fell 27.0% from October's count, nearly matching the steepest drop of the past 18 months. The number of sellers, in contrast, rose by 27.2%, its steepest rise since February.
Together that saw the Gold Investor Index, a unique measure of behaviour among precious-metal owners, make its steepest drop since July 2021, down 3.2 points to 53.5, the lowest reading in 9 months.
Again, a reading above 50.0 would indicate a perfect balance between the number of people buying with those choosing to sell.
By weight, gold holdings among BullionVault users were virtually unchanged, expanding by just 36 kilograms in November to set a new record above 48.0 tonnes.
Together with gold's month-end rally in terms of the weakening Dollar, that took the total value of BullionVault client gold holdings above $2.7 billion, the highest in 5 months.
Silver holdings meanwhile shrank by 0.4%, the first net outflow in 8 months, with customers selling 5.3 tonnes from October's month-end record of 1,267.3 tonnes.
Even so, that still left BullionVault users' silver holdings at their highest Dollar value since April at $875m as the Dollar price of silver rose 8.5% across November, the steepest month-average gain since August 2020.
What comes next?
Rising interest rates have capped bullion demand and prices this year, offsetting the impact of inflation and geopolitics. But consumer demand has already rebounded, and stagflation in 2023 looks likely to see central bankers losing their nerve over further steep rate hikes.
Gold's jewellery demand has now returned to pre-Covid levels but at prices $500 higher. Silver's long-term fundamentals continue to brighten, with growing demand especially from green energy tech facing weak or flat mine supply.
As it is, the market's current levels mask huge price moves across 2022, putting precious metals back to unchanged from New Year despite gold hitting all-time highs on Russia's invasion of Ukraine and silver swinging 30% top to bottom.
And for now, the rebound in gold and silver got ahead of itself, with short-covering by 'hot money' traders in Comex futures and options spiking prices too quickly for physical buyers to follow the market higher just yet, offering a quick profit to more active investors.
Attachments: