END_OF_DOCUMENT_TOKEN_TO_BE_REPLACED

April 2011 saw silver prices double from 6 months before. Why, and what happened next...?
SILVER PRICES hit $50 three years ago this week, writes Miguel Perez-Santalla at BullionVault.
It was on April 25, 2011 that silver traded $49.80 per ounce in the New York spot market. That means silver traded $50 somewhere. There was a lot of business going on at that time, but after holding above $49 for the rest of that week, silver prices began to retreat. Fast.
One of the factors that many traders were looking at was the Gold/Silver Ratio. Some believed that silver was much undervalued versus gold, and would recover its historical price parity of about 16 ounces of silver per ounce of gold.
So even though silver hadn't been so expensive in terms of gold for 28 years, and even though Dollar prices had doubled inside 6 months, some traders felt the move wouldn't be complete unless silver traded above the $50 price level it had hit in 1980.
The silver market environment of 2011's run to $50 per ounce was, however, very different to that of 1980. The principal driver back then was the continued inflation in consumer prices, plus the attempt by Nelson Bunker Hunt and his partners to corner the silver market – an attempt eventually brought to an end by efforts of the Federal Reserve Bank and certain members of the Commodities Exchange.
Thirty years later the global economy again faced serious concerns. Not only was the US economy still reeling from the mortgage crisis and 2008 Lehman Brothers collapse. Now the Eurozone faced break-up as Greece, Ireland, Portugal, Italy and Spain all reported serious problems with their finances.
In the United States confidence in the economy continued at record lows. The news out of Europe only heightened concerns of another financial crisis. Then the Fed announced another round of Quantitative Easing beginning in November 2010. Silver coin sales by the US Mint hit a monthly record, surpassed only by early 2011's surge in private-investor demand. Because this new QE meant printing more Dollars (or rather, their "electronic equivalent" as then Fed chair Ben Bernanke had said). So in the minds of many investors the Dollar was under the gun. Seeking safe-haven assets, likely to hold or grow their real value during a prolonged inflation, became of paramount importance.
Internal to the silver market, meantime, there were reports that seemed to support a bullish long-term view on silver's industrial demand. The photovoltaic industry for one began consuming silver in much larger quantities than in previous years. Solar panel production starts with silver paste, and that requires a finer grade of silver than the main wholesale market trades. As the sector's growing demand sucked in these 0.9999 fine bars, it drew a lot of attention. Because while there was no shortage of the more common 0.999 bars, there was a shortage of immediate supply of this higher purity. And because of the growing demand, and the coincidental rise in the silver price, the story stuck.
Then vice-president of sales at Heraeus Precious Metals Management in New York, I was asked to debunk this myth – the idea that the photo-voltaic industry was driving the silver price higher – for clients starting in January 2011. The bottom line was that solar-panel demand was only beginning to fill the major hole left in silver offtake by the ever-shrinking photographic industry, which had previously been the world's largest consumer of silver for many decades.
Still, the physical supply anomaly between standard wholesale bars and the finer .9999 metal did give the impression that stockpiles were tight. Additionally, as that story snowballed, the incredible private-investor demand for small bars and coins in silver due to the economic global crisis caused immediately-available retail products to go to higher premiums than product for later delivery. That carried into the futures market in February 2011.
Why? When demand exceeds expectations in physical goods, often it is difficult for the manufacturers to meet new customer orders quickly. If that makes supply become sporadic, it gives the impression that there is a shortage of raw material, when in reality there is only a shortage of product. But as silver prices headed for $50 per ounce 3 years ago, the idea of vanishing silver supplies – rather than just tight supply of small bars or coin – was frequently promoted by many retail distributors as part of their sales pitch.
Backwardation is when the price of silver in a future month is cheaper than the "spot" or immediate month. Silver futures normally trade in the inverse position, because the seller of metal has to pay the costs to carry the inventory until settlement, and those costs are reflected in the price. So this early 2011 backwardation, suggesting a lack of immediately available silver, put another feather in the cap of silver bulls.
Let's take a quick look however at the actual statistics of physical demand versus supply of silver. The photovoltaic industry did experience large growth from 2008 to 2011. In fact, in that time period the industry grew its silver demand by 338% according to Thomson Reuters GFMS. This of course was astronomical for the solar industry. But for silver demand more broadly, it barely registered as a fundamental market driver. 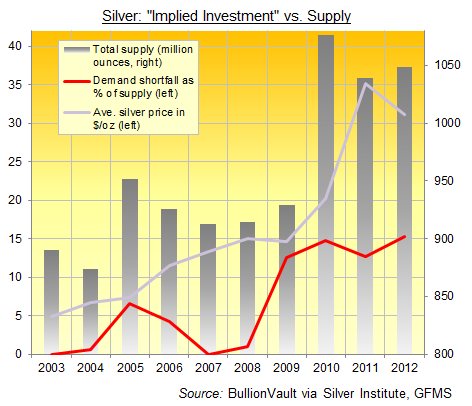 Looking at a chart of supply and demand for silver from 2003 to 2012 we can see that supply met demand annually. There was never any shortage. In fact, the silver market was in a significant surplus 6 times over that decade.
The leading data providers in the silver market, Thomson Reuters GFMS, used to call this "implied investment". It was, as they said, "the residual" between the supply and demand data they collected. Meaning it was a balancing item, included so that supply and demand matched, whatever the shortfall or excess recorded on the visible numbers.
GFMS are now calling a spade a spade, starting with their new Gold Survey 2014. Their new Silver Survey, due for launch next month through the Washington-based Silver Institute, will surely make the same change. And as you can see, if we view that old balancing item of "implied investment" as a market surplus or deficit each year, the excess of supplied metal over visible demand ran near 15% in each of 2010-2012.
Yes, investment demand grew along with silver demand from the photovoltaic industry. But even the combination of the two did not exceed the growth in supply, which constantly increased because of the higher prices in the marketplace. Miners and scrap collectors were more than happy to increase supplies.
So like the ancient Roman writer Phaedrus said, "Things are not always what they seem; the first appearance deceives many." And silver's seeming shortage in spring 2011 – which did so much to spur extra investment, especially from private households caught up by calls to "Buy now! Time is running out quickly!" – was in truth no such thing.
In the same chart above, you will note that fabrication demand decreased in 2012. This is no surprise considering the volatility and the high price of silver in 2011. This caused what is called "thrifting" in the industrial sector.
Thrifting is what manufacturers do when a commodity used to produce their product exceeds expected costs, or becomes too difficult to manage due to price volatility. To prevent losses due to wild market prices, the manufacturers begin to invest money in attempting to use the least amount possible of the offending commodity. In this case that offending commodity was silver. And the thrifting provoked by the high silver prices of early 2011...in good part provoked by that phantom shortage...led to lower industrial demand, as we see here in Part 2 looking at silver's April 2011 spike and drop...