END_OF_DOCUMENT_TOKEN_TO_BE_REPLACED

What's behind the idea that the ratio of gold to silver prices is set to tumble...?

THERE'S a lot of talk on the web about silver being significantly undervalued versus gold, writes Miguel Perez-Santalla at BullionVault in New York. The ratio of gold to silver prices, in other words, is set to fall.

Many commentators and analysts online like to point to this historical relationship between gold and silver. People even comment on the gold/silver ratio as far back as thousands of years ago. Silver was likely much closer in value to gold than it is today, perhaps at a ratio of 3:1 in medieval Japan and 2:1 in ancient Egypt, thanks to the lack of domestic silver mines in those kingdoms.

In fact, silver may have been more valuable than gold for long stretches of history, and not only in those places where supply was scarce. Because people could source greater amounts of silver, they learned how to make more useful objects from it. Both silver and gold have long been used abundantly for ornamentation and as a thing of beauty in homes, temples and palaces. As jewelry their beauty was very much esteemed.

However, once gold was found in increasing abundance and man's metallurgical skills improved, gold soon overtook silver as the more highly prized metal. One of the main reasons is gold's ability to be beaten and stretched to great lengths while still maintaining its beauty. But the most important of its properties is that it does not tarnish. In a thing of art and beauty this is an important factor, and one that still to this day maintains gold's lead over silver for value in the jewelry industry.

Getting back to the ratio, it simply take the price of gold and divides it by the price of silver. So today that would be $1650 ÷ $31 = 53.22. Which is pretty much right on its 45-year average. But starting from that much lower base of ancient history, as silver and gold coins spread through medieval Europe the metals' prices rose first to a 10 to 1 relationship. The ratio peaked around 14, and then eased back as silver gained value, before averaging around 12 silver ounces to each ounce of gold.

As time went by, silver would continue to be found in greater abundance than gold. As this became more apparent then we see the spread in the differential continue to widen, and in the early 18th century the Royal Mint in London set its ratio at 15.5 to one (which is approximately the geological ratio of silver to gold in the earth's crust too). As recently as the early twentieth century we had gold and silver at a 20 to 1 ratio, when silver was coined as One Dollar and gold was Twenty Dollars in the USA. 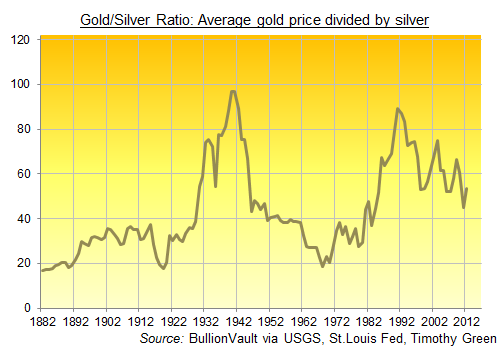 Now however we are looking at the current gold/silver ratio above 53. It sounds high looking at historical standards, but we should be cautious given that gold was only cut free from "official" price setting in the last four decades.

Some people will also point to the January 1980 low of 14 to 1. At that time the silver market was being cornered by the Hunt brothers, making for an artificial – and very brief – low in the relationship. In 1991 we saw the high of 100 as gold hit $412 per ounce and silver remained around the $4 level. In the last ten years we have been as high as 80 and as low as 31.60. 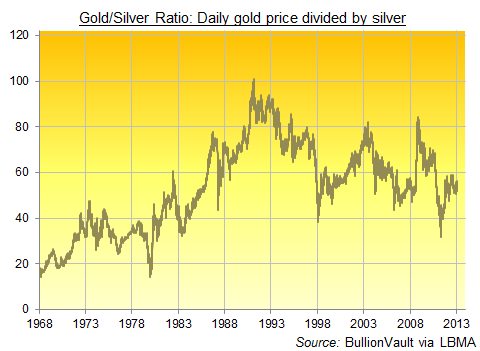 Is this ratio a good barometer of the outlook for silver and Gold Prices? Though both metals are precious and silver is often found with gold they are not blood related. Silver is produced in abundance as a byproduct of many other processes as well. Zinc and copper mining are among some of the principal producers. According to Thomson Reuters GFMS in a report prepared for the Silver Institute, nearly two thirds of the world's annual production of silver is as a by-product.

The same report states that in recent years silver mine production has increased by 25% while gold becomes ever rarer, comparatively speaking, with a slower growth rate of only 6% over a ten-year period. Even with the high price of gold its output can't seem to keep pace with silver. So supply and demand would have us believe that silver is increasingly more available.

So what are these talking heads saying when they believe silver has a better opportunity for price growth than gold? Where do they come up with their belief?

Silver for sure is always in demand and though photography and x-ray film – once the major consumers of the white metal – are quickly disappearing, new and exciting applications have come online. Photovoltaic, a major consumer, came into the fold a few years back. It continues to grow, though it is off significantly from its 2011 high, which still did not reach the annual consumption of silver by the photographic industry in the early part of this century.

All told, Thomson Reuters GFMS states that world industrial demand likely dropped 8% in 2012. And according to the USGS (US Geological Survey) 2011 Minerals Yearbook total US industrial consumption of silver was already down 5% in 2011 from 2010.

So it is the silver investment market that has truly come in to fill the gap. In the same report we read that coin and medal consumption was up 19% in 2011 over 2010 globally. The silver ETPs (exchange traded products) have grown to be holding currently around 623 million ounces, which is 83% of a year's annual production worldwide. And this January the US Mint had record sales of their Silver Eagle bullion coins of 7.42 million ounces as the public fears of currency devaluation weighs heavily on their minds.

Still even with this information can we be certain that silver has more upside? This is a very difficult look into the future. I believe the precious metals class will continue to perform for the foreseeable future, at least another five years while the global economy keeps languishing. The global credit problems are not over. Amongst the major economies, Spain and Italy are in particular distress, and this illness will cause the doctors to keep prescribing easing, or increasing cash liquidity (printing more money).

But what of the fundamental cost of production? The Silver Institute reports a cash cost of $7.25 per ounce for 2011. Using this as a baseline I believe most people would believe silver to be overvalued at today's $30 handle. But that number does not reflect the actual final cost to market of the metal in a form that is ready for consumption. It lacks all the detail necessary to make an informed decision. This is why silver is not trading anywhere near these numbers.

In a very well thought out article, Silver Deceptions: Large Surpluses & Low Production Cost, Steve St. Angelo at SilverSeek argues that the actual cost of production for mining silver is much higher. Using his method of calculation, the cost of production of silver for 2011 should be $28.02 and for gold should be $1359.80. This would mean that silver at a little over a 10% premium at these market levels while gold is at over a 20% premium to today's price.

I guess there you have it. Investors looking for more upside potential in silver than gold might start with that 10% differential in cost of production. Making silver's rise – and a falling gold/silver ratio – well worth a look after all.