END_OF_DOCUMENT_TOKEN_TO_BE_REPLACED

Media rotation of Armageddon is classic bull-market noise. But corporate profit levels aren't...
U.S. STOCKS generally remain on bullish trends in all time frames, reckons Gary Tanashian in his Notes from the Rabbit Hole.
Further, the Debt Ceiling (and government shutdown) theater seems to be playing out in the usual way that these events play out. The stock market has been correcting in an orderly way and seems to be waiting for an inevitable compromise between the White House and Republican leaders.
This of course would spur a next leg up if the usual script plays out after the shutdown ends. That is how it looks, with a traditional bull catalyst (heavy media rotation of an Armageddon-like political event) in play.
Yet there is a negative in play that actually matters, as corporate forward profit guidance is degenerating. Or is it really a negative? Graph from Sentimentrader.com... 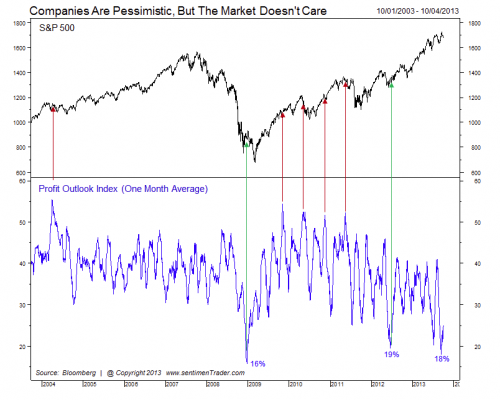 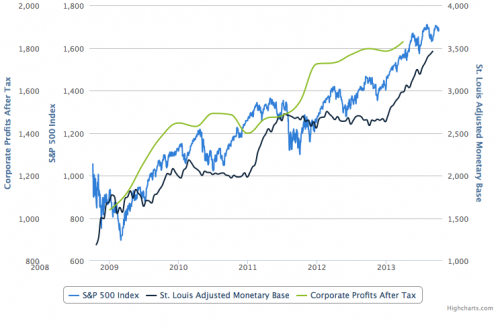 Zooming out to a longer-term view we see that this cycle is far more dependent on 'official' inflation by policy than the preceding cycle (Greenspan's 'inflation bull'), which was fueled by commercial credit that in turn resulted from 'official' policy... 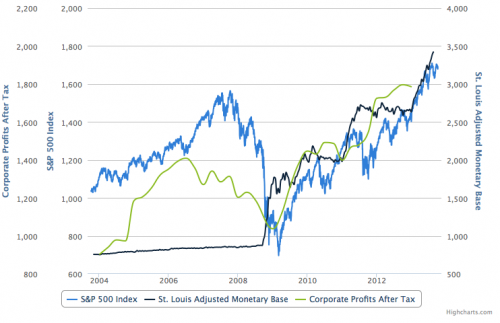 Bottom line? It's inflate or die (4.5 years & counting) for the US market. The proof is in the graphs above, not my bias. There could be a magical disconnect where policy is withdrawn and the economy begins to self-sustain. Again I summon the seminal and legendary singer from Texas, Roky Erickson: "Well, if you want to believe that story you can."
So due to the above, I continue to have a 'trade only' mentality on US and global stocks. I am a chart guy, so I am somewhat bullish. I am a macro economic guy, so I am suspect as I look behind the curtain at that damned wizard.
The technicals on the SPX remain in a bullish price trend, with waning momentum and a price chart that has not even failed the 50-day moving averages. A decline below 1660 would begin to question the bull orientation and then a lower low to the late August low in the 1630's would put things on high alert.
But for now, the S&P 500 remains in a bull trend and leading indexes like the Nasdaq 100 and Russell 2000 are near recovery and all-time highs respectively.