END_OF_DOCUMENT_TOKEN_TO_BE_REPLACED

Good thing for right investments...
YOU have probably heard this already, but if you haven't started your Christmas shopping, it might be a good idea to do so as soon as possible, writes Frank Holmes at US Global Investors.
Shipping bottlenecks are expected to persist well into 2022, driven by slow capacity growth, a shortage of containers and truckers and the ongoing semiconductor chip crunch, which has limited new truck production for last mile delivery.
These "perfect storm" disruptions have created numerous headaches for shipping and logistics companies. But as is often the case, bad news is good news, especially for investors who have seen shares of container lines surge in the 18 months since the pandemic began.
A.P.Moller-Maersk, the world's largest carrier, has sailed up close to 190% in Copenhagen trading. In September, Bloomberg analysts forecast that Maersk's 2021 net income will end up somewhere in the neighborhood of $16 billion, which would be a record for not just the company but for any Denmark-listed company.
(Danish pharmaceutical company Novo Nordisk holds the current record after having reported over $6.5 billion in profits in 2020.)
This is all thanks, of course, to unheard-of shipping rates.
The Freightos Baltic Index, which measures global container prices, currently stands at an average $10,321 per 40-foot container. A year ago, the same container cost exporters only $2231, or about four-and-a-half times less, to ship. To send just one container from Shanghai to Los Angeles, companies must now cough up a jaw-dropping $17,478, according to Freightos. 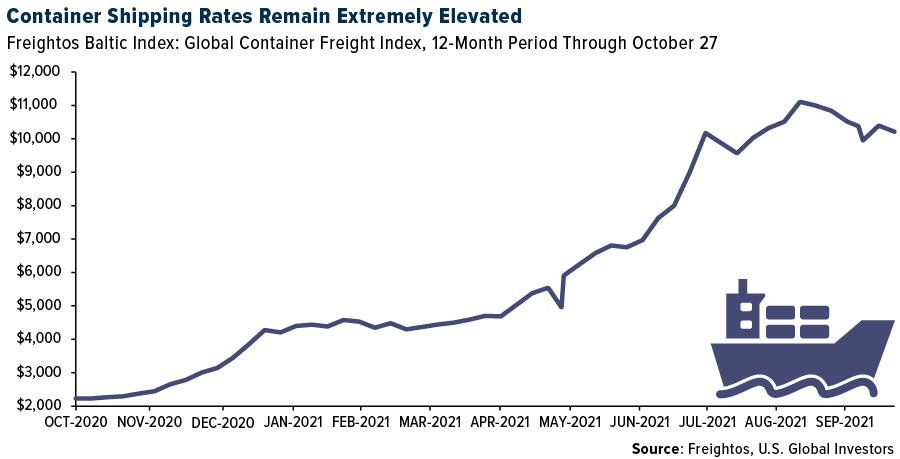 Looking at the chart above, you probably notice that rates are rolling over, and so you may infer that the market is in the process of normalizing.
As much as that would provide consumers with some relief, we could be looking at several more months of global supply chain disruptions.
That's according to research by Morgan Stanley, which said in a report last week that "the market may stay peaked for longer." The investment bank expects shipping revenues to stay elevated at least through the second quarter of 2022. Quarterly earnings, then, may not have peaked yet, leaving plenty of upside potential for investors who seek to participate.
And then there's the chip shortage. Like nearly everything manufactured today, new trucks don't work without chips. This has hampered production.
President Joe Biden recently brokered a deal with ports in Los Angeles and Long Beach to remain operating 24 hours a day to help alleviate the shipping bottleneck, but if there aren't enough trucks and truck drivers to move containers, then it doesn't matter how late the ports stay open.
At one point Last week, as many as 100 ships – an all-time record – were waiting to unload their cargo outside LA and Long Beach, which together account for 40% of all containers entering the US.
Long story short, supply chain disruptions may be the new normal for at least the next six to 12 months.
This will cause logistics companies all sorts of headaches, but it could end up being very profitable for investors.
It's important for investors to be aware, though, that everything I've said up to this point deals strictly with the short-term. Global trade and shipping are part of a long-term secular story, at the center of which is the global middle class.
So far this century, trade has steadily increased with few interruptions as the number of people classified as middle class has continued to expand, particularly in China and India.
Although the pandemic has stalled household income growth in some regions, an incredible 1 billion Asians are forecast to join the middle class by 2030, according to the World Data Lab. Most of these 1 billion people will seek a middle class lifestyle filled with middle class furniture, appliances, gadgets and more, all of which should support shipping and logistics companies years into the future. 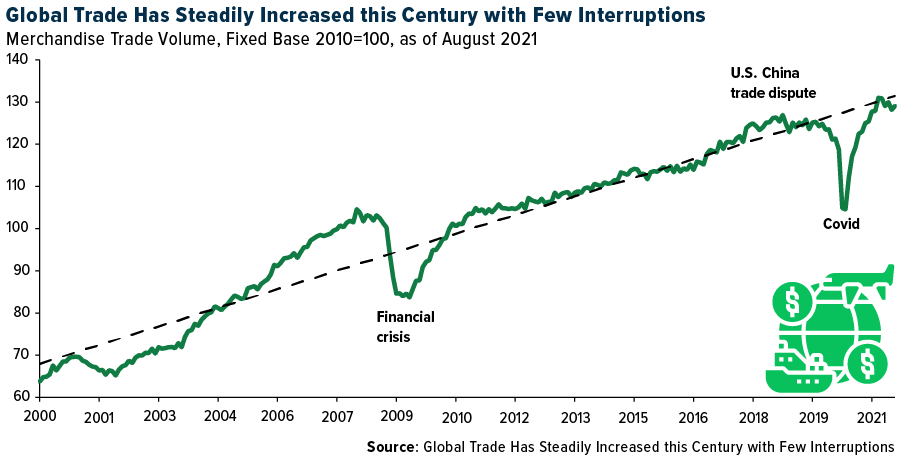 It's not just ocean freight that looks attractive right now. Air cargo companies are also benefiting from increased consumer demand, with cargo volumes up 7.7% in August compared to the same month in 2019, according to the International Air Transport Association (IATA). This is down slightly from 8.8% growth in July, but still a very solid report.
As for commercial air passenger volume, I'm pleased to see daily traffic as reported by the Transportation Security Administration (TSA) begin to recover following the Delta-impacted summer months. We're still down some half a million daily passengers from 2019 levels, but the 50-day moving average suggests we're in a growth stage.