END_OF_DOCUMENT_TOKEN_TO_BE_REPLACED

Once more, with feeling...

ON MONDAY THIS WEEK Bill Bonner offered his new "Trade of the Decade", reports Eric Fry from Laguna Beach, California for The Daily Reckoning.

In all probability, this trade will not deliver a result as dazzling as his last "Trade of the Decade", starting in Jan. 2000 when Bill urged the Daily Reckoning faithful to "sell stocks; Buy Gold."

As fate would have it, stocks produced a LOSS during the ensuing ten years, while the Gold Price quadrupled. Good call!

Bill has now gazed into his crystal ball once again, and he is offering a brand new Trade of the Decade: Sell US Treasury bonds; buy Japanese stocks. Here in California, we heartily endorse Part I of this trade (while professing agnosticism on Part II).

Because Treasuries are indeed a "sell".

In fact, Treasuries have been a "sell" for several months already. In the year just passed, long-dated Treasury securities produced their biggest annual loss since 1978. During the month of December, alone, yields skyrocketed along the entire yield curve, as price tumbled. 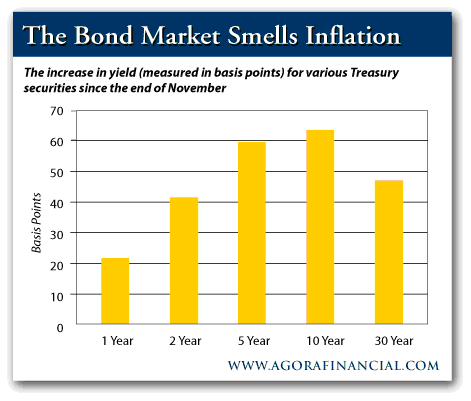 "President Barack Obama is borrowing unprecedented amounts for spending programs," Bloomberg News reports. "US marketable debt increased to a record $7.17 trillion in November from $5.80 trillion at the end of last year."

This disturbing trend leads economists Brian Wesbury and Robert Stein to conclude that "Government" will be the first major bubble of the new decade.

"Some claim a bubble has already formed in the global stock market, with prices up 60%-plus since the bottom in early March," the duo observes. "Others claim commodities will be the next bubble...Still others say US Treasury securities are already in a huge bubble, with interest rates way too low. But maybe the worst bubble has nothing to do with the private sector at all. The public sector, particularly the federal government, has benefited enormously from absurdly low interest rates.

"Think about it; the federal deficit was $1.4 trillion in the fiscal year that ended in September, or 10% of GDP, the largest peacetime deficit on record. But net interest – the cost of servicing the national debt – was only 1.3% of GDP, the lowest in about 40 years. For comparison, net interest was absorbing about 3% of GDP in the 1980s and 1990s."

Unfortunately, the skeptical economists observe, the government is relying on low-cost, short-term financing, which creates the delusion that "a massive increase in government spending [is] an easy burden to carry...Just like homeowners who relied too much on short-term adjustable rate mortgages, the federal government's average debt maturity remains less than 4.5 years, which means net interest costs will soar over the next several years as the government rolls over its debt at higher interest rates."

Maybe the US Treasury pulls off this financial miracle without a hitch. But we would take the other side of that bet. The Treasury auctioned off $118 billion of Treasury notes during the last week of 2009 – a record quantity. We predict this record will fall in 2010...several times. As these monstrous auctions sweep through the bond market like rogue waves, interest rates are sure to rise.

To repeat: Treasuries are a "sell."