END_OF_DOCUMENT_TOKEN_TO_BE_REPLACED

It will be at least two years until US savers can expect positive returns from cash...

US FEDERAL RESERVE Chairman Ben Bernanke shocked the world last week – or at least that portion of the world that tries to save money and earn interest – by announcing he would suppress short-term interest rates to near-zero until 2013, writes Dan Amoss for the Daily Reckoning.

Last Wednesday, the Chairman and his colleagues announced:

The [Federal Open Market] Committee currently anticipates that economic conditions – including low rates of resource utilization and a subdued outlook for inflation over the medium run – are likely to warrant exceptionally low levels for the federal funds rate at least through mid-2013.

Applying this perspective to monetary policy, the Fed promises – i.e., threatens – to maintain its failed policy of suppressing short-term interest rates, thereby punishing savers and promoting debt accumulating and consumption. This is an inflationary policy, which will continue to fuel the cost pressures that are already unfolding at many US businesses.

The 2-Year Treasury note yield collapsed to below 0.2% in the wake of the Fed's policy announcement last Tuesday. As recently as April, when the 2-Year note yielded 0.75%, the market was expecting Fed rate hikes at some point before 2013. 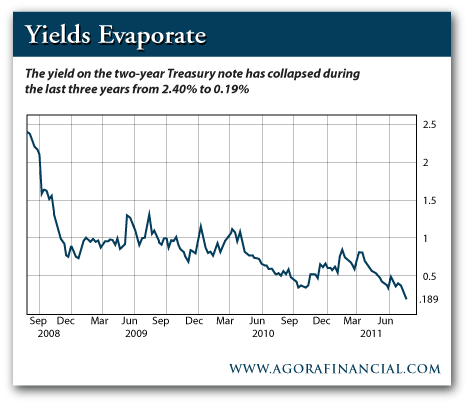 With this week's announcement, the Fed pinned the front end of the yield curve to zero. This action will act to lower the average interest rate of the national debt over the next two years, which is a wealth transfer from savers to the federal government.

This is all part of the "financial repression" as outlined by Bill Gross of PIMCO: savers' wealth stored in banks and Treasuries will be clipped by a few percent per year, as rates remain well below inflation. This inflation tax is a wealth transfer to the government as it gets to spend the newly created money first, before it gets transmitted through the banking system (losing value in the process).

Fast-forward to mid-2013: short-term rates are still near zero (in accordance with the Fed's new guidance) and the national debt has grown from $14.3 trillion to more than $16 trillion. In 2013, the cost of this debt will depend more than ever on the Fed's interest rate policy. As a result, the Fed will come under extreme political pressure to keep rates at or near zero.

There is a huge cost to the Fed's decision on Tuesday: it has given away its ability to hike short-term rates in the event of a US Dollar crisis. If foreign creditors accelerate the pace at which they're already diversifying out of the Dollar, inflation may pick up to uncomfortable levels. While the "money velocity" of domestically held Dollars may remain low in a sluggish economy, the velocity of Dollars held outside the US is likely to increase.

While banks and bond investors have renewed confidence that short-term rates will be near zero for the next two years, the Fed hasn't bought itself a free lunch. Foreign creditors will continue to lose confidence in the US Dollar as a store of value. The Dollars that exist outside of the US as a result of past trade deficits – along with the future Dollar "exports" – will not remain as sequestered as they have in the past. Their owners will look to exchange them for something with a better chance of preserving their purchasing power: gold, oil projects, farmland, mines, or blue chip stocks.

The Fed is gambling that these creditors will prefer stocks as a store of value. But given the past two weeks of trading, I'm not so sure about that. And how did QE2 ultimately work out as a market-propping manipulation? Where is the Russell 2000 now, Mr. Bernanke?

One thing is for sure: hoarding gold, oil, and other industrial commodities is now an even more attractive proposition than it was prior to last week's announcement from the Fed. Savers now know there is little chance of earning a positive real return until 2013.

Thanks for nothing, Ben!

Looking to preserve your money's purchasing power by Buying Gold? Discover how BullionVault can make it more cost-effective...