END_OF_DOCUMENT_TOKEN_TO_BE_REPLACED

Rising rates, growing investment...
AFTER a challenging 2020 due to the pandemic, foreign direct investment (FDI) has been flowing into Russia this year, writes Frank Holmes at US Global Investors.
Among the reasons is the fact that it offers positive real rates compared to other Central and Eastern European (CEE) countries. At a time when most countries are keeping rates near zero to combat the negative effects of the health crisis, the Bank of Russia is in tightening mode, having raised rates five times so far in 2021, most recently on September 10.
This has attracted investors looking for higher yielding instruments.

The Russian economy has also been supported by stronger oil and gas prices.
The price of Brent oil, the international benchmark, has increased about 75% this year, which has supported some of our favorite Russian oil exploration and production companies.
We believe Russia's extra revenue from the sale of oil and gas will be spent on social benefits that will further boost the economy and improve living conditions.
It's important that investors not get distracted by FUD, or "fear, uncertainty and doubt". Russia gets a lot of negative press, but did you know its stock market is beating the S&P500 so far in 2021?
Whereas the US market has returned approximately 20% through September 14, the MOEX Russia Index has increased more than 31%.

And we think there could be more gas in the tank, so to speak.
Besides the recovery in oil prices, the Russian market could continue to benefit into 2022 from an easing risk of international sanctions and an influx of retail investors.
What's more, the Russian market still looks highly undervalued relative to other regions, making it potentially attractive to value investors. Below you can see select economies' current price-to-earnings (P/E), which tells you how "expensive" an index or stock is. 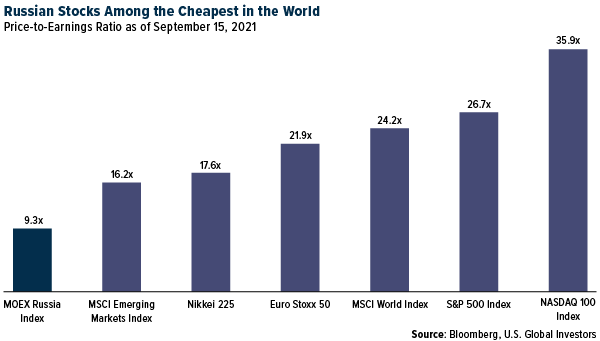 As of mid-September, the Russian stock market was trading at a little over nine times earnings, putting its valuation well below other emerging markets, not to mention developed markets such as Japan, Europe and – most notably – the US.
Russia has also offered some of the most attractive dividend yields relative to other regions. As of September, Russian stocks had a trailing 12-month dividend yield of 4.45%, almost double the yield of the emerging markets universe on average.
Big picture, we think the entire CEE region is interesting for a variety of reasons. It shares the same continent as the more established economies of Western Europe, but it also has a lot in common with other emerging markets around the world – particularly east Asia, as the two regions are important manufacturing hubs.
In a few instances, this has translated into strong sustained growth. Take Poland, for instance.
Before pandemic-hit 2020, the country's economy expanded for nearly 30 years straight. In 2017, Poland was upgraded by FTSE Russell from Emerging to Developed status, making it the first country to make the transition in nearly a decade.