END_OF_DOCUMENT_TOKEN_TO_BE_REPLACED

Possibly even moving in the direction of smart...

FROM time to time I like to see if there is any evidence that Russia's central bank is getting a grasp of basic currency management principles, writes Nathan Lewis of New World Economics in this story originally published at Forbes.com.

This has quite a bit of significance beyond the immediate macroeconomic effects: Russia, along with China, has some ambitions to play a leadership role in the monetary arrangements of the near future.

Also, the principles that apply to Russia and the Ruble apply to all central banks – and a lot of central banks, especially in the emerging markets, are facing a bit of challenge these days.

But the importance goes beyond even this. The reason that the global gold standard system of the Bretton Woods era blew up in the early 1970s was not because it was producing bad results and people decided to try something different. This was after two of the most prosperous decades of the entire twentieth century, in the US and around the world. No, they wanted to keep it – certainly the Europeans and Japanese, and even the chairman of the Fed himself, Arthur Burns.

The reason Bretton Woods blew up is because they didn't know how to keep it – in other words, how to manage it properly to produce the desired result. It was pure ignorance, and I've tried to document some of that. The same kind of ignorance is still with us today, as exemplified by Russia's central bank, and pretty much all the others too.

I find that the Central Bank of Russia doesn't seem to be quite as smart as I hoped – but also, not as dumb as I feared. I think there is some capability for learning, which is more than you can say about most governments.

The CBR uses a dual-currency basket (presently 0.55 USD and 0.45 EUR) as a guide to policy, so we will use that as our currency reference. 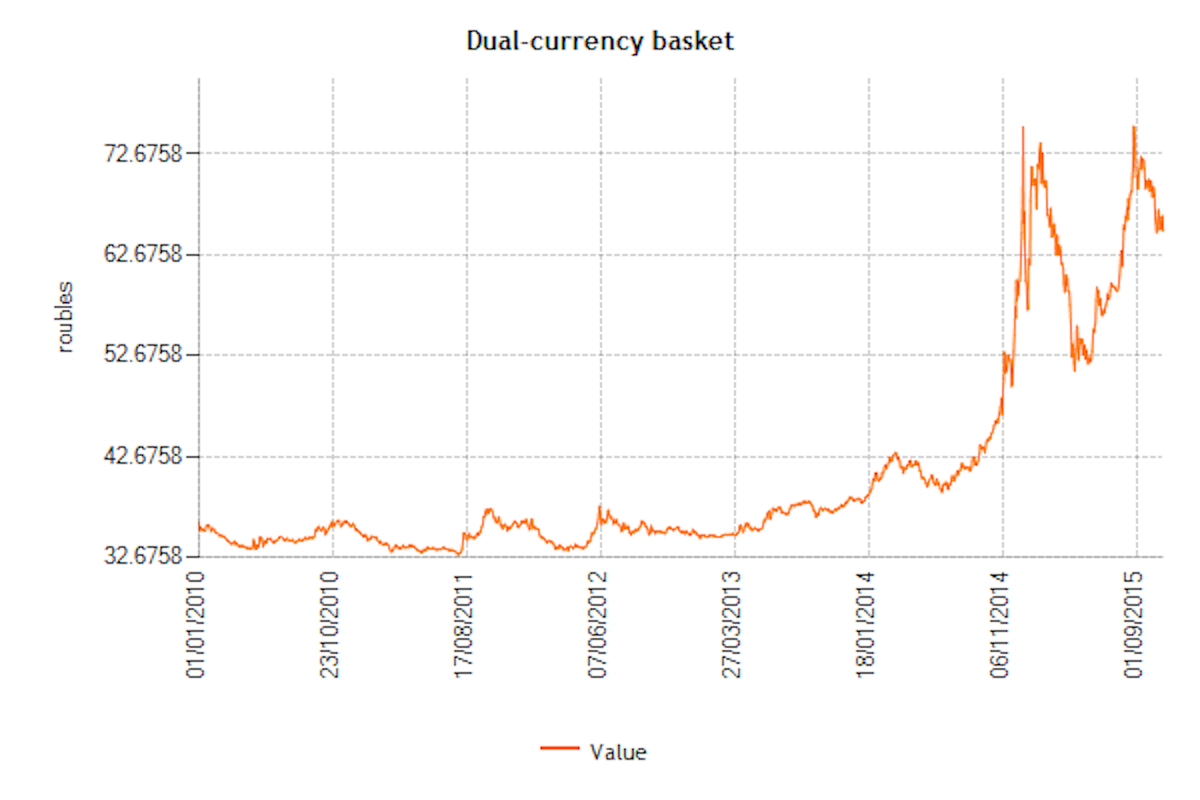 In our last update, in December 2014, we found that the CBR was making a right proper mess of things, in the way that central banks normally do – and as the US also did in the late 1960s and early 1970s. Although it was "intervening" in the foreign exchange market, actually rather aggressively, there was no corresponding adjustment in the monetary base. The sale of $29 billion in foreign reserves in October 2014 should have been matched with a shrinkage of the monetary base by the equivalent Ruble amount. It was not.
http://www.forbes.com/sites/nathanlewis/2014/12/19/its-official-elvira-n...

This is not just my funny notion. This failure to make appropriate changes in base money is exactly what Milton Friedman and Robert Mundell identified in 2001 as the critical error of "pegged" arrangements worldwide, and why they tend to blow up. I wrote about this topic in great detail in Gold: the Monetary Polaris (2013).

Indeed, the CBR did exactly this in early 2009, and it worked just as promised. So, they should have known about it in 2014. But, people are a little stupid.

Since the beginning of 2015, the monetary base did contract, in a small but meaningful way. The Ruble shot higher in value. However, beginning May 14, the central bank began to buy (not sell) Dollars on the foreign exchange market, a little bit each day. The monetary base also began to expand. This was a clear sign that the central bank was not interested in having the Ruble rise any more. Not surprisingly, it then fell again. 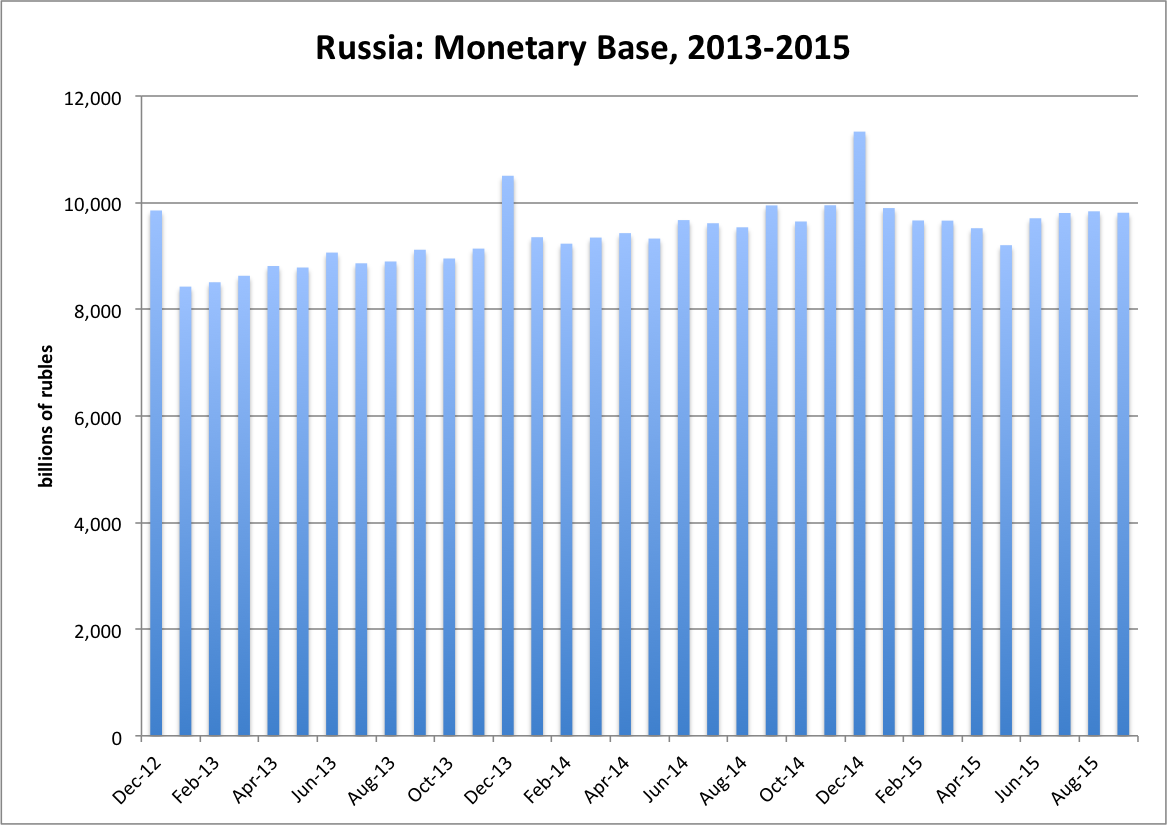 Since then, the monetary base has been roughly unchanged. I think it is significant that the growth rate has slowed substantially from previous norms. This caution was not at all apparent in 2014, when the monetary base continued to grow at around an 8%-per-annum pace even as the currency was embroiled in crisis. 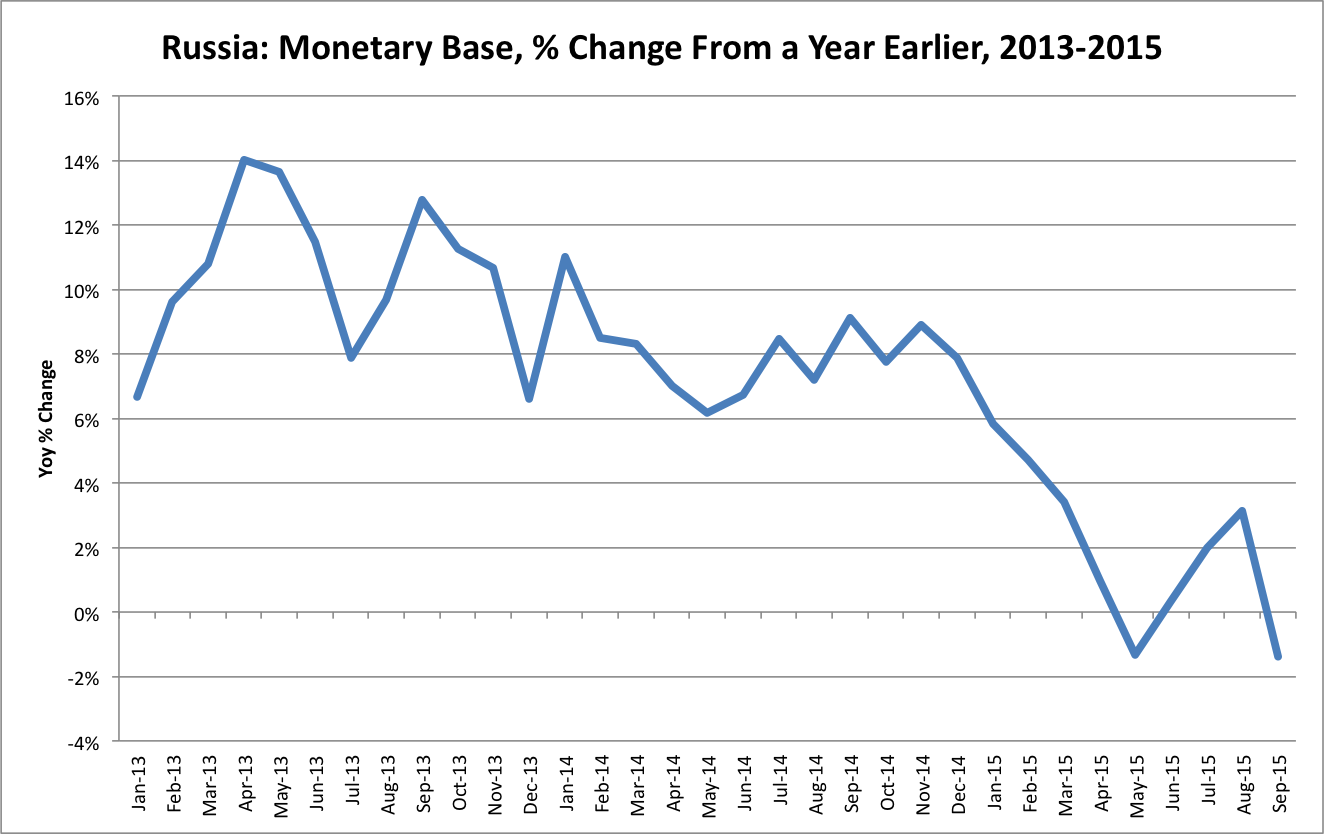 Leadership is good, but nobody wants to be led by doofuses. In the future, we will have a better monetary system than we have today – ideally, one based on gold. But before then, we need a basic grasp of currency management principles.

Otherwise, our new arrangements would end up just like the Bretton Woods gold standard: Everybody agrees it is a good idea, while it goes up in flames everywhere.