END_OF_DOCUMENT_TOKEN_TO_BE_REPLACED

BREXIT has dominated world headlines for the last couple of weeks, and with good reason, writes Frank Holmes at US Global Investors.

The UK's historic referendum has already roiled markets around the globe; raised serious questions about immigration, trade and diplomacy; cast a harsh spotlight on the EU's avalanche of rules and regulations; and divided member states on the best way forward.

Among other far-reaching consequences, Brexit could end up causing Europe to rethink its sanctions policy against Russia, following a vote in Brussels last week to extend them another six months. 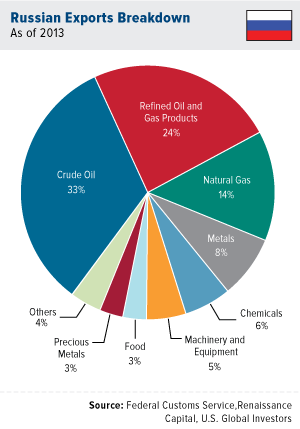 Nearly everyone agrees that Russia and President Vladimir Putin are among the winners because of Brexit. The UK is the EU's most vocal critic of Russia's 2014 annexation of the Crimean Peninsula and was instrumental in the decision to levy sanctions against the country's financials, energy and defense sectors two years ago.

Several EU countries, including Austria and Hungary, have expressed interest in lifting, or at least softening, sanctions, as they can no longer afford to miss out on trade with Russia. Countries that have faced difficulty offsetting lost trade opportunities are Finland, Poland and the Baltic states – Latvia, Estonia and Lithuania. The French parliament recently adopted a resolution to urge Brussels to drop all sanctions. Italy's Upper House of Parliament, meanwhile, approved a resolution opposing any automatic renewal of sanctions.

In the long term, this bodes well for Russia's economy, which has been hammered by not just sanctions but also falling oil prices during the last two years. In 2013, energy accounted for 70% of all exports, with crude alone representing a third. What's helped keep oil producers profitable is the weakened ruble, which has lowered labor costs while making exports more competitive.

Estimates vary as to which has done more damage to the country's currency – sanctions or the drop in Brent oil. As I've pointed out before, there's a clear correlation between the ruble and oil prices. 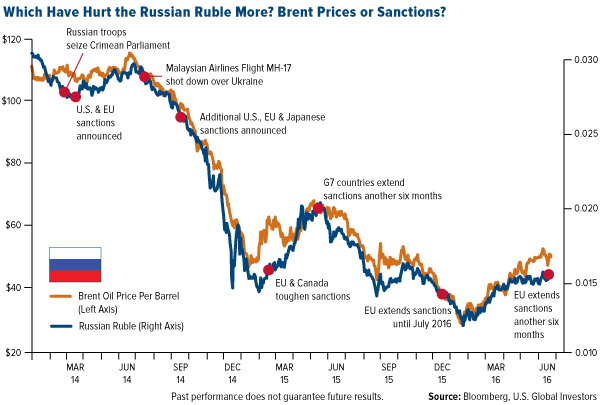 But sanctions have made their own significant impact. According to the International Monetary Fund (IMF), trade restrictions were responsible for a 1.5% decline in Russia's gross domestic product (GDP) in 2015, with the effects intensifying the longer they're in place. The Economic Expert Group, a Russian fiscal policy consultancy, estimates that between 2014 and 2017, international sanctions and the plunge in oil prices will cost Russia a whopping $600 billion. A large% of this includes capital flight, though we've seen its rate slow since sanctions were first announced. Renaissance Capital believes $45 billion will leave the country this year, an improvement from the $64 billion lost in 2015 and $125 billion in 2014. 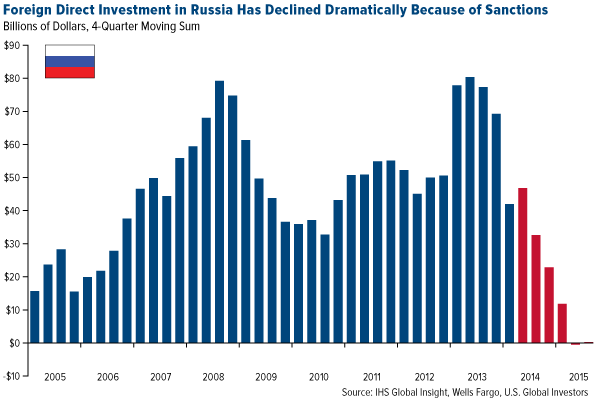 Exports have likewise taken a huge hit. In April, exports fell to $21 billion, a 28% decline from the same time a year earlier. 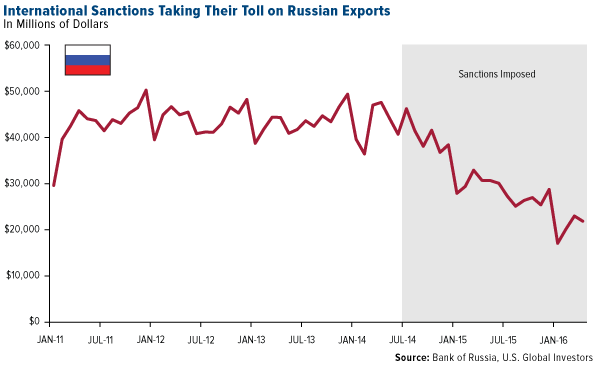 Just as the UK won't officially leave the EU for another two years, the removal of sanctions won't happen anytime soon. As I said, EU officials already voted last week to extend them another six months. Many people, including Putin, doubt whether Brexit will materially change Russia's relationship with the European trading bloc.

(On a side note, it's interesting that even Putin recognizes why Brits voted the way they did: "No one wants to feed and subsidize weaker economies, support other countries, entire peoples," he told reporters on Friday.)

However, there's mounting pressure among individual EU member states to drop or at least soften sanctions, and with Britain, the bloc's strongest supporter of restrictions, voting to leave, an opportunity to revisit terms could surface sooner than expected.