END_OF_DOCUMENT_TOKEN_TO_BE_REPLACED

Ideas for a better future...

THE BOXES were all packed, writes Addison Wiggin for the Daily Reckoning.

The pictures of Mises, Hayek and Rothbard had come off the wall they'd adorned since 1997 in Suite 203 in the Cannon House Office Building. A maintenance crew stood outside, garbage cans at the ready, perhaps a little too eager to swoop in and finish the job of making way for the next occupant.

Rep. Ron Paul was moving out. We had the privilege of meeting with him on Wednesday, Nov. 14, moments after delivering his final speech on the floor of the House – the one in which he declared the Constitution had failed in the Founders' stated objectives.

The speech is now a matter of public record… as are transcripts of the testimony from every hearing the good doctor presided over as chairman of the House Subcommittee on Domestic Monetary Policy and Technology during his final term.

Our friend Nathan Lewis, author of Gold: The Once and Future Money, testified at one of them last August. He suggests Dr. Paul carefully crafted those hearings with an eye toward leaving something behind for the next generation. "The ideas will be on the public record, even if they're never implemented in our lifetimes."

In addition, Lewis believes the ideas do have a contemporary audience – overseas. "People in emerging markets pay attention long before Americans do."

Case in point: the flat-rate income tax pushed by Steve Forbes during his 1996 presidential campaign. It's now the law of the land in dozens of countries.

We should preface what follows: We are not advocating a flat tax. We are saying that if politicians really wanted a way to pull back from the "fiscal cliff"… and put the government's finances back on a semi-sound footing...they would stop arguing over trivia and implement a flat tax next week. You might want to keep that in mind as you witness the circus in Washington leading up to year-end.

The first comprehensive proposal for a US flat tax came in the 1985 book The Flat Tax, by economists Robert Ernest Hall and Alvin Rabushka.

"Today, the flat tax idea is perhaps even more politically remote, in the United States, than it was in 1985," Mr. Lewis says. "However, the rest of the world caught on to the idea. Today there are at least 40 governments with flat tax-type systems, most of which made the switch in just the last decade."

A sizeable number of these countries used to lie behind the Iron Curtain. Messrs. Hall and Rabushka served as consultants to many of those governments as they implemented a flat tax. 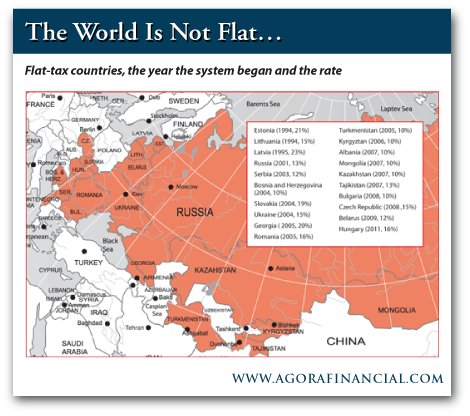 Is the flat tax a panacea? Hardly. Central bankers can still muck up the works; thus, many of these countries were swept up in the Panic of 2008.

But "we could take 2007 as a representative pre-crisis year," Mr. Lewis suggests. "How did the flat tax countries do then?

Lewis further studied 10 countries from which International Monetary Fund data are available, examining the flat tax's impact on overall revenues. Revenues rose an average of 17.7%… and that's after throwing out Estonia's outlier increase of 81%. Only the Czech Republic saw revenue fall – by a minuscule 0.5%, as crisis encircled the globe in 2008.

How about revenue as a percentage of GDP – a favorite measure of policy wonks? That looks good too. On average, the ratio was virtually unchanged in those 10 countries – down 0.1%.

"Most of the seemingly impossible promises of the flat-taxers – higher growth, stable revenue/GDP ratio, rising government revenue – are, in fact, common and repeatable," Mr. Lewis concludes.

Meanwhile, back in Washington, the politicians argue about how to prevent – prevent – automatic tax increases and spending cuts totaling $607 billion, which would barely cut the deficit in half.

As the holidays approach, we encourage you to spend it with your family and not stay glued to the TV for the minute-by-minute negotiating nonsense.

Looking to buy gold? Save money by using BullionVault...