END_OF_DOCUMENT_TOKEN_TO_BE_REPLACED

A glimpse into our deflationary future, now with added robots...!
The POST-BREXIT bounce in markets caught nearly everyone by surprise…myself included, writes Vern Gowdie in The Daily Reckoning Australia he edits with Greg Canavan.
The promise of sufficient stimulus to float a boat to the moon was enough to hit the 'buy' button, pushing the Dow to a record high and bond yields deeper into the negative.
The only genuine prospect of further stimulus (over and above what is already being applied in the various corners of the world) appears to be coming from our old mate, Japan's PM Shinzo Abe, and his trusty yes-man, Bank of Japan (BoJ) Governor Haruhiko Kuroda.
After Ben Bernanke's (former US Fed chief) recent visit to Japan, the rumour mill has been working overtime, ruminating about an imminent announcement of 'helicopter money' to kick-start the permanently stalled Japanese economy.
My guess is that Abe and Kuroda are not quite desperate enough – yet – to go the 'Full Stimulus Monty', raining money down on the good citizens of Japan. The problems with giving money out to all and sundry to spend on 'stuff' – like Rudd and Swan did – are simple: When do you stop? What happens if they save instead of spend? And, finally, can Abe's political rivals 'up the ante' and promise to shower the people with an even bigger handout?
Abe & Co are going to hit the stimulus button…again. But it will likely be in the form of some tub-thumping announcement, like massive infrastructure spending. Like all previous attempts to ignite the consumption fires of its citizens and move that inflation needle off the zero line, this next grand scheme is also destined to fail to achieve its objective.
Japan is in a deflationary spiral. Debt (the greatest public and private debt load on a percentage-to-GDP basis in the world) and demographics (an ageing and declining population) are two powerful forces from which no amount of 'stimulus' has been able to combat.
Japan is a template for the rest of us. Low interest rates. Growing debt levels. Declining population, with an increasing percentage of older (and economically less productive) citizens.
The debt loads in the Western world have been well documented…we are buried under an Everest-like mountain of red ink. Each passing year sees trillions more added to our history-making debt levels.
These debts (primarily) were incurred during the baby boomer golden years. But that was the past; what about the future?
The following graph is a bit busy, but if you take the time to 'get it', you'll have a glimpse into our deflationary future. 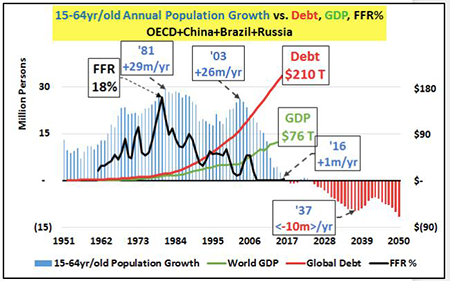 The blue bars represent the 15-64 year-olds in the economies of the OECD, China, Brazil, and Russia.
This age group is recognised as being the most economically productive in a society…we need workers to produce 'things' and pay the income taxes that support government spending programs.
During our debt accumulation years there were plenty of new workers coming through, taking their place as the debt slaves of tomorrow. In the coming years, the economically productive demographic will shrink. You don't need to be Einstein to figure out that this is not good for future growth.
The red line is the Everest-like debt level we owe – US$210 trillion and counting.
The green line is global GDP. The level of economic activity supporting the debt load. Note the widening gap between debt and economic activity started in the early 1980s, and that it keeps getting wider…this gap is best described as the 'jaws of financial death'.
The black line is the FFR (Fed's Fund Rate). The US cash rate peaked at 18% in the early 1980s; since then it's been on a downhill run to almost zero. Obviously lowering the cost of borrowing money has aided and abetted the exponential rise of the red line (our debt levels). But the question is: 'Where to from here?' Can rates go lower? Perhaps they can go into the negative…but only slightly.
So there you have it – a future that begins with the highest debt burden in history, the prospect of a falling number of people available for productive employment, and the room left to move on interest rates (the cost of that debt load) is, at best, minimal.
The golden years are behind us. Now we are dealing with these deflationary pressures within the system.
While the official data might say we have inflation, on the ground there are signs the tightening vice is having an impact.
'Hard-up police officers forced to moonlight as YOGA TEACHERS due to 'paltry' one% pay rise' – read a headline in the UK Mirror on 23 July 2016.
According to the article, more and more police officers are seeking a second income to make ends meet: '…the Police Federation – which represents rank and file officers – this month condemned a "paltry and insulting" one% pay hike. The Federation's chairman Steve White has called second jobs a "sad reality" because of financial pressures facing many of its members.'
Why are people facing financial pressures? Because it's human nature to seek to improve our lifestyles. We have been encouraged to live beyond our means…which is evident by the high levels of personal debt in the system.
Why are police officers only being given a 1% pay rise? Because tax receipts are falling and governments need to rein in expenditure. A vicious cycle.
With government budgets under pressure, we see this type of headline at  AOL, 15 July 2016:

"Oldham Council has become the latest to cut bin collections to once every three weeks, raising fears of rats and other vermin.
"Following the lead of several other Greater Manchester councils, it is reducing the collection of general waste to try and save £1.5 million a year in landfill costs.
"...'Due to government funding cuts over the last few years Oldham Council has had to change the way our frontline services work. These changes to our waste collection service are the latest but we are confident they will continue to provide value for money,' says councillor Barbara Brownridge, cabinet member for neighbourhoods and co-operatives.
"...'Over the next two years the council needs to make £37 million worth of savings. Making these changes will help avoid further costs putting even more pressure on the council's budget. Doing nothing is not an option.'..."

The health and hygiene we've become accustomed to in the developed world might be compromised in a world where governments look to cut back on services, due to falling tax revenues.
A growing threat to government revenues and expenditures is the gradual uptake of automation within businesses. Robots do not pay income tax. Displaced workers claim unemployment benefits.
Reuters ran an article on 21 June 2016 entitled 'Europe's robots to become "electronic persons" under draft plan'. Europe is in the teeth of the deflationary storm, so it comes as no surprise that the bureaucrats are looking at all avenues to raise tax receipts. The owners of these 'electronic persons' may soon be liable for 'paying their fair share'...

"Europe's growing army of robot workers could be classed as "electronic persons" and their owners liable to paying social security for them if the European Union adopts a draft plan to address the realities of a new industrial revolution."

And finally, there were the headlines in the UK press last week of banks warning customers that they may soon be charged with keeping their money in the bank.
Charging people to keep money in the bank only feeds into the deflationary loop. People aren't stupid. Why wouldn't they withdraw their money and deposit it back into a safety deposit box?
All those conservatively-minded retirees, seeking a degree of security for their retirement funds, are being starved of income from the traditional safe haven options. They are being forced to chase yield – and that is fraught with ever-increasing levels of risk. If that risk turns into substantial capital loss, they have less to live on. Alternatively, they 'suck it up' and learn to live on less income from their bank deposits. Either way, retirees (a growing sector of society) are going to be spending less in the future.
Debt and demographics are baked into the cake.
Deflation is not coming; it's already here…hiding in plain sight.