END_OF_DOCUMENT_TOKEN_TO_BE_REPLACED

Risk is now off. Meaning big changes in the borrow-to-buy-assets cycle...
I DON'T know how to put it any more clearly than this, writes Gary Tanashian in his Notes from the Rabbit Hole.
Risk is off.
One year ago we were wrapping up a phase of 'risk off' and anticipating a return to a bullish market due to technical support, election-year dynamics, and most importantly a brutally unsustainable negative sentiment backdrop in the wake of the Greek/Euro meltdown theatrics.
Fast forward to today, and we have been anticipating a change to bearish in US markets as technicals became very over bought, leading markets declined and sentiment came to the exact opposite (over bullish) extreme to one year ago.
Last year the wild card element to a bullish picture was the election year cycle and in particular, a sitting Democrat election-year cycle. This year the wild card is something more powerful; the unwinding of US and global credit markets in a massive repudiation of debt by the withdrawal of its feeder, credit. In a leveraged global economic structure it is credit that fuels the machine.
It's an 'organic economy' or it's 'organic growth' you say? As credit continues to be withdrawn we'll see how organic it is. Really, this is the single silliest thing I have ever seen in print in the financial blogosphere. The economy has been sprayed with myriad toxic elements to try to get it to grow. The system is mutating, and the Fed is the Monsanto of the financial world. Consumer spending is like genetically engineered corn; it'll feed you but it is part nature and part laboratory (Read: a consumerist experiment).
Of course, this space is also promoting the viability of the 'Taper to Carry' (or T2C, the latest in a line of NFTRHisms – some prescient and some ill-conceived – in the tradition of Armageddon '08, Hope '09, i2K12, etc.) thesis.
This would theoretically see an attempt to revive the economy with a built-in profit motive for the banks providing the thrust, as they borrow zero-rate-manipulated funds for free and lend out at higher interest rates – compliments of the now rebelling US Treasury bond market – to the public and business enterprises. 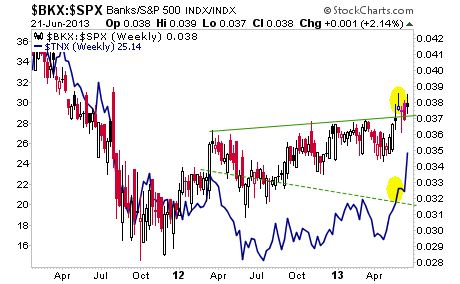 10-year US Treasury yields are well into breakout mode now and the Banks continue with their breakout as measured in S&P 500 units. So far so good.
Before 'T2C' takes effect however, rising interest rates (bond market declines) across the board could signal that the game is changing; and in my opinion it is changing for the better. That is because linear thinkers and followers of convention will not be able to hide in bonds this time, as if it is just as easy as 'risk off...so buy bonds'. Lazy thinking is going to be punished.
Stock bulls should learn about the pitfalls of following convention as well, because with the funding mechanism (credit, debt... bonds) under stress, the media creation known as the Great Rotation (from bonds to stocks) is not likely to work out in the short-term.
What makes this environment interesting is that even gold is being liquidated (whether forcibly through mass margin calls or of free will) and there seems to be nowhere to hide. A dishonest system is coming apart at the seams. What better environment for honest money to be taken to the woodshed for the first slaughter of its bull market?
Gold should be watched first and foremost for signs of what may be ahead. The liquidation of the gold bugs, when we strip out all of the emotion and excuses, is in the final analysis an indicator on the macro and on other markets. In this case, gold seems to be indicating that inflation bulls have been wrong. If there is to one day be a new inflation that actually takes (born of T2C for instance?), gold prices should indicate as much. Otherwise, get ready for increasing deflationary pressure.
So we will watch for either a real deflation as the system attempts to service exponential levels of debt or a new phase of the ongoing inflation attempt, which would be our T2C plan. In this scenario, monetary inflation (via ZIRP and QE) would transition to cost and price inflation as the funds are sent out into the economy.
Deflationists are all about the velocity of money, which has been stuck in the mud. A theoretical 'carry trade' by the banks would be an attempt to relieve this issue.
It is debatable that T2C would work, or that it would work to desired outcomes (like economic benefit as opposed to stock, commodity, precious metals and/or other asset price increases), but an attempt may well be made in some form close to what we are projecting with the 'taper to carry' thesis. Meanwhile, risk is OFF.